When it first opened in 1984, La Cage Aux Sports quickly became one of my favorite restaurants. And why not?  What more could a rabid sports fan ask for than a dining spot with a cool menu and all the big games on screens throughout the establishment. My standard order was the chicken and ribs combo, with fries on the side.

Well it had been a few years since I last stepped foot in the place, but the opening of a brand new $3 million location in the heart of the Quartier des Spectacles and  within Complexe Desjardins peaked my curiosity.

Since June 2015, the chain of restaurants have become known as  La Cage – Brasserie Sportive.  Owners Groupe Sportscene wanted to revamp the customer experience and create a more current brand in order to attract a younger clientele.  President and CEO Jean Bédard believes this plays a major role in ensuring a bright future for the company while still retaining its most loyal clientele.  Everything was redone and improved to reflect La Cage’s new positioning, from the menus to the logo, interiors and servers’ uniforms. The idea was to align the brand identity with the food offering, making La Cage a more modern brasserie sportive with a clean design that will appeal to a greater number of fans.

Claire Couturier, La Cage’s head of communications, was kind enough to meet me at the new Complexe Desjardins location.  The street-front restaurant and terrace employs nearly 200 staff and features a 260-seat capacity, with 40 seats on the seasonal terrace.

“We are proud that we could convince Complexe Desjardins management to pick our chain,” explained   Bédard. “With its tasteful freshness-first menu created by chef Louis-François Marcotte and his team, this new outlet of La Cage – Brasserie sportive both demonstrates the dynamism of our brand and confirms the success of our strategic repositioning.” 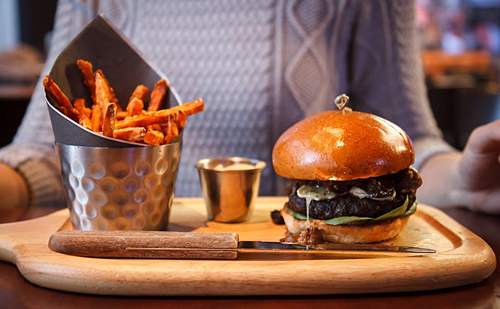 A burger and fries

The sought-after 605 sq m (6500 sq ft) space not only showcases the new La Cage to all of Montreal, it also promises to become a focal point for attracting tourists, workers and festival-goers alike. Patrons are greeted by La Cage’s trademark attention to breathtaking décor; inspired by modern breweries, walls are decorated with kegs and microbrewery barrels, while a giant video screen remains tuned to the day’s sporting events. The venue also plans to offer weeknight performances in keeping with the neighbourhood’s distinctive mission.

The opening couldn’t be timelier according to Jean Ruest, Marketing Director at Complexe Desjardins: “On the eve of Montreal’s 375th anniversary festivities, with Desjardins acting as a major sponsor, Complexe Desjardins couldn’t be prouder to expand its food offering by welcoming the new La Cage – Brasserie sportive concept. It’s a wonderful gift since the building itself will be celebrating its 40th anniversary! Also worth noting, the arrival of such a well-established chain will provide key support to the major redesign program of our St. Catherine Street commercial facade aimed at treating food enthusiasts to a wider restaurant offering in the comfort of heated urban lodges.”

There are now 46 La Cage locations in all in Quebec. They are strategically located in places like the Bell Centre, Pointe Claire, St. Laurent, LaSalle and Old Montreal. Groupe Sportscene also owns P.F. Chang`s in Canada, with locations near the old Blue Bonnets Raceway near Decarie and at Carrefour Laval.

Louis-François Marcotte is a noted celebrity chef, seen often on French language television. He signed on as a vice-president for La Cage more than two years ago. He is the de facto executive chef and from what I experienced during my dining visit I was very impressed with the diversified menu. After our superb server Eve gave us some menus to look at, General Manager Frédéric Deblois came over to the table and recommended we try the soup of the day. “It is different every day,” he said. “We let our cooks get creative.” 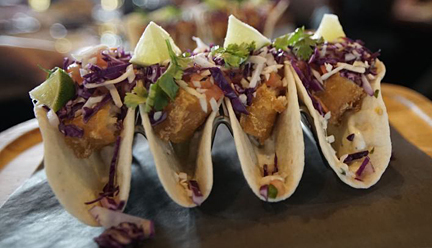 On this day they had a cream of onion soup available. It was served piping hot, with a crunchy piece of Melba toast. I thought it was absolutely delicious.

Claire, naturally very familiar with the wide array of choices, wanted me to experience a bit of a tasting.

We started off with some fish tacos, containing some vegetables and crispy pieces of cod. I will order these again! The onion rings were out of this world, made with fresh homemade breading. Now only a few La Cage locations offer tartar – Complexe Desjardins being one of them. We shared the salmon and beef options, with some garlic melba toast to absorb the spread. Both were delicious.

La Cage is proud of its offering of burgers. Last year it had a contest, asking customers to dethrone its popular Blitz Burger with their suggestions for a new one version. There were 8,834 entries and Blainville’s Mathieu Guidon’s Grand Slam was  chosen as the winner – a brioche bun, 100 percent Canadian beef patty, grilled jalapeños, pickles, red onion, romaine lettuce and blue cheese. Guindon now receives a percentage of total sales.  Naturally, we shared the Grand Slam and even by cutting it in half this was one filling burger. 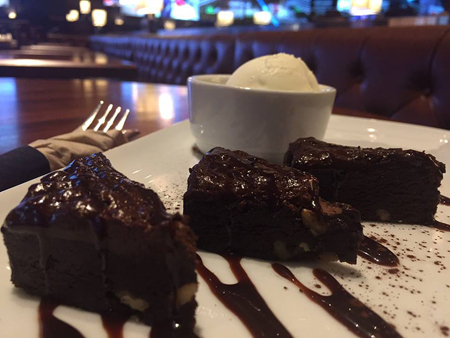 For dessert, I had some of their beyond fabulous triple chocolate chip cookies.

La Cage has a large selection of beers from its micro-brewery. Other appetizers which caught my eye included the franks in a crispy crust, potato skins topped with melted cheese, classic nachos, house chicken filets, the smoked meat sandwich, spaghetti, the chicken and ribs and steak, aged here for a minimum of 30 days to ensure tenderness.

Yes, there is also kids menu.

La Cage is particularly popular on evenings when there is a game, notably the Canadiens. In fact the atmosphere can get down-right thunderous when the Habs score a goal.