The royal wedding isn’t the only thing from across the pond creating buzz this summer… Brit(ish) is back for another year at Just For Laughs! Join host Nish Kumar, with Ed Gamble, Sara Pascoe, Joel Dommett, Lauren Pattison, and Paul Chowdhry. 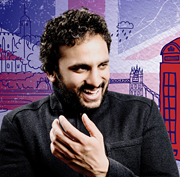 Nish has achieved huge success on the stand-up circuit with five rave reviewed stand-up shows at the Edinburgh Fringe Festival, two of which have been nominated for the prestigious Comedy Award for Best Show in both 2015 & 2016. On screen you can see Nish on the likes of Q.I., Mock The Week, and Live At The Apollo. Most recently Nish starred alongside fellow comic Joel Dommett in a 6-part travelogue for Comedy Central, Joel and Nish vs The World and hosted his own satirical, spoof, news series, The Mash Report, for BBC Two, which will return late 2018.

Ed Gamble is a stand-up comedian, writer, and actor well known as a regular on Mock the Week (BBC2) and for playing the lead role of Georgie Carlton in BBC America’s Almost Royal, a ‘cult US hit’ (The Independent). Following its success in the US, the show was broad cast on E4 and returned for a second season.

Ed has co-written and appeared in four seasons of Greg Davies’ Man Down, along with appearing on numerous shows including The Russell Howard Hour, The Apprentice: You’re Fired, Russell Howard’s Stand Up Central as a headline stand up, Drunk History, Roast Battle, Insert Name Here, Nick Helm’s Comfort Eating, CelebAbility, Dave’s One Night Stand, Virtually Famous, and Sweat the Small Stuff. Ed is also one of a handful of British comedians who have performed stand-up on the US TV show Conan. He has written for Never Mind The Buzzcocks and Ask Rhod Gilbert. Ed has appeared on Russell Howard’s Good News as both a solo stand up and alongside Ray Peacock as part of the double-act Peacock & Gamble. Ed and Ray remain the only act to have made a return appearance on the show.

On stage, Ed has just completed his UK leg of his latest show Mammoth, which sold out the entire run at the Edinburgh Fringe Festival in 2017 including extra shows added every weekend. Mammoth was his largest nationwide tour to date, including three nights at London’s Leicester Square Theatre. Ed previously won a Chortle Award in 2014 for Best Compere and has provided national tour support for Greg Davies’ tours in 2017, 2013, and 2012 as well as tour support for Russell Kane and Chris Addison. 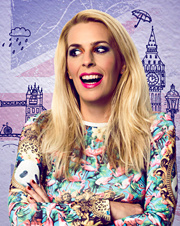 Over the last year alone, Sara has starred on Let’s Sing and Dance for Comic Relief (making it to the Final); adapted Pride and Prejudice for the Nottingham Playhouse/York Theatre Royal; filmed a solo stand up special for TV: Sara Pascoe Live from the BBC; hosted an episode of Live at the Apollo, and appeared as a weekly guest on Frankie Boyle’s New World Order. Sara has also been seen on television shows ranging from Have I Got News For You, QI, Travel Man and filmed and co-stared in the most recent WIA series. Following the enormous success of her debut book, Animal, Sara is presently writing her second book, Sex Power Money. Sara’s BBC Radio 4 series, The Modern Monkey aired to great acclaim and she is presently developing an authored special for the BBC.

Sara also sold out her entire run at the Edinburgh Festival (before the Festival even started) with her critically feted show, LadsLadsLads and followed this with a sold out week at the Wyndhams Theatre in London’s West End.

Joel burst onto the comedy scene in 2007 and quickly established himself as one of the most exciting comedians on the circuit. He has become a regular face on TV, from being a finalist in 2017’s I’m a Celebrity, Get Me Out of Here!, Comedy Central’s Joel and Nish vs The World, and a panelist on Sky 1’s Bring the Noise alongside Nicole Scherzinger, to presenting Live In Chelsea, the live E4 after-show to hit series Made In Chelsea.

Joel boasts a constantly increasing array of TV credits, he has also been a team captain on ITV2’s Reality Bites, featured on Drunk History and Channel 4’s Comedy Gala. Joel also co-starred in the hugely successful Impractical Jokers, and has numerous acting credits to his name, including a starring role in his first feature film White Island, E4’s Skins, and BBC Two’s Popatron. This year sees the new series of Joel and Nish VS the World air on Comedy Central in the fall. The first season is currently available to watch on Netflix.

Last year Lauren sold out her debut run at the Edinburgh Fringe Festival with her critically acclaimed show Lady Muck. This 5 star show was so popular three extra shows were added and subsequently sold out. Not only was Lady Muck the best reviewed show at The Pleasance this year, Lauren also won a Herald Angel Award and was nominated for Best Newcomer 2017 at the Edinburgh Comedy Awards. Needless to say, Lauren had an incredible debut year! She also successfully took the show to Soho Theatre where she also sold out the run.

Since the fringe last year Lauren has performed at Adelaide, Perth, Melbourne, and New Zealand International Comedy Festivals. She toured India for two weeks, playing in Bangalore, Goa, and Mumbai.

She will appear in 2 episodes of Live from the Comedy Store for Comedy Central this summer.

She was runner up at the Funny Women Awards 2014, was the only female comedian to reach the final of the Chortle Student Comedy Awards 2015 and in 2016 reached the final of the BBC New Comedy Awards. She has supported Katherine Ryan on her last two tours and opened for Stewart Francis and Dane Baptiste. She also played Latitude and Leeds festivals for the last two years. A regular on the national stand up circuit, this baby faced comic is one to watch out for. 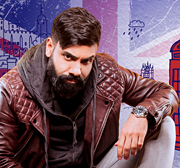 Paul Chowdhry is a critically-acclaimed stand-up comedian, actor, and writer. He has appeared on Ents24’s list of the UK’s top 10 most popular comedy acts.

Paul embarked on his third national tour Live innit in 2017, continuing on into 2018. It has already been spectacularly received, selling out two Hammersmith Apollos in less than a week, with more dates being added due to immense audience demand.

On television, Paul hosted the final series of Channel 4’s Stand Up for the Week, and has performed two headline slots on Live at the Apollo, as well as making four consecutive appearances on Channel 4’s annual Comedy Gala. He brought his uniquely hilarious interpretation to tasks as a competitor on season three of Taskmaster, and has made regular appearances on 8 out of 10 cats, Very British Problems, and ITV’s Celebrity Squares.

His first sell-out national tour, What’s Happening White People, (2012) was spectacularly received, firmly cementing his place within the British comedy mainstream. After securing a DVD deal with Universal Pictures, the show was recorded at a sold-out Hammersmith Apollo, and went on to reach number five in the charts. It was subsequently aired on Channel 4 three times. His second tour, PC’s World (2015), built on this success, and was extended three times due to enormous audience demand. It finally closed after a run of 100 sold-out shows, having sold approximately 100,000 tickets nationwide.

The 36th edition of the Just For Laughs Festival promises to be the most star-studded lineup ever with TV and cinema’s biggest comedy names, top touring comedians, cult-favourites and up-and-comers all converging on Montreal this summer. Galas, street performers, theatrical productions and stand-up shows in indoor venues and in the streets. Guaranteed to keep audiences in stitches.