P.F. Chang’s locales on Décarie and in Laval offer an experience like no other

Long before Montreal got its first P.F. Chang’s restaurant, I was a huge fan of the global chain. I would always seek out a location when travelling in the United States, be it North Miami, Chicago or Albany.

When I first got word that P.F. Chang’s was indeed setting up shop here on Rue des Jockeys next to the former Blue Bonnets Raceway on Décarie and at Carrefour Laval, I was elated. My family and I have been regular visitors since the April 2013 debut on Décarie, followed up two months later in Laval. A consortium headed by Michael Aronovici brought P.F. Chang’s to Canada. Last summer his group sold their interests to Groupe Sportscene, the owners of the Cage Aux Sports chain (now known as La Cage Brasserie Sportive).

There are now P.F. Chang’s locations in 22 countries. Founder Philip Chiang (he spells his name differently) was in Montreal in February, at which time he told me that the brand will soon make its debut in the United Kingdom.

While the Décarie locale is closer to home, my family I recently paid a visit to the Carrefour Laval spot and enjoyed an amazing dinner. The thing I must say about P.F. Chang’s is that going there is far more than just a meal…it is an experience! Ordering from the menu and deciding what to share around the table is a great deal of fun. Most of the staff at both locations have been there for the three years since things kicked off, so they are not only intimately familiar with the menu – but the regular clientele as well. When Groupe Sportscene made the purchase, they retained Emile Haykal as operating partner at Decarie. Craig Macdonald, who was appointed chief of operations for P.F. Chang’s Canada last summer, also oversees the Laval locale.

Macdonald had managed some Cage restaurants in the past, notably the busy Bell Centre location. In order to fully immerse himself in the P.F. Chang’s brand he spent six weeks at one of their restaurants in Boca Raton, Florida. 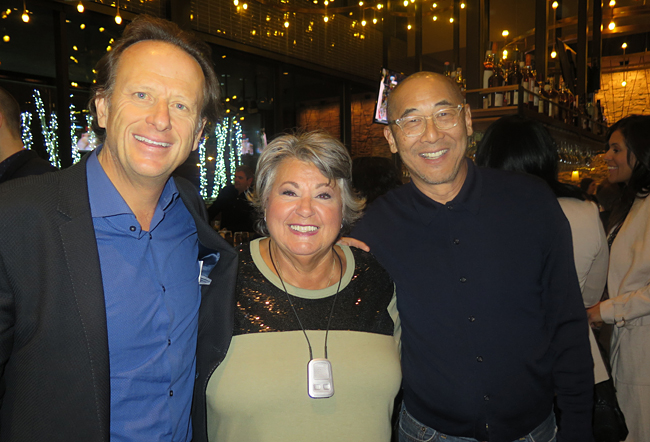 The first thing Sportscene CEO Jean Bédard did when his company purchased the Canadian rights was to drop the name “China Bistro” from the end of the restaurant name and refer to the place strictly as  P.F. Chang’s. Local officials travelled to the restaurant chain’s US headquarters in Arizona in order to be schooled on how to implement a revamped new menu. While the staple favorites remain, such as chicken lettuce wraps, Mongolian beef, crispy honey chicken and shrimp, shrimp lo mein, crab wonton and more, the newest draw are the sushi rolls: lobster avocado, spicy tuna, California, kaleidoscope, spicy dragon, dynamite scallop and warrior.

We are crazy about the lobster and dynamite scallop rolls. And there is no better way to cap the night off than by sharing the Great Wall of Chocolate cake at the table or the dessert wontons. “The sushi has been really popular,” says Macdonald. “They are made to order and take four to five minutes per roll to produce.”

Each dish on the P.F. Chang’s menu is prepared to order using the freshest and highest quality ingredients. The environment at each location combines influences of Chinese and American cultures. A panoramic, hand-painted mural depicting 12th century China, is visible from the main dining room and commands attention as the restaurant’s centerpiece, while several terra-cotta warriors stand guard. The majestic 11 foot tall horses grace the entrance to many of the restaurants, including Montreal and Laval. This horse symbolizes the original Forbidden City in China, which was built for China’s first emperor Qin Shi Huangdi.

We started off our most recent meal with some won ton soup, containing pork wontons, mushrooms, fresh spinach, water chestnuts, chicken and shrimp in a savory chicken broth. Then it was time for P.F. Chang’s signature chicken lettuce wraps: wok seared minced chicken, mushrooms, green onions and water chestnuts served over crispy rice sticks with cool, crisp lettuce cups. And of course we had the sushi as well.

As I mentioned, this is a place where sharing dishes makes the most sense.My recommendation is the Mongolian beef (tender flank steak wok-cooked then quickly tossed with scallions and garlic), crispy honey shrimp (lightly battered and tossed in a sweet and tangy honey sauce with green onions), crispy honey chicken (lightly battered and served in a sweet sauce over a bed of crispy rice sticks), double pan-fried noodles (crisp egg noodles stir-fried with mushrooms, bok choy, carrots, celery and onions and comes with a choice of beef, pork, chicken, shrimp or vegetable) and a bowl of steamed rice.

We had just enough room to share some desserts.

The Décarie location has a separate upstairs and is available for private parties. Laval’s is smaller and more intimate. It is in the back of the shopping mall, facing Highway 440, with a storefront entrance. “Business in Laval is up 10 percent over last year,” reports Macdonald.

Will P.F. Chang’s expand? Officials there are reportedly scouting for potential locations on the South Shore and in Quebec City.