Melissa Etheridge has enjoyed a highly successful career as a rock ‘n’ roll musician, songwriter and performer since her breakout album in 1988. At 54, she has recently released The is M.E., and she hasn’t lost a step in her full throttle ability to write and record songs that are instant rock anthems. I Won’t Be Alone Tonight from her new recording has all the energy and sing-along big sound that Come To My Window had decades previously. “Hello Peter – this is Melissa Etheridge…” I had the pleasure of speaking with Melissa recently, and she told me how she’s approaching her Montreal solo show on September 27 at Place des Arts Theatre Maisonnueve.

“When I first started out, I played piano or guitar in Boston clubs while going to Berklee School of Music. I was able to work five or six nights a week, and make enough to put myself through school. When I moved to LA – it was harder to find paying gigs because most people played for free – but I finally found a gig that paid and I worked five nights a week. Not only did it put money into my pocket, those solo jobs gave me the ability to be comfortable by myself on stage, and that’s what I’m doing again with this solo tour.” 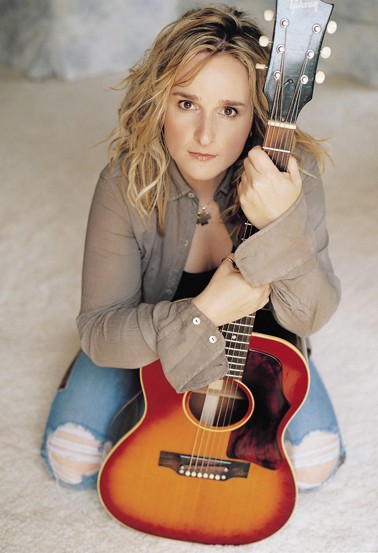 ‘“I was a rock ‘n’ roll musician when there were very few female guitarists. There were female popular music performers, but only a handful like me. Because I played an acoustic, people referred to me as a folk singer – which I was definitely not! But that all changed when I started touring in support of my albums. I’ve always been able to have a really great band, and we absolutely fill the halls with sound.”

“For my show in Montreal, I’ll have ten or twelve guitars on stage with me. I also use a drum machine, and build the sound by recording over myself. It’s kind of like a behind the scenes look at how I record and develop the songs. It also gives me and the audience a chance to interact with each other more that I would in a straight-out rock ‘n’ roll show with the band. I’ve been doing this type of solo show for a while and the audiences like it.”

Known for her iconic voice, profound lyrics and riveting stage presence, Etheridge will share personal stories about her remarkable journey through life and the inspiration behind some of her most beloved songs.