Sammy is a favourite of English and French audiences, a phenomenon that is unique in the linguistically divided city of Montreal.

Sugar Sammy is enjoying a uniquely successful international career as a stand-up comedian who performs with equal facility in English, French, Punjabi and Hindi. In 2012 Sammy performed a record number of shows at the Olympia Theatre in Montreal, selling well over 35,000 tickets. He is returning for a series shows this February, March, April and May; and extra performances are already being added. In 2013 he was nominated in three categories for the prestigious Olivier Awards that celebrate French-language humour and won two awards. Sugar Sammy, a multi-lingual Canadian of Indian descent won Olivier awards for Show of the Year (En français SVP!) and Olivier de l’année – the best comedian of the year. 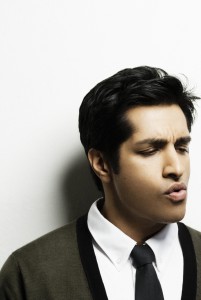 His shows throughout the Province of Quebec sell out – even though he is irreverent in his criticism of the separatist movement, “the Charter”, and the Parti Quebecois. “I don’t hold back, and you can see there’s a little bit of an edge in the room – but they’re laughing.” Continuing on the topic of the PQ proposed Bill 60 to impose a ‘Charter of Quebec Values’ Sammy notes; “If you look at me it won’t be a surprise that I’m not in favour. You know it’s gone bad when four former PQ leaders – including Jacques Parizeau, don’t approve of the bill.”

In 2013, Sammy did a series of shows in India, and received a hero’s welcome in sold-out halls. “It was fun to back to my parents roots. I thought that it would feel like I had come home myself – but I realized that my point of view of India was coming from a North American perspective.” Sammy pauses for a few moments before continuing; “It was in India that I realized that Montreal is my home.”

Sammy’s command of languages is so deep that he is co-starring in ten episodes of a French-language television series that he has also co-written. “It’s very different than writing comedy that I perform by myself. I’m not only writing the dialogue for other characters, I also have to be aware of where they are on the set while we’re shooting the scenes. It took me a couple of days to get used to get used to all the activity going on around me while I was supposed to be focusing on the person I was speaking to in the scene.”
“I grew up in the Cote des Neiges area, not too far from the Jewish General Hospital. We lived in a basement apartment. At one time my Dad had a carpet cleaning business, and he did a lot of work in Hampstead. One of his dreams was that someday we’d be able to live in Hampstead.”

“My Dad opened the first of what would eventually become several dépanneurs (There – see how we use each other’s language? Say dépanneur in Toronto and they don’t have a clue what you’re talking about!) He eventually settled on just two locations. Dad made sure that we kids would come to the store after school to help out. We learned how to work the cash register, fill in orders and learn the business.”

This early experience had a positive effect on Sammy’s own business acumen. “My Dad was always looking for ways to improve his business. He welcomed his customers by name, and he’d often share an inside joke with them. He was always personable with them – and it worked!”

“I apply the same discipline to my “business” I recognize that people have all kinds of ways to spend their money, and I want to give them the best value for the price of their ticket when they come to see me.”

Sammy attended to École Secondaire Lavoie before continuing his studies at Marianopolis and McGill University, where he followed a program of Cultural Studies, learning about film, television and media. Not the career in Medicine that his parents had hoped for. Sammy started a business as a party promoter, which is how he paid for his tuition at McGill. “I enjoyed it and it was fun – but it became a bit of a handicap later when I was trying to break out as a comedian.”

“I grew up like any other Canadian kid, playing hockey with my friends and rooting for The Canadiens. I still play 2 – 3 times a week when I’m in town – it keeps me fit.”

Sammy started performing comedy while attending Marianopolis College. “It was my ‘gym’ where I trained just the way an athlete trains.” Continuing, he notes; “You gotta have great jokes, come to work ready and be prepared. I always tested my material. My brother and sister were great sounding boards.” Even with an internationally successful career, Sammy still writes his own material and tests it out in small clubs. “I often go the Comedy Works on Open Mike Night to try out new material. They’re very good about letting me go on last, without any fanfare.”

The secret is to make it look easy, so that people say to themselves; ‘Wow, he’s just up there havin’ fun.’ Little do they know that there’s a whole lot of work and preparation that goes into making it look easy.” 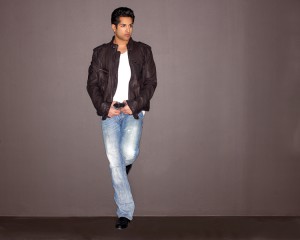 Sammy got a chance to perform at Just For laughs in 2004. “They knew me as a party promoter – and in fact I had worked for them in that capacity. So it was hard for them to take me seriously as a comedian. However, one of their talent spotters Kelly McKeigan urged them to give me a try.” In response to my question Just For Laughs being his springboard to stardom – Sammy replies; “It certainly helped me to get more and better gigs for sure – but it was the internet that has enabled me to have this international career.”

Sugar Sammy performed on Comedy Now, a CTV Special in 2006. His performance was put up on You Tube – Sammy’s career literally took off. “Shortly after that, I received a call from a promoter in Dubai who had seen my YouTube performance. Since then, I’ve performed on every continent except South America.”

Sammy performs in English, French, Indian and Punjabi – an amazing feat when you consider the importance of timing in comedy. He somewhat modestly adds that “Indian and Punjabi are closely related languages – sort of like Spanish and Portuguese. So it’s not that big a deal…”

Here’s a look at a typical 2 week period in the life of Sugar Sammy. He began with a trip to Paris for several performances. “I got there several days early to make sure I’m not jet-lagged for the audience. I did a couple of shows, and then flew to Malaysia for shows in Kuala Lumpur. I met the promoter, did 2 to 3 days of press interviews and radio shows, and then performed on the Saturday and Sunday. Then flew to Dubai where I was booked for another show and a private party. After that I came back here for several press interviews to promote the new show, including my conversation here with you. Then I’m going to Haiti to do some benefit performances.”

Remembering the business lessons learned from his father, Sammy adds; “I don’t travel with an entourage – I keep it simple. I just go – meet the promoter, work to promote the shows, perform and then go to the airport and it’s on to the next gig.”

“I push the envelope a little, poking fun at different ethnic groups or in the case of Quebec – language groups. You have to do it with finesse and from a place a love. You’ll be accepted if the audience understands that you’re not being mean-spirited. Don Rickles got away with his jokes at other people’s expense because they knew that he did it with love. They could see from his smile and the twinkle in his eye that he wasn’t being mean-spirited.”

“We can build bridges if we can laugh together about each others’ habits and stereotypes. It’s quite different than laughing at the other guys.”
Sammy smiles a little sheepishly when I ask him about his life away from the spotlight. “My downtime is a little nerdy. I enjoy watching documentary films, and I’m also an avid conspiracy theorist. And of course – there’s my twice a week hockey games when I’m in town.”

Continuing: “I travel so much that I don’t even have an apartment here in Montreal. Until recently I lived with my parents – in the house in Hampstead that my Dad did eventually buy for our family.”

Sammy is aware that his art is also his business. “You have to be conscious of both. I work hard to make my shows entertaining and to keep my material fresh. It’s a constantly evolving process. At the same time – I’m aware that this is also my business; that I’ve built a business around my ability make people laugh.”
I always try to do my best. I didn’t want to disappoint my parents. They’ve been tremendously supportive of me – even if I’m not a doctor!”

Sugar Sammy has already broken sales records for his upcoming shows at The Olympia, and additional dates have already been added to meet the demand for tickets.
For show dates please visit evenko: www.evenko.ca
Ticket purchase: www.admission.com or telephone: 1-855-790-1245