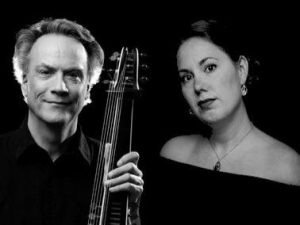 Love songs through the ages, from 17th Century Italy to 20th Century France. Performed in the Chapelle Notre-Dame-de-Bon-Secours, on Saint-Paul East.

The young coloratura soprano Myriam Leblanc is the recipient of several prizes: first prize and Audience Choice Award at the Trois-Rivières Symphony Orchestra Competition, Young Lyric Ambassador 2014 (Québec Bavaria prize), winner of an Audience Choice Award in the Center Stage competition of the Canadian Opera Company, third prize in the Auditions Nouvelles Découvertes competition of the Ottawa Choral Society, winner of the excellence grant awarded annually by the Atelier lyrique de l’Opéra de Montréal and the first prize at the Mathieu Duguay Early Music Competition at the Lamèque International Baroque Music Festival in 2017. Myriam Leblanc is a versatile artist who works as much in the classical world as in the bel canto, as in the baroque. She is recognized for her timbre of great purity, for her supple and warm voice and her great mastery in both technical and musical expressiveness.

“It’s like a brandy distillate, absolutely transparent … Her name is Myriam Leblanc and in my opinion she has been one of the most beautiful voices, perhaps the most beautiful, to come out of the Quebec breeding ground in the past 10 years …” – Christophe Huss, Samedi et rien d’autre, December 2020

Her future projects include a Mozart Requiem with Les Violons du Roy, Handel’s Messiah with Le Festival Classica (tour), a recital of Medtner’s music with Charles-Richard Hamelin and several concerts with groups such as Early Music Vancouver, La Nef, the Mirabilia Ensemble and the Symphonia Nova Scotia.

Considered “a supremely refined, elegant and cerebral musician” (Ottawa Citizen), Sylvain Bergeron is a master of the lute and family of plucked instruments, including the theorbo, archiluth and baroque guitar. He is in great demand on the North American music scene as a soloist and continuist. He is one of the pioneers of early music in Canada and has helped establish the lute as a viable instrument at the highest level of professionalism. His work has confirmed the importance of plucked instruments and helped validate their place in Baroque ensembles and orchestras in Canada

Sylvain Bergeron has participated in more than 70 recordings, many of which have won prizes and awards. His most recent solo album, Gioseppe Antonio Doni’s Lute Book, published by ATMA Classique in 2015, was widely praised for his “strong lute technique combined with outstanding musical intelligence and impeccable phrasing” (The WholeNote ), while the magazine Goldberg described his game as “imbued with both great rhythmic vitality, delicacy and nuance”.

Co-founder and co-artistic director of La Nef, Mr. Bergeron has directed several award- winning productions of this Montreal ensemble since 1991. He has taught lute at McGill University and the Université de Montréal since 1992.