During this concert-lecture, guitarist Pascal Valois will take the audience on a journey through three important periods of the history of one of the most-played string instruments in the world. From the sumptuous and luxuriant Parisian repertoire of the end of the 18th century, to the Viennese repertoire of the 1840s—the veritable swansong of the Romantic guitar—by way of the Italian sonata of the 1820s and its bel canto veneer, through his use of period instruments Pascal Valois will contextualize landmark works illustrating the evolution of the guitar. 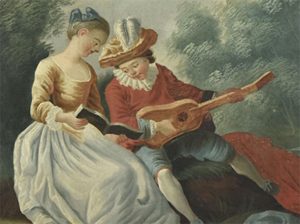 Pascal Valois is dedicated to reviving enthusiasm for the guitar scene during the Romantic era. He performs music from the nineteenth-century repertoire by using various period instruments, ornamentation, stylistic practices of the period, as well as improvisation, which was customary in that era.

After graduating with honours at the Conservatoire de musique de Montréal under Jean Vallières, and receiving the award Pierre J. Jeanniot during his studies at Université du Québec à Montréal with Alvaro Pierri, Valois studied romantic guitar with Hopkinson Smith at the Schola Cantorum Basiliensis and with David Starobin in New York. He has also received a doctorate in Performance Practice from Université Laval. Recently, he has played in Basel, Paris, Riga, San Francisco, New York, Ottawa, and Toronto. He has been a soloist with many ensembles, among them Rigas’s Ensemble Samsara and Montreal’s Les Idées Heureuses. He has also given master-classes in many institutions, including the Manhattan School of music, the San Francisco Conservatory, and the Conservatoire de musique de Montréal.

Pascal Valois has received the most renowned bursaries in Canada for guitar performance (Canada Council for the Arts) as well as Musicology (FQRSC and SSHRC). He has also been awarded scholarships from the Desjardins Foundation, the Wilfrid-Pelletier Foundation, the Laval University Foundation, and the Université du Québec à Montréal Foundation. Pascal Valois is a professor of classical guitar at the Alma College (Quebec).

To purchase your Live or virtual concert tickets visit: www.mbam.qc.ca/en/bourgie-hall/