Louis Leprohon’s book is a collection of 15 large unique and outstanding paintings by Marcel Dargis, one of Canada’s most important naïve artists. The collection includes thirteen paintings, 60” x 48” and two, 60” x 40”. The book is available in French or English and features 15 full-page colour plates, one for each painting, and an additional 86 colour visuals.

Over three years in the making, Marcel Dargis, at the tender age of 92, completed the last painting in January 2021. Each painting conveys an accurate recollection and interpretation of life in Quebec years ago. Once again, he has made a significant contribution to the patrimoine culturel of Quebec.

The following museums have agreed to host an exhibition of Dargis’ new collection:

The book will serve as their catalogue for the exhibitions. 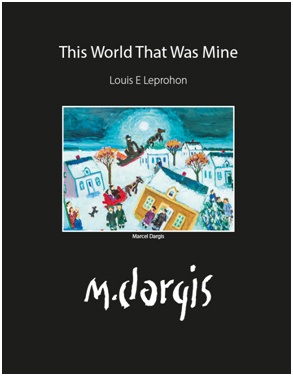 The stories in this collection encompass a variety of subject matters, all about a Quebec d’autrefois.

Three of the paintings render homage to Quebecois artists who made major contributions in literature, film and traditional music in the 20th century, respectively Félix-Antoine Savard, Pierre Perrault and Jacques Labrecque. Another canvas is in memory of those 5,424 Irish people, fleeing the Great Famine, who landed at Grosse-Île in 1847 and died either of typhus or dysentery and are buried there.

‘Le Québec de nos jours’ is Dargis’ trilogy, his personal statement on his beloved homeland. It starts from the first days of the colonisers and their founding of a distinct culture, to the Quebec in which he grew up, and concludes with his observations of Quebec today. The trilogy is about reflection and transformation.

Louis Leprohon lives in Saint-Lazare, Quebec. After graduating from Loyola College with a Bachelor of Arts, he worked in sales, marketing and advertising in Canada and England. He founded L.E.L. Marketing in 1979, an integrated communications agency with offices in Montreal and Toronto, working with multinational corporations in Canada and the United States. Apart from living for a few years in Vancouver, Toronto and England, he has resided in Quebec all his life.

Business man, history buff and lifelong enthusiast of the arts and culture, he describes the exceptional talent and work of Marcel Dargis. Having known him for over 25 years, he brings to the forefront the artist’s passions and emotions in preserving a unique part of Quebec’s cultural heritage. This is his second book.