The concert will begin at 8pm EDT. The livestream will be available to watch for 48 hours so you can experience it any time that is more convenient for your schedule. Get your ticket at www.avrillavigne.com

Avril’s latest album Head Above Water was inspired by her fight with Lyme disease.

Over the course of Avril’s sixth full-length album and debut for BMG, she holds nothing back. She details each trial and tribulation from a perspective of triumph and emerges stronger than ever before. You’re hearing the songstress as she was always meant to sound. “This is me and my fight,” she affirms. “This album tells my story.”

That story seems unbelievable from afar. One difficult night in particular while she fights for her life, a lyrical idea rushes through her body. Those words comprise “Head Above Water.”

“I’m in a battle,” she sighs. “One night, I thought I was dying, and I had accepted that I was going to die. My mom laid with me in bed and held me. I felt like I was drowning. Under my breath, I prayed ‘God, please help to keep my head above the water.’ In that moment, the song writing of this album began. It was like I tapped into something. It was a very spiritual experience. Lyrics flooded through me from that point on.” 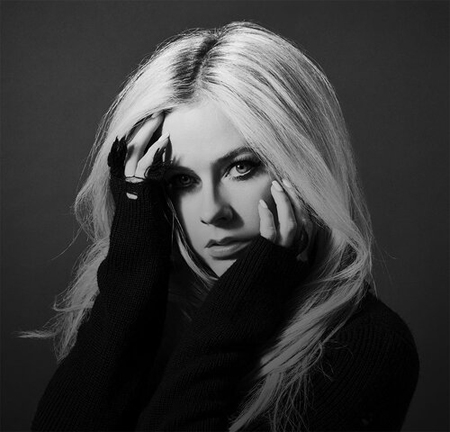 A year before, Avril’s fight had just begun. Touring the world in support of her gold-certified Top 5-charting self-titled fifth album, the artist’s health rapidly deteriorated. She can recall “barely making it” through 2014, while traveling from country to country and seeing numerous doctors on the road. No one could figure out what was wrong until her December, 2014 Lyme Disease diagnosis. She graced the cover of People Magazine to tell her story in early 2015. In the midst of her battle, she sat behind a piano and sang past the pain, architecting the early framework for her new album. 2017 represented a turning point as she slowly, but surely recovered strength and started recording again, starting with the first single “Head Above Water.”

“I fought Lyme Disease on antibiotics and herbs for two years. I tried to have a life, but was in bed the majority of the time, and it was very up and down with good days and bad days. “When you’re in bed for the better part of two years, you lose muscle mass,” explains Avril “and your entire body gets weak. I’ve had to work to get my endurance up. ‘Head Above Water’ was the first song that I sang. I was fresh off not singing for two years. I thought my voice would be weak, it ended up being stronger than ever. The break happened to actually be good for my vocal cords.”

In this headspace, she hit the studio with a bevy of collaborators, including Stephan Moccio, Chris Baseford, Johan Carlsson, Lauren Christy of The Matrix, Ryan Cabrera, Travis Clark, Bonnie McKee, JR Rotem, Mitch Allan and more.

“I really took my time to dig deep. Lyrically I pushed myself to be the best I possibly could and pulled from my experiences. Because I had so much quiet downtime, I was able to stay in the zone and get in touch with myself. Titles came from phrases I was saying that rang true to my experiences. Subjects were things that weighed heavy on my mind and heart. I sat at the piano and wrote my life.”

Over the course of nearly two decades, her global sales have eclipsed 40 million albums and 50 million singles with five albums bowing in the Top 5 of the Billboard Top 200 and two at #1. Among countless accolades, she garnered eight GRAMMY® Award nominations and took home eight Juno Awards. She stands out as “one of the Soundscan-era’s top-selling artists releasing albums in the U.S.” and “third best-selling Canadian female artist of all-time.” Billboard placed her in the Top 10 of its “Best of the 2000s” chart. Lavigne also set the Guinness World Record as “the youngest female solo artist to top the UK chart” and made history with “Girlfriend”—which became the “first music video to reach 100 million views on YouTube”.

“Your support of The Avril Lavigne Foundation allows us to raise awareness and aid prevention of the Lyme epidemic and other diseases,” explains Avril. “We directly impact the lives of individuals and families affected by Lyme through treatment grants administered by our charitable partners; and we’ve recently created an alliance to accelerate scientific research. All proceeds raised through our initiatives enable us to expand the number of lives we’re able to transform.”

“I went through a lot to get here,” she leaves off. “The positive side is I didn’t stop living my life. Having music while I was healing and in recovery definitely pulled me out of my darkness. I had a goal to work towards and a purpose. I hope the album touches people. We all go through challenges in life. Some unfortunately are more serious than others. Having gone through the battle of my lifetime, I’m stronger than ever and looking forward to sharing my renewed voice and energy for my life with my fans through this new music.”

Don’t miss your only chance to see Avril perform in 2020!
www.avrillavigne.com