Many of you will remember the opening lines of Charles Dickens’ A Tale of Two Cities – “It was the best of times, it was the worst of times”. Although, at least for the moment, the worst of times aptly describes the situation in the United States, there are exceptions which prove what America can be at its best.

During the Second World War, to describe the tactics of deception being practiced by Britain and its allies, Winston Churchill famously stated, “In war-time, truth is so precious that she should always be attended by a bodyguard of lies”. Churchill would no doubt be horrified to find his elegant statement being used in the context of the coronavirus pandemic, so my use of it requires explanation.

When he finally awoke from his hallucinations, President Donald Trump described the battle against the coronavirus COVID-19 as a “war against an unseen enemy”. While I am sure he is completely ignorant of Churchill’s wisdom on the subject, Trump has certainly ensured that, even now, as he has finally realized how deadly the situation is, he has been “protecting” Americans from the dangerous truth of the pandemic with a tissue of lies, ranging from the ignorant, through the fatuous, to the deliberate.

The President has consistently maintained that the extent and danger of the COVID-19 pandemic was unknown until very recently. That, quite simply, is a lie, although he may have personally avoided learning the truth.

charged with preparing for another pandemic”

For many months, the daily intelligence briefings provided to the President and other senior officials made reference to the serious risk of a new and powerful virus, although it was not specifically identified. In 2019, the Trump Administration ran a pandemic exercise. The report stated, among other conclusions, that the “United States was unprepared and disorganized, especially with respect to the manufacture of Personal Protective Equipment (PPE)”. On January 8, 2020, the Washington Post reported on the “outbreak of an unidentified and possibly new viral disease in central China”.

Whatever ignorance may have persisted was probably camouflaged by the fact that, in 2018, Trump disbanded the National Security Council health unit charged with preparing for when, not if, another pandemic would hit the United States.

As lawyers might say, the President knew or ought to have known about the danger long before he either acknowledged it or acted on it. His public statements during the past two months convincingly demonstrate the notion of a bodyguard of lies.

On March 17th, 2020, the President stated, “This is a pandemic”. In a remarkable display of chutzpah, even for him, he further declared, “I felt it was a pandemic long before it was called a pandemic”. With reference to the following presidential declarations, readers may judge for themselves the relationship between Trump and the truth.

January 30           “We have very little problem in this country at this moment – five – and those people are all recuperating successfully.”

February 24        “The Coronavirus is very much under control in the USA. Stock Market starting to look very good to me.”

At one press conference, when asked how he rated his performance, he awarded himself a “perfect 10”. On Friday, March 13, with no hint of irony, Trump proudly declared, “I don’t take any responsibility at all”. Finally, on March 17, as I indicated above, la lumière fut.

Notwithstanding the fact that, since March 17, the President’s tone has become more serious, his press conferences are replete with false statements, exaggerations, attacks on others and outright falsehoods. The self-congratulation has continued, as in his statement that, “We’ve done a fantastic job from just about every standpoint” and his false declaration that, “We had a problem that about a month ago nobody even thought about it”.

Since March 17, there has also been a dramatic pivot in the right-wing media, especially among his sycophants at Fox News, the America Pravda. The propaganda has shifted from “it’s no big deal”, “it’s a hoax” or “it’s the Democrats weaponizing the virus to hurt Trump” to fulsome, almost poetic, encomiums about the President’s extraordinary leadership. Every day, during the President’s press briefing, each of the participants, with the obvious reluctance of Dr. Anthony Fauci, and no doubt at Trump’s urging, panders to him with effusive praise. The most pathetic sycophant is Vice-President Mike Pence. Even Trump’s critics acknowledge that his decision, fairly early on, to enforce a partial travel ban from China and Europe proved helpful. However, for Trump’s lackey-in-chief at Fox News, Sean Hannity, the travel ban “will go down as the single most consequential decision in history”.

Obviously, Donald Trump is not responsible for the COVID-19 pandemic. One must also acknowledge that even the greatest of presidents, with a “magic wand”, could not have defeated the “invisible enemy” overnight. However, only the most fanatical members of the Trumpian cult would deny that the dismal performance of the Administration has had a major and negative effect on the current situation.

The Worst of Times

Although nobody can express certainty, or even high probability, as to when the pandemic will be controlled in the United States, true leadership, which is being shown by the Governors of many states, is based on hoping for the best and planning for the worst. At the moment, a number of Governors, together with public health officials, are explaining that their healthcare systems may simply be overwhelmed in the weeks ahead. While New York State is currently the hardest hit, other states such as Louisiana, Michigan, Washington and California have healthcare systems under severe stress. All experts agree that, while the timing will vary from one location to another, each location will live through a curve of infections which will rise to an apex and then slowly decline.

In every healthcare system, the problems are similar. On a purely practical level, currently being experienced most acutely in New York City, testing is woefully inadequate, the hospitals do not have enough beds, do not have enough available Intensive Care Units, and do not have enough PPE, which includes gloves, masks, plastic shields, full-body gowns and, most critically, ventilators. The latter are essential, particularly in the case of elderly patients whose respiratory systems are challenged or who have other underlying health problems. Hospitals and public health officials also acknowledge that the pressures of the COVID-19 pandemic are putting almost unbearable strain on their “normal” functioning as hospitals.

Beyond the difficulties of an objective nature, relating to the number of beds and the amount of available equipment, the difficulties being faced by those who work in the healthcare system, namely, the doctors, nurses, technicians and support staff, grow exponentially by the day. Anyone who watches the news will have seen the exhaustion, physical and mental, on the faces and in the words of the healthcare professionals whom one sees on the screen.

Almost unbelievably, the President persists in claiming that everything will be fine and that he and his administration are doing a great job. The self-congratulation continues in the face of sustained criticism, not only from the Democrats, but from independent healthcare professionals across the country. One particular shortage illustrates the point. Ventilators, which are required to save lives, and which are in desperately short supply, not only in the United States, but around the world, are a very complicated piece of equipment. At a cost of about $50,000 each, comprising some 1,750 individual parts, in many cases obtained from several countries, they cannot be produced overnight, even by existing manufacturers. Nevertheless, Trump constantly attacks Governors Andrew Cuomo, Jay Inslee and Gretchen Whitmer (surely by coincidence, all Democrats) for complaining about the federal government’s inability to supply ventilators. Absurdly, since the pandemic is national, he has basically told the Governors to fend for themselves, thereby pitting one state against another. His statement, “The federal government is not a shipping clerk” demonstrates how little he really cares.

The Best of Times

In the face of this pandemic, in spite of the enormous difficulties faced by the healthcare system, notwithstanding the incalculable damage to the economic system and, perhaps most importantly, the pain, grief and suffering which all Americans are living with, the best of humanity also shines through.

One individual must be mentioned; Dr. Anthony Fauci, the Director of the National Institute of Allergy and Infectious Diseases, has been superb. Daily, calmly and with precision, he provides expert medical guidance, not only to the President and other officials, but also to the nation. He alone, and almost every day, has had the courage to correct the President’s frequent errors or exaggerations. 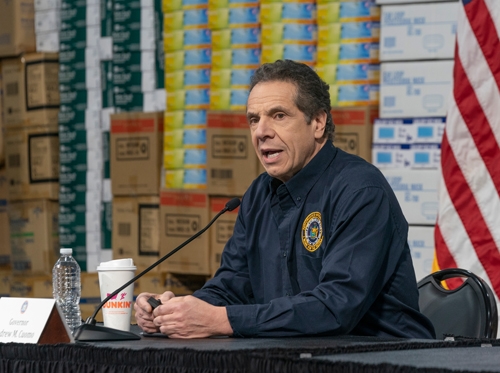 The efforts of all those working in the healthcare system can only be described as heroic. They must be close to the limits of human endurance, especially as they are working under conditions which in normal circumstances would be intolerable. Not only are they caring for patients who are both extremely ill and exceedingly contagious, but they are doing so without adequate protection. In relative terms, they are far more at risk than the rest of the population and deaths amongst these professionals are rising. In Italy, forty healthcare workers have died. In France, three doctors have already been lost. One hospital president in New York City said of her staff, “They just take their courage in their hands. They put on their garb and show up”. In at least some cases, that “garb” has consisted of wearing plastic garbage bags as gowns.

One surgeon in California said, “We are at war with no ammunition”. In New York, a doctor stated, “You feel radioactive”. A nurse, maintaining a sense of humour, declared, “If I could marinate myself in sanitizer, I would”.

has certainly become a significant and inspirational figure”

Beyond the healthcare system there are thousands of people, men and women, working in essential public services, including paramedics, policemen, firemen, public transit workers and many others, who just go about their business without complaint. Several small distilleries have innovated by using their 60 proof alcohol to make hand sanitizer. People are showing up at hospitals bringing protective masks which they have found in their toolboxes. Other small enterprises have shifted their production to making protective gear, such as masks, which they are delivering at cost.

Although I am not sure the word heroic applies, and he would certainly reject it, Governor Andrew Cuomo of New York State has certainly become a significant and inspirational figure, who has ridden the “tide in the affairs of men”. At another time, he might well have ridden the tide to the White House. His daily briefings, which are crisp, precise, factual and essentially unemotional, not only demonstrate a mastery of detail but an empathetic understanding that America is living both a health crisis and a social crisis, but are in dramatic contrast to the President’s ignorance, self-congratulation and bluster. Most particularly, Governor Cuomo has taken full responsibility for every action he has taken.

The perceptive columnist Maureen Dowd has said of Governor Cuomo that his is a “measured bullying” and that he has become “a sort of national shrink”. Liz Smith, the campaign manager for Pete Buttigieg, contrasted Trump and Cuomo as, “Trump is selfishly ruthless for his own personal gain while Cuomo is more benevolently ruthless.”

The times in America call ideally for a George Washington, an Abraham Lincoln or a Franklin Delano Roosevelt. Sadly, they must live through this crisis with Donald Trump, a man without a single redeeming quality and almost certainly the worst president in American history. However, in spite of Donald Trump, the United States will live through the crisis and, perhaps much changed and even chastened, should return to its pre-eminence amongst the world’s free nations. That is a result we should all wish for.

Peter Blaikie is a successful attorney, business executive, opinion leader and world traveller. He has been active in politics, serving as a past president of the Federal Conservative Party. (Then the Progressive Conservative Party)