The National Youth Orchestra of Canada (NYO Canada) and the European Union Youth Orchestra (EUYO) are joining forces for The Frenergy Tour, a landmark collaboration and celebration of music and friendship, featuring a combined total of 76 outstanding young musicians. The Montreal concert will be at the historic Notre-Dame Basillica on Thursday, November 14 at 7:30 pm. Acclaimed Viennese conductor Sascha Goetzel will lead the four-city tour, with music by Rossini, Ravel, Saint-Saëns, Stravinsky, and Wagner, as well as Canadian composer John Estacio’s Frenergy for orchestra, connoting both friendship and frenetic energy! Fast-rising violinist and NYO Canada alumnus Blake Pouliot is featured as guest soloist. This ground-breaking tour, including concerts in Toronto, Kingston, Montreal, and Ottawa, is made possible by the European Union Delegation to Canada. 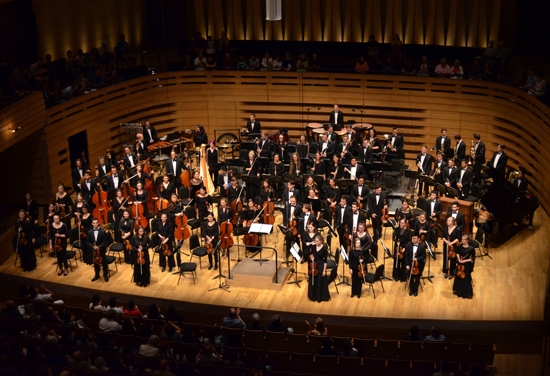 The National Youth Orchestra of Canada at Koerner Hall in Toronto

“The Frenergy Tour reflects the depth of EU-Canada’s friendship and our shared commitment to supporting youth and the arts community. It is wonderful to see young European and Canadian musicians come together, united by their shared love of music,” said European Union Ambassador Peteris Ustubs. “Intercultural exchanges, such as this concert tour, have the power to connect people and build bridges of mutual understanding and respect.”

Marshall Marcus, Secretary General of The European Union Youth Orchestra comments: “As a cultural ambassador for the European Union of more than 40 years, it is a great pleasure and a tremendous opportunity for the EUYO to be taking part in this EU-funded tour together with NYO Canada. Audiences in Canada will not only witness the highest possible calibre of performance, they will also experience one of the world’s most potent and important forces: the coming together of young people of different nations to work in harmony and dedication.” 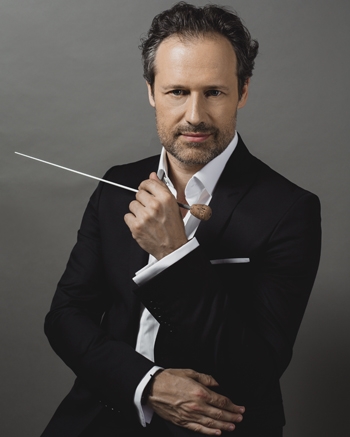 Conductor Sascha Goetzel is acclaimed by The Guardian as “the consummate
showman…
Photo: Ozge Balkan

Barbara Smith, President and CEO of the National Youth Orchestra Canada affirms: “As we confront a future filled with uncertainty and fragmentation, music offers bridges to understanding, co-operation, beauty, and transformation. Each partner organization – EU, EUYO, and NYO – has already demonstrated commitment to the highest standards and ideals. Now, our vision is to develop a truly global network of young creators embracing their role as change agents, leveraging their capacity as artists to touch hearts and minds.”

The close collaboration between the two orchestras was already instigated this past summer, as two violinists from NYO Canada – Teresa Wang and Cassandra Leshchyshyn – spent the summer on tour with the EUYO; and three European musicians – violinist Janela Nini from Austria, violinist Patricia Francia and cellist Gema Pérez Oliver-Cello of Spain— joined NYO Canada for its training institute, and then on tour in five Canadian cities and in Spain.

Conductor Sascha Goetzel is acclaimed by The Guardian as “the consummate showman… with a fine sense of orchestral colors.” Artistic Director of the Borusan Istanbul Philharmonic Orchestra since 2009, Goetzel leads the vibrant program in all four cities. Each concert opens with John Estacio’s vigorous Frenergy for orchestra, which has been performed widely since its 1998 premiere by the Edmonton Symphony Orchestra. The JUNO-nominated violinist and NYO Canada alumnus (2012-13) Blake Pouliot, recent winner of the Canada Council for the Arts’ Virginia Parker Prize, is the soloist for Saint-Saëns’ beloved Introduction and Rondo Capriccioso in A minor, Op. 28 and in Ravel’s fiery Tzigane for Violin and Orchestra. The exhilarating programme also includes Wagner’s Overture to Tannhäuser (Paris Version), Rossini’s Overture to William Tell, and the Suite from The Firebird (1945 revision) by Stravinsky.

The Montreal concert will be on Thursday, November 14, 7:30 pm at Notre-Dame Basilica. For tickets, please contact: https://nyoc.org/tickets/frenergy/