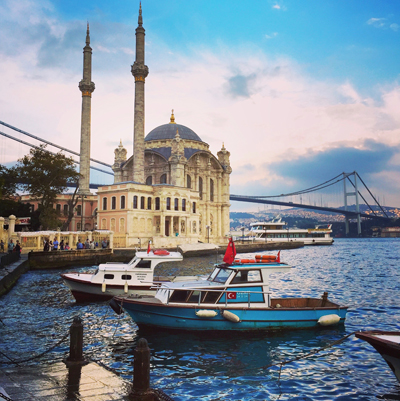 With my feet dangling in the silky waters of an infinity pool, palm trees rustling overhead and the sun warming the terrace of our villa, the fast-approaching chill of Canadian autumn seems very far away.

Although this magical hideaway would be at home in the Maldives or French Polynesia, it’s actually in Bodrum on Turkey’s southwest coast overlooking the Aegean Sea. With direct flights to Turkey from Montreal via Turkish Airlines, not only is it much easier to get to than its luxury counterparts but today’s favourable exchange rates makes it especially appealing to luxury seekers.

So if you’re looking for a posh luxury escape and an opportunity to soak up some sun and culture before the busy fall season begins, a trip to Turkey should be on your travel radar. 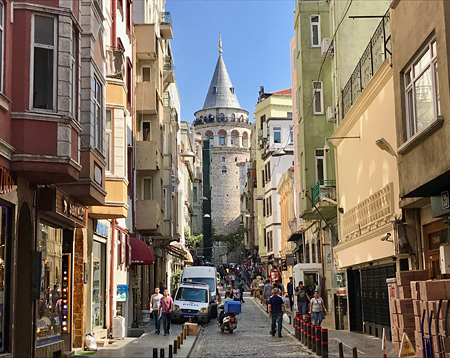 Your journey begins in Istanbul, the fabled city straddling Europe and Asia across the Bosphorus Strait. Founded in 7th century BC and controlling the trade routes of the ancient world, the imperial city of Constantinople was the capital of the Byzantine Empire until conquered by the Ottoman Empire in 1453. Today it’s one of the world’s most populous, cosmopolitan cities.

The best way to appreciate the city’s strategic location and its rich wealth of palaces, museums and fortresses is from the water. Hop on a boat cruise departing from the Eminonu Port at the base of Galata Bridge and you’ll soon be immersed in history as you travel up the Bosphorus. Mid-channel is the Maiden’s Tower, a white stone structure that served as a toll station in Byzantine times and later as a lighthouse, appearing more recently in the James Bond flick “The World Is Not Enough”. 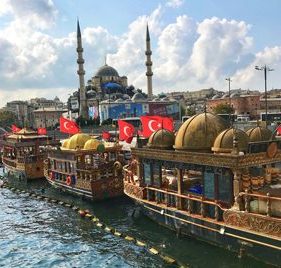 Other sights include the lavish Dolmabahce Palace with its waterside gates through which Ottoman royalty once entered from imperial barges, and Ortakoy Mosque near the Bosphorus Bridge. Built between 1853 and 1855 for Ottoman Sultan Abdulmecid I, this ornate mosque is neo-Baroque in style and features twin minarets and a soaring domed ceiling of pink mosaics. Also impressive is the Fortress of Europe, built by Mehmet the Conqueror in 1452, and the stately summer retreats once enjoyed by 19th century ambassadors to Turkey.

Back at Eminonu Port, it’s a short jaunt to Istanbul’s fascinating Bazaar Quarter, historic Sultanahmet Square and Seraglio Point, the headland where the Golden Horn, the Bosphorus and Sea of Marmora meet. To fully experience the historical riches of this area, you’re wise to contract a government-certified guide and driver. Not only will you get in-depth insights from an expert in archeological history and culture but you’ll get fast-track access at most palaces, mosques and museums. 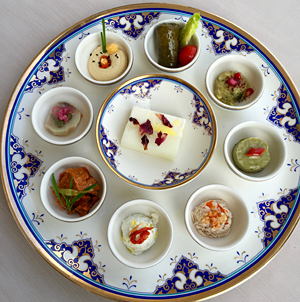 Highlights include the exquisite 1,400-year old Hagia Sophia, the atmospheric Basilica Cistern with its underground columns featuring Medusa heads and the kitchens, harem and precious treasures of Topkapi Palace. While the Blue Mosque is a bucket-list site, fewer crowds and spectacular skyline views make the impressive Suleymaniye Mosque, a masterwork by architect Mimar Sinan (1490-1588), a must-see for discerning travellers. Don’t miss the Spice Bazaar where you can sample your way through cheese stalls, fragrant spice stands, platters of Turkish delight and baskets of fresh almonds, walnuts and figs set beneath 17th century archways.

Wrap up your visit with a taste of Ottoman cuisine at Turga restaurant located within the Cirgan Kempinski Palace. This classic fine-dining experience features specialty dishes such as hot and cold mezze platters, Lamb Külbastı and Sea Bass in Rock Salt Dough based on recipes from the Ottoman era. Time your visit for sunset when you can watch boating action on the Bosphorus or do some celebrity spotting. The hotel is popular among A-listers, dignitaries and royalty – Eric Clapton, Princess Caroline of Monaco, Robert DeNiro and Jennifer Lopez have all made appearances here.

More star power awaits at The Bodrum by Paramount Hotels & Resorts, a glamorous five star resort in the Mugla province on Turkey’s southwestern coast, easily reached via Turkish Airlines. Although summer months see crowds, September is a quieter month of brilliant blue skies, balmy weather and light breezes making it an ideal time for soaking up the Aegean atmosphere. 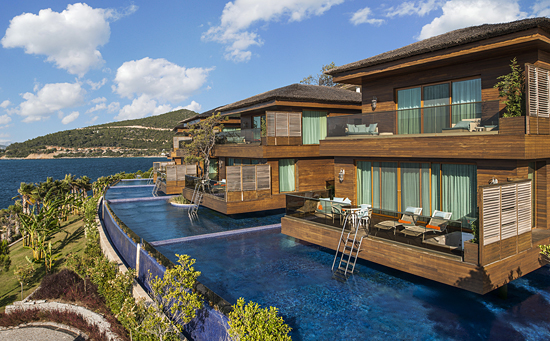 Maldivian style Premiere Villa at The Bodrum
Photo: The Bodrum by Paramount

Located near Milas–Bodrum Airport (or by helicopter or private yacht), The Bodrum by Paramount Hotels & Resorts is the world’s first property branded by the venerable Hollywood picture company. Another is nearing completion in Dubai, but for now, this elite collection of 134 rooms comprised of suites and exclusive villas offers an ultra-luxury Paramount pictures lifestyle in a breathtaking hilltop setting with its own private beach.

All guest rooms feature sea views, many with private Jacuzzis, swim-up or private infinity pools and other unique individual characteristics. Four a la carte restaurants, a main buffet restaurant, two poolside and snack restaurants, four bars and a patisserie round out the offerings, available on breakfast only or all-inclusive basis. Guests who opt for the villa concept enjoy access to butler service, private waterfront cabanas as well as many other perks.

While it’s tempting to stay in this luxe hideaway gazing at the Aegean Sea for your entire stay, the nearby city of Bodrum offers several diversions that make it worth rolling up your beach towel for a day or more. Although Bodrum Castle (built in 1402) and its Underwater Archeology Museum are closed for extensive renovations until 2019, the dazzling blue marina features a pretty promenade with the imposing castle overhead. 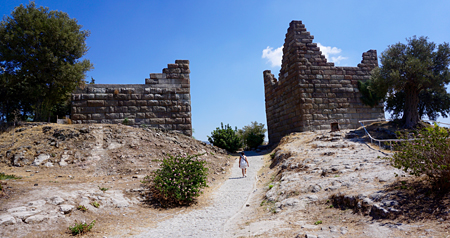 History also looms large at the nearby Mausoleum of Mausolus, one of the Seven Wonders of the Ancient World as well as at the Myndos Gate, a remnant of the wall that once surrounded the city of Bodrum (when it was known as Halikarnassos), until conquered by Alexander the Great in 4th century B.C.

As I wrap up my own visit with a culinary journey through the olive groves, vineyards and pine forests of the Bodrum Peninsula, I see pomegranates beginning to change colour. They’ll continue ripening to a brilliant red until harvested and celebrated in autumn festivals – a reminder that my own Canadian fall awaits my return home. 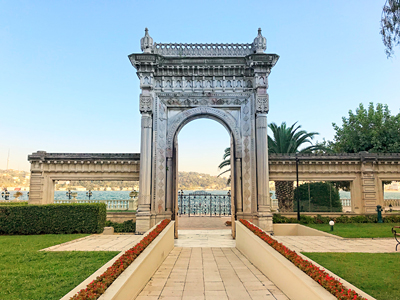 Visa Requirements: Canadians need a visa to travel to Turkey. Get an e-visa online at www.evisa.gov.tr/en 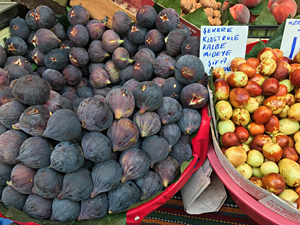 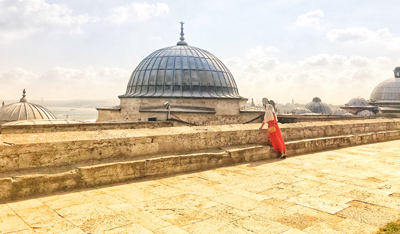 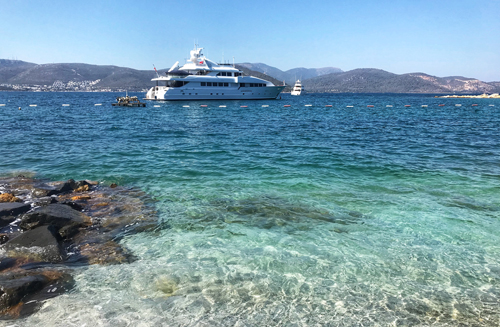 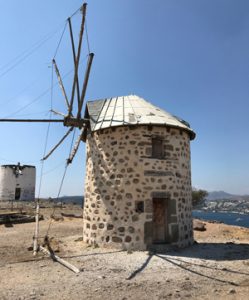 Windmills atop the Bodrum and Gumbet Bays were built in the 18th century
Photo:Francisco Sanchez 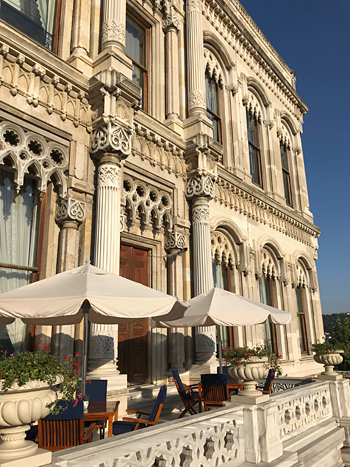 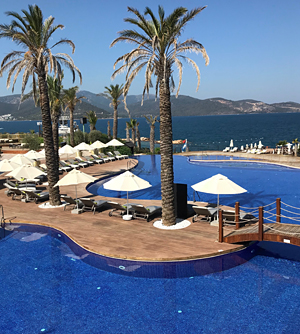