Already known as a ‘mature’ artist with up to three decades worth of work that includes everything from sculpture, film, installations and photography, some might describe John Schweitzer’s ‘Text & Image’ work as some of the singular art of our time.

“Point is I feel as if I’m working at the height of my creative powers,” writes Schweitzer. “If my work is being labelled as ‘classical’, I accept this designation for an art that does not succumb to the typical ‘style du jour’…insofar as it continues to quietly engage the viewer with its cerebral and visual appeal.”

Simply put, that means that Schweitzer wants his work to have as much to say in the middle of the second millenium as it did two weeks ago when it first found its place on someone’s living room wall. Although he initially wished to become a writer when he first enrolled in Western University’s Literature program, a summer course in visual arts set the stage for what Schweitzer described as “…an epiphany” when he realized that he could create a working synthesis between text and image in order to make a lot of what he described as “…significant, as well as beautiful art.” 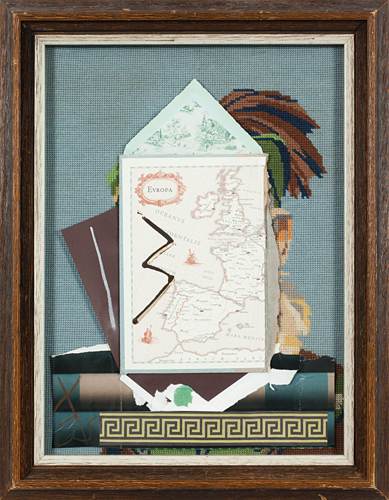 John Schweitzer currently has a World Premiere exhibition of Hadrian at the Canadian Opera Company in Toronto until October 31, 2018. Pictured here: Vallum Hadrianus: Europa 2010 acrylic, collage, pastel, textile on board

Aside from his previous work with different media, Schweitzer in primarily known for what he’s done with ‘collage’ – a modernist medium that continues to propel the image and text that provides the foundation for a compelling assortment of visual narratives that continue to define Schweitzer’s work.

Beginning in 1991, Schweitzer’s initial series of collage pieces named Sunt Lacrimae rerum blazed the trail for nearly three decades of work that include Benjamin’s Alphabet: Diary of a series that celebrates the work of German philosopher Walter Benjamin who was one of the 20th century’s leading advocates of literary collage and montage.

Following a quick look at his recent exhibition in the Westmount library, Schweitzer is working on a renaissance concept that’s defined by an artistic hierarchy with an overt allusion to his own literary heroes. As ever, the man understands how the classics continue to influence our own time and passion. In much the same way as a line can be drawn from Bob Dylan’s ‘Blood on the Tracks’ to Arthur Rimbaud’s ‘Dawn’, Schweitzer draws a line from his own work to what writers as such as Goethe, Donne and Wilde did to define their own times. In Schweitzer’s world, everything is connected and nothing can be ever taken for granted. While most people might consider a used metro ticket to be nothing more than a bit of scrapped paper, Schweitzer wonders what happened to the ticket stub a German soldier brought back to his commander after his platoon entered an suburban Moscow metro station at the height of the Russian invasion during the winter of 1941. For some, a passport may be just a little booklet, but Schweitzer understands the iconic significance of a document that can mark the difference between a long and productive life in Canada and a violent death in the dust of an African desert. In the ‘The Snows of Ruskin’, a garish strip of green and gold flecked wallpaper refers to Oscar Wilde’s final moments when he is supposed to have said “Either that wallpaper goes or I do!”

Wilde is now buried in a Paris cemetery, but the wallpaper is still there.

“Self-avowed ‘neo-Luddite and technophobe,” Schweitzer went on to tell The Montrealer that he has no I-Phone, no computer, “…not even a driver’s license. “My only palpable material culture is paper and that, of course, is purely logical for a collage artist such as I am.”

Maybe so, but his careful mix of text and image continues to create a powerful visual synthesis that continues to call for our undivided attention to what Marvin Gaye was talking about when he sang ‘What’s going on?’

It may take some time, but this is the work that’s bound to become some of the classical art that builds a bridge between the past and what’s to come.