All aboard for one of the world’s great train trips

“Wow, you’re taking the train out west – I’ve always wanted to do that!”

It’s a comment familiar to anyone who has booked passage on The Canadian, VIA Rail Canada’s flagship, transcontinental train. Indeed, there no more quintessentially Canadian experience than crossing this vast country by rail – all 4,466 kilometres to Vancouver, passing Ontario’s lakes and forests, the surprisingly scenic Prairies, and the stunning mountains and canyons of Alberta and British Columbia. 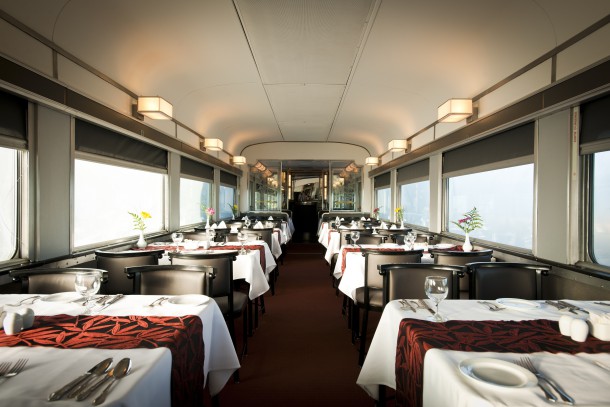 These days that distance is measured from Toronto, The Canadian’s eastern terminus. Until the 1980s, the journey on The Canadian could begin in either city, from Montreal’s Windsor Station and Toronto’s Union Station, with the two sections being joined near Sudbury for the great trip westward. Nowadays, the first leg of the cross-Canada journey is on one of VIA’s five scheduled trains to Toronto’s Union Station, from where The Canadian departs three days a week (spring though fall). The train follows the Canadian National Railways main line north to Sudbury and into the forests of northern Ontario, westward to Winnipeg, then northwest to Edmonton and into the Rockies and dramatic Jasper, before following the Thompson and Fraser valleys to Vancouver and the western terminus, Pacific Central Station.

The journey doesn’t disappoint, as you are pampered by an exceptionally friendly, attentive staff in a unique retro-comfort that makes the trip all the more authentic. Taking the train across Canada not only is a chance to ride the steel rails that propelled the country’s growth more than a century ago – and see every foot of the country pass by – it’s also an opportunity to disconnect from the frenzied pace of today’s ever-present telecom environment. Indeed, travelling on The Canadian means doing without internet access (VIA only offers WiFi on its eastern trains) and, in remote areas such as northern Ontario and the B.C. interior, cellular telephone service. 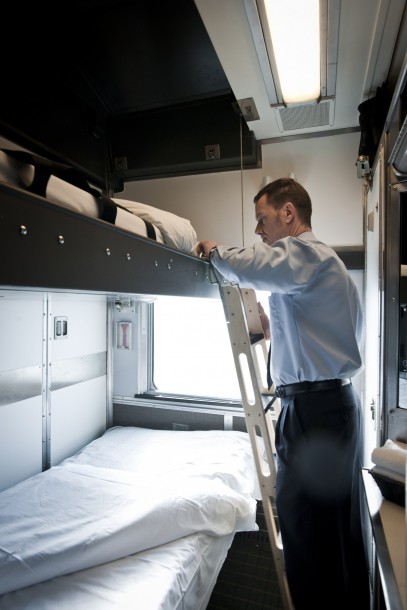 Cabins convert to sleepers in 5 minutes

The three days and four nights it takes to reach Vancouver allows plenty of time to catch up on your reading – although most passengers find themselves spending more time looking out the windows, even when passing through the Ontario forest or the flattest sections of the Prairies. The seemingly endless trees and lakes of the northern shield, not to mention the horizon-to-horizon prairie sky, is testimony to Canada’s hugeness. In fact, one of the great revelations of riding this train is your realize the Prairies aren’t necessarily flat. A spectacular example of this is the AssiniboineRiver valley in western Manitoba, which the train follows for several hours, with panoramic views across the valley that cuts through the plain, with the river meandering seemingly everywhere in the expanse below.

Inside the train, it’s all about the passengers. You get to converse with a lot of people from around the world. Our fellow travellers included not just Canadians from most provinces, but also Americans, British, Europeans and Australians. Most had taken long-distance trains before, closer to home, and were on board to experience, in their words; one of the world’s famed train trips. (Apparently Canada is known for more than just Mounties, maple syrup and certain mayors…)The Americans in particular were impressed by the service and the chefs’ offerings. While there were a few grumblings about schedule delays – CN freights generally have priority on the tracks, forcing The Canadian to wait on sidings till they pass – those comments subsided as the train made up lost time. The schedule anticipates such delays. 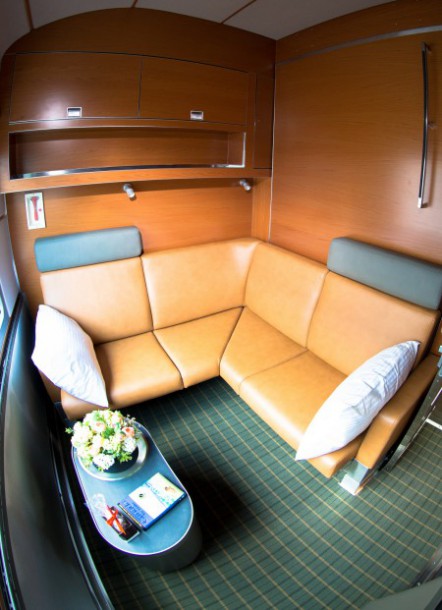 VIA Prestige_Class by day to be in service in 2015

While The Canadian includes several basic coaches in its train, most travellers book the train’s Sleeper Plus class, which provides a comfortable bunk, three meals daily in the dining car, and access to all of the train’s dome cars and lounges. The high quality service on board reflects the staff’s obvious pride in working on this historic train, recently named one of the world’s top 25 trains by The Society of International Railway Travelers. Coach passengers can purchase meals in a lounge in the adjacent Skyline Car.

The Canadian’s coaches date back to 1955, when the Canadian Pacific Railway launched the stainless-steel-sided train as its flagship transcontinental service (see sidebar on Canada’s transcontinental train past). The equipment has been meticulously maintained over the years, most recently with more than $22 million invested in renovations and refurbishments between 2010 and 2012. And, soon to come is The Canadian’s new Prestige Sleeper Class will be introduced next spring, with significantly larger cabins for two in the Park Cars, with huge windows and private washroom including shower, a flat-panel television with video selection, and minibar stocked with beverages, and the services of a Prestige Class Concierge. 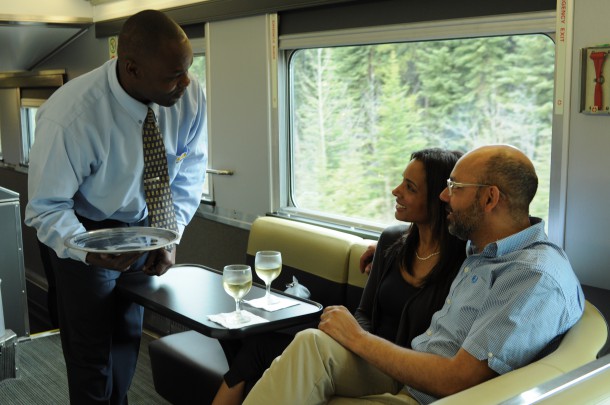 The bullet lounge in the rear park car

In the busy summer months, The Canadian can be as long as 30 cars, with three Skyline scenic dome cars as well as the iconic Park dome car at the end of the train, with its bullet-nosed tail. The various dome cars have lounges where food and beverages may be purchased. For Sleeper Class passengers, however, the three excellent full-course meals a day provide more than enough to eat, all on linen tablecloth with fine china and flatware. Economy Class passengers have access to the first Skyline dome car and its for-purchase food and beverage service.

The meals are authentically Canada, including lamb, fish, beef and pork. Each menu offers appetizers and five main dishes, plus a choice of dessert – and always includes a vegetarian option. All is served with gourmet finesse and impressive dexterity. The servers claim that, due to training and everyday practice, it’s actually easier to wait on tables when the train is underway, even gently rocking at high speeds. Breakfast is open seating, and you have a choice of three sittings for lunch and dinner. All tables seat four, and many of your conversations with fellow travellers happen here.

There are four types of sleeping car accommodation: berths (the classic Pullman-style bunks with curtains drawn for privacy), cabins for one, cabin for two, and cabin for three (once referred to as a “drawing room”). While the bunks in each are extremely comfortable, you must adjust to extremely tight space. If you think a cruise-ship stateroom is cozy, a train cabin is little more than a large closet with a window. But, after, all, these are train cars with obvious width restrictions, including the narrow car-length corridor that allows passengers to move about the train.

It’s remarkable what VIA includes in a sleeper cabin. By day, a two-person cabin has two comfortable, moveable chairs that can me positioned however the occupant wishes. By night, these chairs fold flat and stow under the lower bunk, which pivots down from the corridor-side wall, while the upper bunk is lowered down from the ceiling. It’s 60-year-old system that continues to work extremely well. The sleeping-car attendant can have your cabin converted from seating to bunk use (or vice versa) in less than five minutes. The bunks are exceptionally comfortable, with cozy comforters, and the train movement rocks you to sleep. 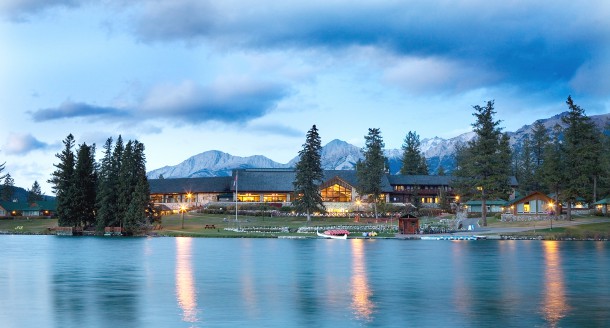 Each double cabin has a sink (with cover that folds over to use as counter space) and toilet (the latter in a closed “water closet”) and includes a narrow closet and closed cubby-hole above; a large shelf below the ceiling, above the WC/sink area; a convenient shelf above upper bunk; mini shelf above lower bunk; and leather pockets above both bunks. Each bunk has a reading lamp. There also is some stowage space under the lower bunk beside the folded seats.

You can opt to have one or both bunks (berths) left down for daytime naps. This is a particularly good option for the Park Car, which has three seating areas available only a few feet away: the Bullet Lounge, the Mural Lounge and Scenic Dome observation upstairs. The sleeping cars have an excellent shower, with plenty of hot water and good pressure. The shower compartment includes a change area. Cabins are equipped with towel and toiletry kits.

The Park cars are named after national and provincial parks, with lounges decorated with murals commissioned from Canadian artists such as A.J. Casson and Adam Sheriff-Scott. The car on our Toronto-jasper leg was the EvangelinePark (in Acadian Nova Scotia) and from Jasper-Vancouver it was the KokaneePark (in eastern B.C.).

Due to the cabin space restrictions, VIA asks that only small carry-on bags be brought into the cabins, with larger items checked in the baggage car. There is a generous checked baggage allowance. While unusual, passengers who are travelling to remote areas of northern Ontario can bring a canoe, hauling it of the baggage car at one of the numerous whistle stops.

Our train stopped briefly at only a couple of these, with longer scheduled service stops at places like Hornepayne, ON (nine hours northwest of Sudbury), Saskatoon and Edmonton, where an additional glass observation car is inserted into the train for the scenic mountain run to Vancouver. The longest stops are at Winnipeg, where the train is completely restocked and the crew changes, and at Jasper, a popular break in the Rockies. Many passengers disembark at Jasper for two days or more, resuming the journey on one of the next scheduled trains. Fairmont Jasper Park Lodge is a favourite place to take a break from the train trip and get some exercise, hiking or playing the resort’s world-class golf course. (See the August issue of The Montrealer for full report on this classic railway resort.)

The passage through the Rockies is done in full daylight. The train approaches the foothills at mid-morning, reaches Jasper by early afternoon and resumes the run over the Great Divide by late-afternoon, and leaves plenty of daylight left for the southward run down the ThompsonValley. The trade-off for all that mountain scenery is darkness in the Fraser Canyon, although in the summer months you can get up early and marvel at the southern canyon’s cliffs and rapids, including Hell’s Gate, and  wonder how on earth did railroad builders concoct such a route a century ago. 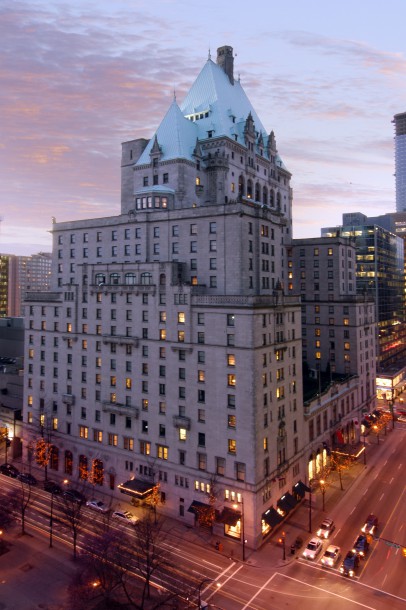 The journey reaches its conclusion in the lower FraserValley, its fertile fields and log-booms in the river a stark contract to the canyon and mountains traversed beforehand. The Canadian rumbled into Vancouver’s Pacific Central Station on time at mid-morning, a short taxi ride from our final destination, Fairmont Hotel Vancouver, one of the great urban railway hotels that were built in the first half of the last century. The landmark property is undergoing extensive renovation – yet the work in no way deters from its first-class experience. A bonus is the re-opening of the top floor The Roof restaurant and lounge, the hotel’s original dining room and now used as a premier event space. Two new restaurants will open on the main floor before the end of the year. (Check a future issue of The Montrealer for a full feature on the remodelled hotel.)

Hotel Vancouver is one of four Fairmonts in Vancouver, but there’s no better way to end the classic trans-Canada train journey than a few nights at this gracious 75-year-old hotel, built during the classic age of North American passenger rail.

One-way advance-purchase, discounted fares per person from Montreal to Vancouver start at $1,051 for an upper berth and $1,561 for a cabin for one or two. These fares include an economy class seat between Montreal and Toronto. Lower prices occasionally are available during sales, sometimes as much as 50% off full fare. Full fare information is on the www.viarail.ca, and check for extra savings at http://www.viarail.ca/en/deals. 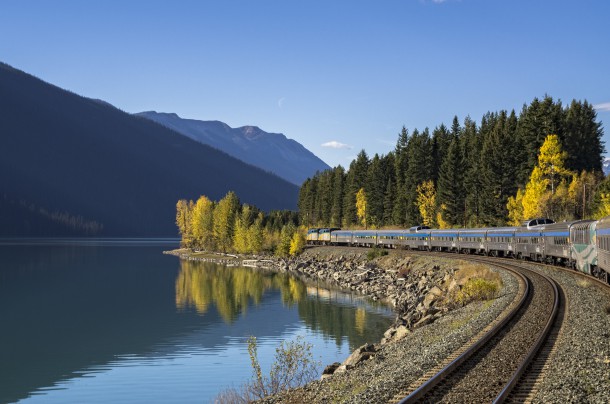 The Canadian hugs the shore of Moose Lake in The Rockies