Located at the confluence of the Ille and Vilaine rivers, in the mid-eastern section of Brittany, lies the city of Rennes. About an hour and twenty minutes from Nantes by train, and only an hour and a half from Paris by TGV, Rennes exudes medieval charm with its 286 timber-framed houses – the highest number of any town in Brittany. Its population of 63,000 students keeps the city lively and vibrant.

Upon the Jousting Field 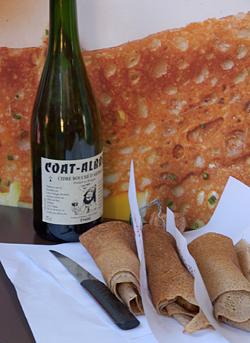 Every Saturday morning thousands converge on the old jousting field: Place des Lices. The second largest food market in France, Place des Lices is a beacon for top chefs and locals alike. Over 300 producers display their wares here. Fruit and vegetables paint a colourful array and piles of oysters and all sorts of seafood attest to Rennes’ relative proximity to the sea (a little over an hour’s drive). I noticed one particularly massive crustacean authenticate its freshness by trying to walk off a display table. Inside a covered building the presentation continues with local cheeses and meats, including a rare local breed of chicken called the coucou. Back outside, food trucks sell prepared specialties like the galette saucisse (a sausage wrapped in a buckwheat crepe). Pairing a galette saucisse with a fruity Coat-Albret cider makes a wonderful market brunch!

On the opposite end of the market are the flower stalls. Heaps of tulips, roses, daffodils and chrysanthemums are piled on table tops. People, with their shopping bags filled with local delights, make their way to these floral stalls to add a beautiful finishing touch to their dinner table. 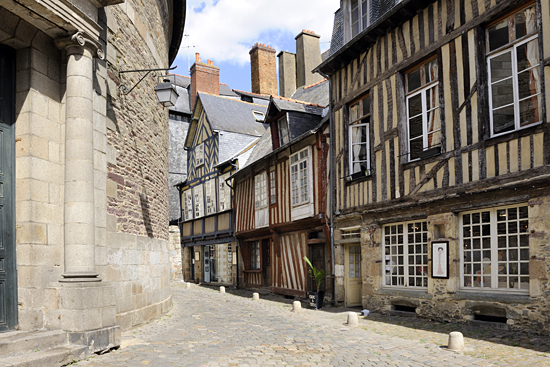 Near Place des Lices is the 15th century Portes Mordelaises. With stout, round towers on either side of its drawbridge, this gate was the main entrance to the walled town. The Dukes of Brittany would kneel here and vow to respect the rights and liberties of Brittany, before being crowned at the Saint-Pierre Cathedral. A few streets away, in the Place de la Mairie are two beautifully designed buildings. The classically inspired City Hall, built between 1734-1743, features a concave center section, topped with a clock tower. Facing the Town Hall is the graceful curved facade of the 1836 Opera house. Columned and adorned by statues, the Opera house’s convex facade was designed in response to the City Hall’s concave facade.

See You in Court

Another remarkable edifice is the Brittany Parlement building, now home to the regional Court of Appeals. Laid out around a central courtyard, the rectangular building was badly damaged by fire in 1994, but has since been carefully restored. Beyond the security check, tours take visitors into a series of 17th century art lined rooms. Carved and gilded wood paneling frame allegorical paintings on the walls and ceiling of the Great Chamber. This most opulent room also boasts an immense tapestry hanging on one wall, red and gold wall paper, red velvet chairs and several chandeliers. Here, on one small section of the ornate coffered ceiling they have intentionally preserved the blackened scorch marks from the fire. 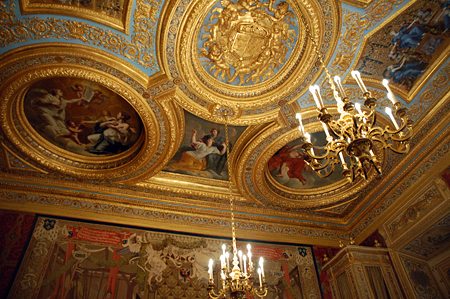 With chandeliers, gilded wood paneling and allegorical paintings, the Great Chamber is the most opulent room in the Brittany Parlement building
Photo: Julie Kalan

In the Salle des Assises, underneath a white and gold coffered ceiling, trimming paintings of clouds against a blue sky, the tour guide tells us the infamous story of a 19th century murder trial that took place on the premises. Over many years Hélène Jégado worked as a servant at many different households in the county. Often her employer or co-workers would become ill and die. But she so diligently attended to the sick that for years no one suspected her of malice – even when two relatives of the physician she worked for died! By 1851, investigators turned suspicion into action and exhumed a few victims. The autopsy concluded death by arsenic poisoning, believed to have been added to soup or cake. Tried and convicted for a handful of murders, it is commonly assumed that she was responsible for 30-60 deaths.

Not far away, on the Quai Châteaubriand in the window of the Durand Chocolatier is a cake inspired by the story of Hélène Jégado –a guaranteed arsenic free version. I had every intention of trying the affectionately dubbed arsenic and old lace cake, but upon entering the small shop an array of 40 specialty flavoured chocolates lead me to forget all else. A table of contents lists each of the distinct and sometimes unusual flavours covered in 62% cacao. I never would have paired rosemary and chocolate, but there is no arguing with such a tasty result. Each chocolate features its number on the bottom, so you simply check the list and request the numbers you would like. Without a good deal of self restraint I could have easily left there with one or two of every number! Just as I was prying myself away from the chocolates, they brought out a tray of traditional Breton butter cake Kouign Amann. Still warm from the oven, with its fluffy light texture, this is the best butter cake I have ever had.

A Heavenly Place to Find Hell 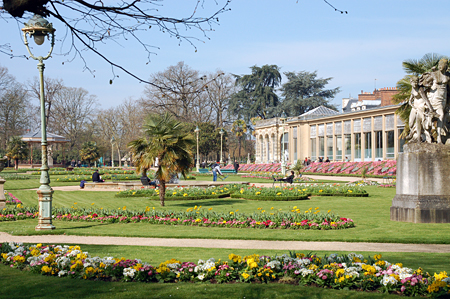 The 24-acre Thabor Garden includes a grotto, aviary, and areas of both French and English style gardens
Photo: Julie Kalan

Before the French revolution, the Thabor Garden belonged to the monks of Sainte-Mélanie Benedictine Abbey. During that time, an abandoned water reservoir on the grounds was used by the monks for canoeing and merriment. These activities so bothered the bishop that he condemned them and took to calling this spot l’enfer (hell). Hell is now a grassy area that is sometimes used as an open-air theatre. The beautiful 24-acre Thabor Garden includes a grotto, aviary, areas of both French and English style gardens, a playground and a circular rose garden containing over 2000 varieties.

Le Magic Hall is a completely unique place to stay – part boutique hotel, part friendly inn. Just off the entrance, is an open kitchen and long communal table where guests sit and enjoy a wide range of breakfast selections, including several options freshly baked on the premises while you sleep. A large lounge area, decorated with books, a typewriter and an old gramophone lead to a surprise music rehearsal room. Well sound-proofed, this rentable music room (that is open to guests when not in use) is furnished with a drum kit, bass, and guitar. Housed in a former movie theatre, the hotel’s 19 rooms feature art and performance themes: music, dance, cinema and theatre. A few 2-floor deluxe rooms, like my vibrant orange The Big Lebowski themed room and a King Kong movie room, have a cozy TV/sitting area and bathroom on the first floor, with a flight of stairs up to the bedroom. The dance theme rooms are more sedate and delicate with white wood floors, and pink ballet shoes hanging from bars along mirrored walls. So, there is truly something to suit everyone’s taste. www.lemagichall.com

Les Darons is a small restaurant that changes its blackboard menu daily, based on the freshest ingredients. The atmosphere is quaint and friendly, and the food is absolutely delicious. www.tourisme-rennes.com/fr/restaurants/les-darons

Le Piccadilly is located in the heart of the city, right beside the opera house. With outdoor seating when the weather permits, its large interior is divided into comfortable rooms. The menu delivers options including salads, oysters, foie gras, beef and oh so very tempting desserts. www.le-piccadilly.fr/

*This article explores part of a new tourism itinerary entitled A Modern Trail across an Old Country. The route invites travelers to discover Breton culture and heritage with stops in Nantes, Rennes, Saint-Malo and Mont St-Michel.