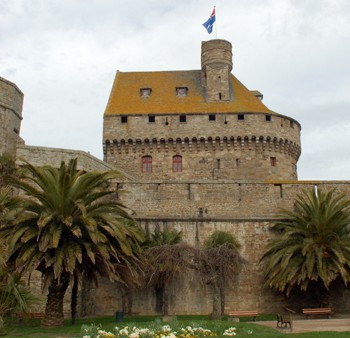 Perched upon a granite out crop, where the mouth of the Rance River meets La Manche (the English Channel), sits the walled city of Saint-Malo. From outside the tall grey stone ramparts, several entry gates offer glimpses into the city, where daring seafarer’s once walked the narrow cobblestone streets.

Today, beneath the Brittany coat of arms, St. Vincent’s arched gate is the main entry point. To the right of the gate is a towering 15th century castle that now houses the Town Hall and municipal museum. From the roof of the 40m high castle keep, far above any others, flies the proud Saint-Malo city flag. Divided into quadrants by a white cross, the flag is three-quarters blue, features an ermine on its red quarter, and dates back to 1590-1594 when the city was an independent republic. The local motto “Neither French nor Breton, I am Malouin,” dates back to this time. 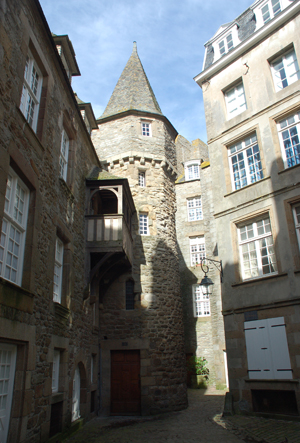 The turreted La Houssaye house, dating from the 15th Century, is believed to be the oldest house in Saint-Malo

Walking along the narrow cobblestone streets, I come upon the turreted La Houssaye house. Overlooking a small stone courtyard, its half-timbered balcony brings scenes of Romeo and Juliet to mind. Dating from at least the 15th century, it is believed to be the oldest Saint-Malo house still standing. It was one of a few buildings that survived the allied bombings during the time following the D-Day landings. Though the ramparts were left relatively unharmed, eighty percent of the town was destroyed while liberating it from the Nazis. However, unlike other cities that choose to rebuild with modern materials and design, Saint-Malo opted to rebuild much as it was before. Stone by stone, the city kept its charm and architectural legacy alive.

At the northwestern corner of the city, I make my way up to the ramparts by Place du Québec. Here a statue of the local corsair Robert Surcouf (1773-1827) points out to sea. As a corsair, Surcouf would attack foreign merchant ships, reaping significant bounties, all under the authorization of the French crown. During the city’s golden age, Saint-Malo was home port for numerous corsairs (or privateers) and their ships. Just outside the city walls, docked alongside the tourist office is a replica of one such ship: a three-masted 1745 corsair frigate. 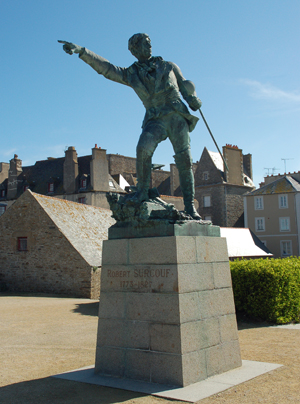 At Place du Québec, the statue of local corsair Robert Surcouf points out to sea

There are 1754m of ramparts encircling the city, with stunning vistas along their entire length. Far below the ramparts, lie beautiful beaches beckoning to be explored. Just beyond the beaches, and only accessible during low tide, are the small islands known as Grand Bé and Petit Bé. The further out and smaller island is topped with a fortress dating back to 1693. The larger, closer island is the burial site of the famous French writer, and local son, Chateaubriand. On the Plage de Bon Secours is a seawater pool, equipped with a diving platform, which has its water changed twice a day – with each high tide.

At the Bastion de la Hollande, another famous son of Saint-Malo is commemorated with a statue – one that all Montrealers are familiar with – Jacques Cartier. The explorer’s grave can be found within the St. Vincent Cathedral. Located in the center of the city, the cathedral is easily found as its steeple reaches well above the rest of the city skyline.

There is a plethora of dining options both inside and outside the rampart walls. While walking through the city I was surprised to discover Montreal Bagel. This small eatery is owned by two Malouins who had resided in Montreal for a few years and decided to bring their favourite Montreal food back home to Saint-Malo. A short drive outside the walls, Ar Iniz Restaurant offers up delicious, fresh seafood from its beachfront dining room.

*This article explores part of a new tourism itinerary entitled A Modern Trail across an Old Country. The route invites travelers to discover Breton culture and heritage with stops in Nantes, Rennes, Saint-Malo and Mont St-Michel. 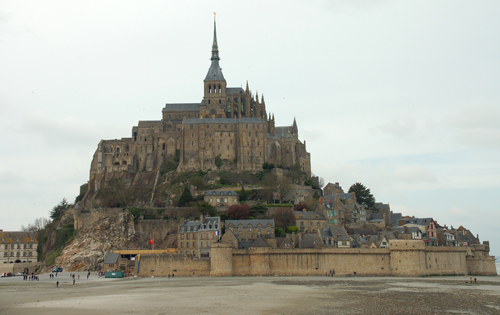 A UNESCO World Heritage site, Mont-Saint-Michel has been drawing visitors for over a thousand years

From Saint-Malo follow the Emerald Coast eastward to reach the iconic UNESCO World Heritage site of Mont-Saint-Michel. This granite island and soaring abbey have been drawing visitors for well over a thousand years. 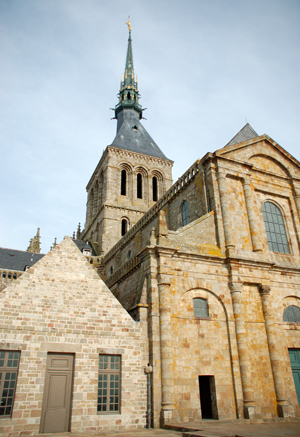 After the removal of a causeway and addition of a raised roadway, the bay of Mont-Saint-Michel, home to the highest tides in Europe, once again encompasses the mount at each high tide. From the parking lot, a free shuttle bus carries visitors the 2.5km to the mount.  Inside the city walls restaurants and souvenir shops line the narrow, often jammed, ruelle that ramps up toward the abbey entrance.

Before beginning your tour you will be required to tackle many, many stairs, but luckily the effort is worth it. The abbey itself is a marvel of medieval architecture, built on the peak of a pyramid-shaped rock.

The abbey church, built and rebuilt over a period of hundreds of years, features the rounded arches of Romanesque architecture in the nave, while the chancel is lit by large flamboyant Gothic style windows. After exiting the church, the tour route continues to many parts of the abbey, including the serene cloister, the refectory (where Benedictine monks ate), the Guest’s Hall (for kings and other VIP’s), the crypt of Saint Martin and the Knights Hall. There is much to see and I highly recommend joining a guided tour or using the audio tour to get the most out of your visit.