A trained chef with years of kitchen experience in Montreal and Paris, restaurant critic and food writer Lesley Chesterman brings a uniquely informed perspective to her columns

Within a few heartbeats of meeting Lesley Chesterman, we fell into an easy conversation about her passion for food, and the life choices that she’s selected. She speaks with a confidence that comes from a self-assurance and knowledge of her chosen field as a restaurant critic, backed by her own training as a pastry chef and years of working in restaurant kitchens.

Lesley and her sister grew up in Town of Mount Royal; her father a successful partner in an advertising agency and her mother was the Principal of Pius X High School. “I attended a French elementary school, and transferred to the English board for high school. So while I had a solid foundation in French, my written English was poor.” Lesley’s bilingualism would later prove to be a valuable asset in pastry school, as an apprentice in France and for her current weekly segment on Radio Canada’s French-language national network.  “I’m very proud that my show on French radio is the top-rated show across the country on ICI Radio Canada.”

“After high school, I studied ballet seriously, but came to realize that it was too physically demanding for me. By then, my friends were way ahead of me in university, and I really didn’t want to settle into a four-year commitment for a degree. I loved cooking, and I enrolled in the ITHQ (Institut de Tourisme et Hôtellerie de Quebec) to earn my diploma as a Pastry Chef. I starting working in restaurants before chefs were like rock stars with their own television programs. The kitchens were full of tired and angry men.” 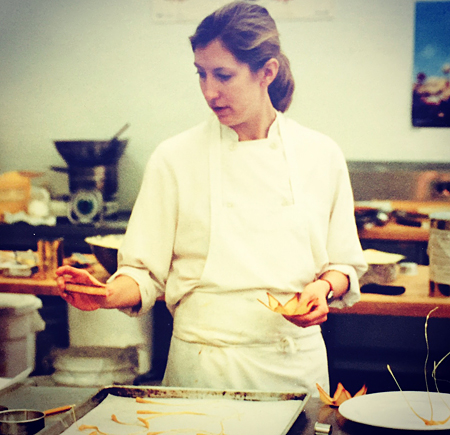 A young Lesley working as a pastry chef –
‘where’s that whipped cream….’

Lesley went on to explain that being a chef is a physically demanding occupation, standing for hours and hours, and working frantically during “the rush” to keep up with customer orders during the evening’s busiest hours. As the pastry chef, her day began at 4am and continued until 2 or 3 in the afternoon.

“I went to Paris to apprentice, and that was an interesting experience. At that time, many kitchen apprentices in France started at 14 or 15 years of age – some even as young as 12 or 13. I was 22 and working with teenagers. Still, it was rewarding. You’re working hard and also being creative. I loved the whole process of being creative. Sometimes I’d make a cake that was so good that I didn’t want to sell it…”

Lesley returned to Montreal and soon after began teaching pastry making at the Pius X Adult Education Centre. “I taught ex-cons, drug addicts – all manner of students and many of them tough. I had one student who danced around in class – and I was sure that he was high. During one class, I had the students each make a pie. His hands were shaking and he was extremely nervous when I came to taste his pie. It was delicious! I put my arm around his shoulders and congratulated him. He broke down in tears; saying that he’d never really accomplished anything – and that making this pie was very important to him.”

“As a writer, I want you sitting in the chair next to me

when I’m writing a restaurant review.”

While she didn’t know what became of that person, several of Lesley’s students have gone on to build successful careers as chefs and restaurant owners.  “I taught Mike Forgione, and he now owns Impasto, Gema and Chez Tousignant. He’s worked his way up and he’s now doing very well.”

Lesley enjoyed teaching, but after three years she realized that it’s repetitive nature was affecting her enthusiasm for the job.

In 1996, Lesley was speaking to Julian Armstrong at The Gazette about a column offering easy dessert suggestions, noting that there was an error in a recipe for Crème Brulée. “I’d made over 200,000 crème brulées in my career, and I knew what it was supposed to look and taste like. Julian suggested that I write my own story – and I started with an article about Irish Tea for St. Patrick’s Day, and then another and another.”

“Up to then, most food stories were written by journalists who were writing about food or restaurants. As someone with extensive food and restaurant experience, I wrote in the first person, as opposed to writing in the third person as a detached observer. I could never write something like; ‘One was underwhelmed by the bland…’ It’s just not me. I joined a growing number of writers who were writing in the first person. This was a major departure, in that as a writer, I was establishing a relationship with the readers – I was talking directly to them. As a writer I want you sitting in the chair next to me when I’m writing a restaurant review.” 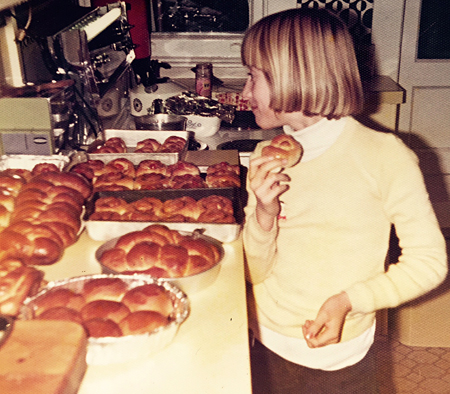 Even at a young age – Lesley loved to eat!

“I had approached The Gazette about writing a food column, and shortly afterward their restaurant critic retired. Management decided that I and two other writers would compete for the job.” Lesley won the competition and at thirty-three, she became The Gazette’s restaurant critic in 1998.

“My Dad has been one of my mentors, giving me good advice about writing and being a communicator. He’d tell me; ‘Be sure of what you’re saying. Be clear!’ My job is to be opinionated, and my Dad helped me with that part of my work.”

“Unlike a trained journalist, my professional accreditation is in cooking. I’ve worked in restaurant kitchens and taught many chefs. I have a deep knowledge of what’s going on in a kitchen.”

“Going out to a restaurant is more than simply eating. The decor, ambiance and especially the service are all important ingredients for a good night out. I have a responsibility to our readers to give them that information. And that includes prices. Readers need to have an idea of what to expect in terms of price. Many owners don’t like that I include prices, but our readers need some guidelines”.

“I live my life in search of delicious”

“I also believe that a review should be entertaining – nothing wrong with giving them a laugh. I’m not afraid to state what a chef can do to improve a menu, a dish or service.”   Lesley has received very strong responses to some of her reviews. “I’ve been threatened and called degrading names by some angry restaurant owners. I try to make my critiques constructive. Enthusiasm goes a long way in the restaurant’s favour.”

Other owners use criticism constructively and use it as a way to make improvements. “One place I visited had a mediocre and overpriced wine list. I don’t have a problem with a decent mark-up for the wine that a restaurant is serving; but in this instance the mark-up was too much. I later received a letter from the owner, stating that after he read my review – and he realized that I was right. He completely revamped his wine list and prices, and he told me that his business had improved!”

“When you become a chef, your goal is to own your own place. Look, I’ve worked in kitchens and I know that it’s hard to be a chef, run a business, hire staff and greet customers. But you have to be able to do all that if you want your restaurant to be a success. My job is to tell people about and if necessary, provide constructive criticism.”

“Montreal is the only Canadian city included on the influential foodie web site, www.Eater.com. Toronto and Vancouver were once included, but are no longer covered. Montreal is one of the top food destinations in North America. People do come here in part to dine at our outstanding restaurants. Food is the new theatre. We have to be proud – our restaurant scene is really good.” 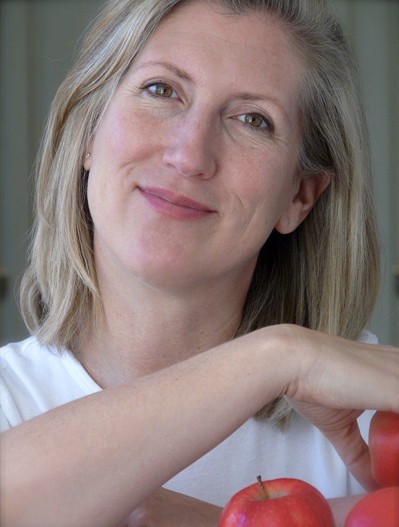 Lesley has a fresh approach to her
restaurant critiques, often inventing words like “quaffable” to describe a decent wine

Lesley is fluently bilingual and switches easily between French and English. That said – she recognizes that in too many instances we still have Two Solitudes. “I think that we can bridge that gap with food, dining out in different parts of the city and learning about our local suppliers. For example, I didn’t used to particularly like cheese, but I learned that we have 300 varieties of cheese produced in Quebec, and now it’s become an integral part of my dining at home and in restaurants.”

Lesley broke with tradition and decided not to be anonymous. “It’s really not practical anymore. As a restaurant critic and food writer, I have a personal brand. Its part of the world we live in… and, like everyone else, I have to earn an income. Having a personal brand is part of that in today’s world.”

True to her roots and training as a chef, Lesley loves to cook. “I cook obsessively and constantly. Cooking is therapy.” Lesley shares the home she grew up in with her 12 and 15-year olds, and her boyfriend Jean Aubry, the celebrated wine columnist for Le Devoir and wine blogger for the SAQ. One of Jean’s specialities is finding and recommending good wines for under $20. With a wry smile Lesley leans forward and confides with a chuckle; “We’ll sometimes have 3 or 4 bottles open to sample during an evening. But we don’t drink it all – we can’t do that anymore.”

As you might expect, holiday travel involves searching for great and unique restaurants. “When the kids were young, their eyes would glaze over when we told them that we’d being going out for dinner. I love to travel, but to be fair – we have to take them on some beach vacations, although I’m not a big fan of all-inclusive cuisine.”

I ask Lesley how she goes about doing her fieldwork to prepare a review. “I always go out with three people. We’ll order three starters, three main courses, and three desserts. We try each other’s servings. That way I’m able to try nine different dishes.” Anticipating my next question before it’s asked, Lesley states; “I like everything as long as it’s well prepared.  I’ve developed an appreciation for a wider range of cuisine from when I started. ”

Lesley Chesterman is a high energy person whose work is her hobby. She’s been able to combine her knowledge about food preparation, her personal love of cooking, and a flair for being an excellent communicator to become Montreal’s most popular and well respected restaurant critics, in both official languages. Her column appears weekly in the Saturday edition of The Gazette. Lesley is on radio Wednesday mornings at 7:10 with Terry DiMonte on CHOM 97.7, and Tuesdays on ICI Radio Canada’s Médium Large, broadcast nationally.