Born in the Barbados parish of Saint Michael in 1988, Robyn Rihanna Fenty began honing her throaty, arresting vocals at an early age, influenced by such iconic talents as Madonna, Bob Marley, Janet Jackson and Mariah Carey. 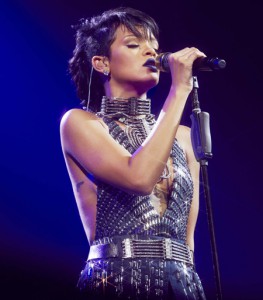 Her dynamic debut album, Music of the Sun, garnered much attention due to the popularity of her highly addictive dancehall-flavored sound.

But it was 2007’s Good Girl Gone Bad that catapulted Rihanna into icon status. Moving beyond her Caribbean music roots, she displayed her knack for reinvention by shifting to more up tempo dance tracks. Leading the charge was the album’s first single, “Umbrella.” The track became the undisputed #1 pop song of the summer, dominating the pop, urban and crossover Billboard charts for 52 weeks in a row.

In November 2012, Rihanna embarked on her 777 tour, where she performed in 7 countries in 7 days leading up to the release of her seventh studio album, Unapologetic.

Now, she brings her Anti world tour to Montreal for two nights at the Bell Centre.