The free outdoor site of this 17th edition of MONTRÉAL EN LUMIÈRE promises to be nothing short of magical! With completely reconceived lighting effects and displays, and a redesigned site extending beyond the Place des Festivals and the Place des Arts esplanade, fans will revel in a magnificent and dynamic playground packed with installations and activities for all, most of them free. Of course, our new additions include an array of activities focused on our grand featured city, Shenzhen, a giant illuminated marionette show created specially for MEL and an exclusive avant-premiere of an installation from the immense Illuminart project, a panoply of technological works that will spring fully to life during the next edition of the festival, kicking off festivities for the 375th anniversary of Montreal. And let’s not forget the great MEL “classics” including the urban slides, the famous Zip-line that allows fans to zoom over virtually the entire site from west to east, the ferris wheel and the Gourmet Pit-Stops, ready to once again tempt and amaze us with their inspired menus. And if that isn’t enough, we’re extending the hours on the free outdoor site to include the winter break week, for even more time to celebrate! From February 18 to March 5…

The featured city (or country) has probably never been so beautifully represented on our outdoor site! First of all, it will be utterly impossible to miss the one hundred miniature Kongzi figures taking over the centre-west steps of the Place des Festivals. Kongzi? Yes, that means Confucius, and in a larger sense, also embraces other philosophers and sages united by the same school of thought from traditional Chinese culture. The Hello Kongzi project aims to promote the universal values of Chinese culture—kindness, rectitude, propriety, wisdom and sincerity—and invites the entire world to discover China from a new perspective. Right next door, you’ll find their big brother, an enormous version of the Kongzi, an ice sculpture standing 4.5m tall!

A little further south, the Hello Kongzi Dome is also dedicated to our eponymous hero, with a kiosk offering information on his history, a Chinese shadow puppet workshop (where you can make your own short film, image by image!) and another letting you create Chinese lanterns. Kongzi will also be in the MAC, as part of a painting workshop inviting fans to paint their own figurine. In the Galerie de la Maison du Festival, fans will find an exhibition of 24 Shenzhen design posters—remember that Shenzhen, like Montreal, has been a member of the UNESCO Creative Cities Network since 2008, and has been named a UNESCO City of Design! Finally, the Grand Chinese Ferris Wheel (right in the middle of Ste. Catherine St., in front of the MAC) will lift fans up for a ride in the sky and a magnificent view of the illuminated site, and a photo exhibit will showcase Shenzhen at its loveliest. And join us to kick off the party with a 100% thrilling open-air Chinese pop concert, the Shenzhen Pop Music Show (February 18, 8 p.m., RBC Stage)!

This year will also feature the very first Festival of Lanterns in Montreal’s Chinatown. From February 6 to 29, giant pandas and traditional lanterns created in China will illuminate Place Sun Yat-Sen and the pedestrian corridor of De La Gauchetière West to celebrate the arrival of the Chinese New Year (Year of the Monkey). In collaboration with the Consulate General of China in Montreal and the Montreal Chinese Chamber of Commerce. 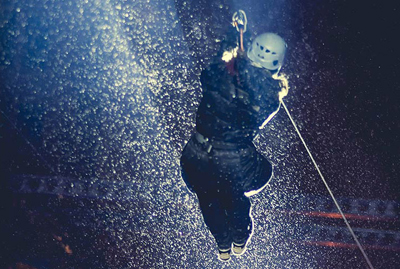 Zip-line
This sound-and-light version 2.0 of the Zip-line is an immediate hit with festival fans! This very popular attraction features two cables stretched above the outdoor site, allowing fans to zoom over the action, from the Place des Festivals almost all the way to St. Urbain Street! In the RBC Someday Zone, friends and family members can watch the daring riders soar over the illuminated site while they settle comfortably into Adirondack chairs (even a gigantic version) around a supersized fireplace and ice sculpture. They can also take a selfie and send the results via #Someday, then collect a prize from the Twitter Vending Machine.

ARTLUX interactive station
Everyone already knows the illuminated zone dominated by the big glassed-in Boîte Bell in the middle of the Place des Festivals. This year, right next door, discover the ARTLUX interactive station, an extraordinary experience inviting participants to become both artists and models and create digital artworks that will be projected and illuminated live on their bodies and faces. The results will be photographed and sent to each participant.

Espace Casino de Montréal
Come and discover the exciting contrast between Montreal winter and the colours and ambience of the South Seas… featuring diverse menus, fantastic décor, music, entertainment and, of course, extravagant cocktails! It’s the imaginary fusion of a Polynesian dream and Quebec reality, with fiery percussion demos by the bateria LE BLOCO, live animated characters, ice sculptures en direct created by the masterful Laurent Godon et fils, and live-action surfing duels in a full-on party atmosphere – come and electrify your senses with the best kind of culture shock! 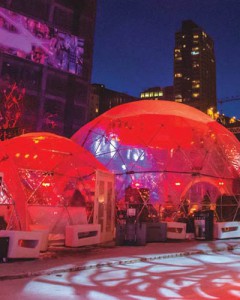 Le Bistro du festival presented by the SAQ
Here, festival fans will be on home ground. Our trio of geodesic domes offers a menu including cheese platters, soups, dumplings, porchetta sandwiches… and a selection of wines, cocktails and beers. And don’t forget the now-classic All-Duck tasting evening and the new All-Pork tasting evening. Fans can also treat themselves to the special new event 5 à huîtres on Fridays, 5 p.m. to 8 p.m., where they can enjoy Notkins oysters perfectly paired with wines suggested by a SAQ product expert!

Galerie de la Maison du Festival
Spazuk, Chant libre — Since 2001, Steven Spazuk has expressed his art through the unique technique of “fire-painting” images onto paper. His paintbrush is an open candle flame, burning his blank sheet to create a soot effect, which he sculpts using pens, feathers, scrapers and brushes. In his new exhibition, he hands the mic over to the birds, letting them sing loud and proud that they want to keep on living, whistling and chirping, whether solo or in a big band format. And it is magnificent! The artist will also offer an exclusive performance in the Galerie during the Nuit blanche (February 27). Free admission. February 18 to May 15. 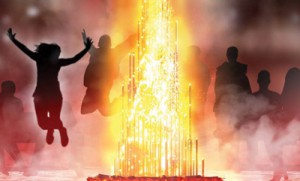 The very first interactive Illuminart installation!
A new free event solidifying Montreal’s position as a “Smart and Digital City”. Enjoy the Island of Warmth, a bonfire of bulbs that flashes to life and activates under the effect of human body heat! As they stroll and dance around, festival fans will stir up the embers and send the flames spiraling higher, swirling and whirling and creating heat, light and music. Awaken your inner flame! On De Maisonneuve Blvd., corner Jeanne-Mance.

Espace Financière Sun Life
A wide array of activities await in front of the Musée d’art contemporain, from entertainment—musicians, dancers, jugglers, fire-breathers and street artists—to our ever-popular braziers, whether you’re roasting marshmallows, grilling sausages or simply warming up a little. The Brighter Life Journey also returns to help us realize the impact small gestures have on our daily lives… and our finances. It’s an extraordinary immersive experience allowing participants to use the famed Oculus Rift virtual reality glasses to bring one of 3 major projects to “life”. 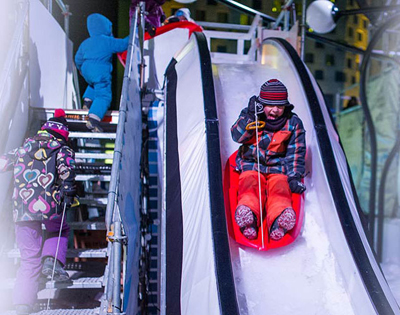 The Place des Arts esplanade and Ste. Catherine St.
The Milk Family Fun Zone and its two urban slides
The kids want an encore… and so do the grownups! Welcome to the perfect family rendezvous site “above” the Place des Arts esplanade: the Milk Mini-Slide, the gigantic Urban Slide—a wild 110-metre long serpentine descent featuring sound effects and multicolored lights!—as well as Giant-sized parlour games, a photo contest and, at the foot of the long slide on Ste. Catherine St., the Our cheeses Grilled Cheese Bar and Milk Bar!

Laval: soup is served!
What’s better than a piping hot bowl of home-cooked soup to warm your heart and tantalize your taste-buds in the dead of winter? Join us for a bowl flavored with pumpkin, curry and coconut milk prepared by chef Pascal Laurier and the Ferme Jeunes au travail de Laval in front of Bistro Le Balmoral, on Saturday, February 20 from 4 p.m. It’s all free… while it lasts!

Sunwing.ca Photo Studio
Get into the #ModeSunwing with this special Gif! Ease into the mood created by the tropical décor and Caribbean music and imagine yourself relaxing on one of the world’s great South Sea beaches… And by participating in the contest, you could win a trip to the Royalton Cayo Santa Maria, Cuba thanks to Sunwing.ca! 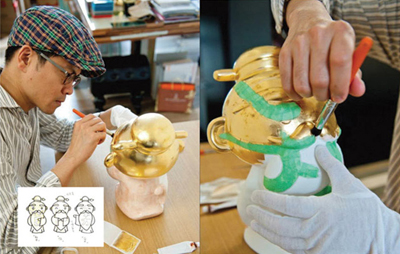 Musée d’art contemporain: free Hello Kongzi activity
The Carnaval culturel international Hello Kongzi, MONTRÉAL EN LUMIÈRE and the MAC invite festival fans to paint Hello Kongzi figurines. Your creations will transpose the traditional Chinese school of thought to different cultural contexts in a captivating and creative way. Each  figurine measures 33 cm, and the project will take about 2 hours to complete. Starting Thursday, February 11 (schedule, registration and details at montrealenlumiere.com). In addition, from February 18 to March 6, the MAC will present a free pedagogical exhibition showcasing figurines painted by participants during the workshop!

Le Mondial des Cidres 2016
An event inviting everyone to appreciate the savoir-faire of twenty Quebec artisanal cider producers and discover cider in all of its forms. Complexe Desjardins’ Grande-Place, Thursday, February 25 to Saturday, February 27 (program and information: mondialdescidres.com).