This year marks a significant anniversary in world history; seventy years ago Allied forces stormed the beaches of Normandy, and changed the tides of World War II. It was June 6, 1944 when Canadian, American, and British troops took part in the greatest amphibious assault in recorded history.

Like many of us, my knowledge of this world changing event came mainly from History channel documentaries, shown each November, and movies like Saving Private Ryan and The Longest Day. While these films are enthralling and capture the essence of the day, there is nothing as moving and transformative as being at the real sites in Normandy. Some say that we must visit these hallowed grounds to honour those brave souls; I think it is by visiting these sites that we truly understand why we do honour them.

The Juno Beach Centre, in Courseulles-sur-Mer, tells the story of the Canadians that battled their way up the beach on D-Day and those that gallantly fought from Italy to the Netherlands. Housed in a titanium clad building, permanent and temporary exhibits provide a better understanding of Canada’s vital contribution during WWII. In one of the final exhibit rooms, “Some Came Back, Others Did Not,” the names of the over 45 000 Canadians that died fighting in WWII scroll along the wall. 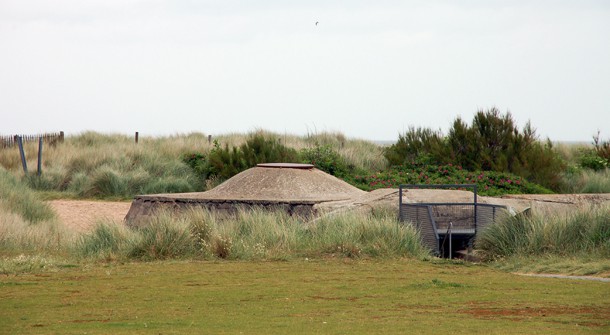 The apex of my visit is the guided tour of a German bunker, located just in front of the Centre. At the request of veterans, tour guides are a select group of knowledgeable young Canadians. These young, fresh faced Canadians are the same age as many of the soldiers that landed on Juno Beach that fateful day, and with bravery well beyond their years fought and fell where I now stand.

Like an iceberg, only the top of the bunker is visible above the sand. Inside the concrete hull, our guide, 19 year-old Louis Lebel-Bouchard, tells us about the sand-covered escape hatch in this former German observation post. An underground Command Post was added to the tour this past April. 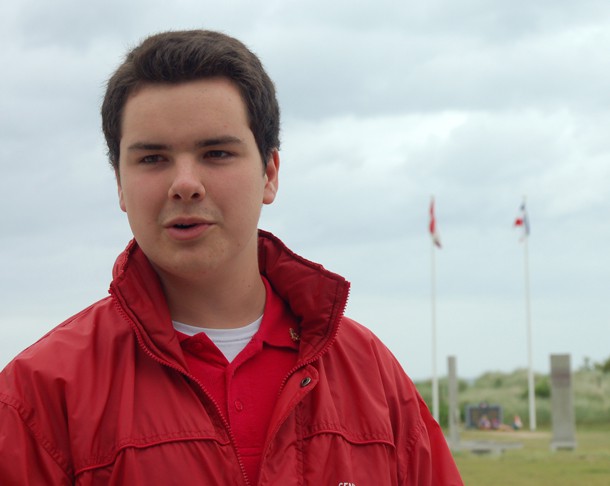 Like all the young guides at the Juno Beach Centre,
Louis Lebel-Bouchard is Canadian
Photo Julie Kalan

Retracing the steps of heroic Canadians during WWII should undoubtedly include a stop at the August 19, 1942 Memorial in Dieppe. In an old drafty theatre, a group of devoted volunteers operates the museum dedicated to Operation Jubilee. The raid involved 6,100 soldiers, most of which were Canadian. Through a collection of soldiers’ uniforms, military equipment, newspapers and photos the story of the disastrous Dieppe raid unfolds.

Operation Jubilee’s objectives were to seize a major port along the Western front for a few hours, destroy some coastal defences and gather intelligence. Ill planned and having lost the element of surprise during the pre-dawn hours, the raid left nearly 1200 Allied soldiers killed and over 2000 taken as prisoners. A 42-minute film that features first-hand accounts of the raid includes some of the most moving moments that I have ever seen on film. 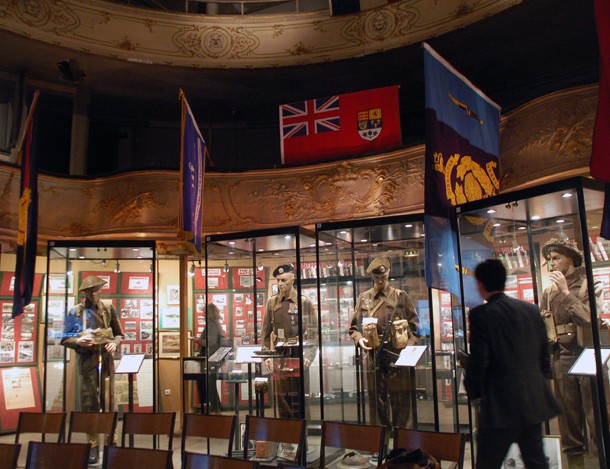 A collection of uniforms, military equipment, newspapers and photos
relay the disastrous details of the Dieppe raid
Photo Julie Kalan

The American cemetery at Colleville-sur-Mer is the final resting place for 9387 American soldiers that fell on D-Day and while liberating Normandy during the weeks that followed. Immaculately trimmed trees lining the walkway are quick to draw my attention. I am told that these conifers, cut flat on top, signify lives cut short. The walkway leads to a large semi-circular colonnade that is book ended by maps of the Normandy campaign. At the center point of the colonnade`s arc, a massive bronze statue looks out to a reflecting pool and the throng of marble grave stones standing at attention. Row on row, on row, of white crosses and Stars of David stretch out as far as the eye can see. Randomly picking a row to walk along I begin to read the inscriptions. The names and dates etched in stone sharpen my focus from the overwhelming masses to the individual losses. A stone with no name or date, bearing the words “Here rests in honored glory, a comrade in arms known but to God,” brings me to tears. Among the sea of gravestones, 307 display this heartrending phrase. 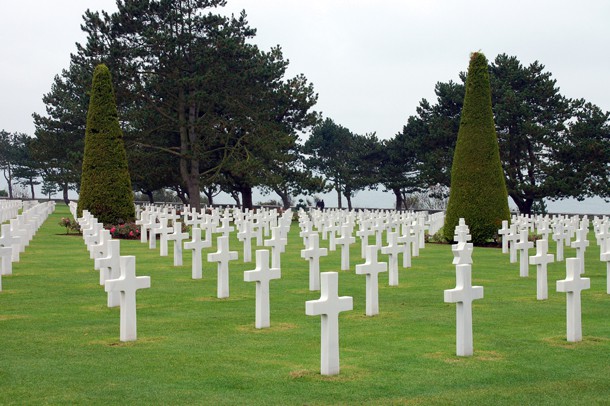 The cemetery runs alongside the edge of a bluff adjacent to the Omaha landing beach. From an overlook, the beach does not appear that far down. Walking down the stairs and along the winding path, through the lush vegetation covering the bluff, the true distance down to the beach becomes more apparent. Amidst the vegetation, the noise from the surf and people talking becomes so hushed that the sound of my own breathe fills my ears. Only the sound of a tiny rivulet rushing down the bluff momentarily brakes through the silence. The path, paved for the most part, changes to small wooden planks near the beach. Shocked by just how long it has taken me to reach the beach, I am overtaken by the seemingly impossible task of scaling the bluffs under a barrage of enemy fire.

It is difficult to comprehend, how could the site of D-Day`s bloodiest battle be so peaceful now? Dark storm clouds hover overhead and patches of tall beach grass sway in the brisk breeze coming off the English Channel. The sand has a reddish hue, as if still bearing the blood stains of the fallen. The graves lie high up on the bluff, but it is the beach that feels like hallowed ground.

To further your understanding of D-Day, the Battle of Normandy and WWII (along with WWI and the cold war) visit the Mémorial de Caen Centre for History and Peace. This vast and compelling museum uses films, photographs and artefacts to explain the realities beyond the battlefield. From Stalin’s propaganda photos to seeing the Battle of Normandy through the eyes of French civilians, I am left with a new awareness of the all encompassing effects of war.

Normandy is a wonderful add-on to any Paris visit. Traveling by train from Paris to Normandy takes about two hours. Caen and Bayeux, both reached by rail from Paris’ St. Lazare station, make great bases for touring Normandy.
There are dozens of battle sites, museums and cemeteries in Normandy. If you plan to visit a few of these, the Normandy Pass might be a good money-saving option. Inquire about it when purchasing your entry ticket at the first museum you visit.
Note: Opening schedules for all sites mentioned change depending on the time of year. Avoid any potential disappoint by checking with each site before booking your trip.

Good to Know:
Normandy is known for more than just battlefields. Impressionist masters, fresh seafood, rolling pastures dotted with cows, and Calvados (apple brandy), are just some of the wonders waiting to be explored. For information about accommodations, transport and other must-see Normandy sites: www.normandie-tourisme.fr

This year, Normandy is also hosting the FEI World Equestrian Games from August 24 to September 7, 2014. Organized every four years, this is the first time that the prestigious Equestrian Games are being held in France. Horse lovers can expect to see the world’s best in show jumping, dressage, vaulting and more.