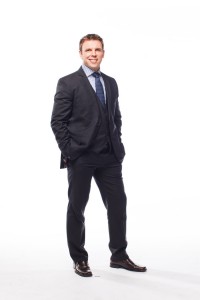 “In a way – the decision to retire because of my eye injury was made for me. I had surgery at Mass. Eye and Ear (Massachusetts Eye and Ear Infirmary) in Boston, and it didn’t work. I still had double vision in my peripheral vision, and so I couldn’t pass the physical from the head up. I could play hockey – but without insurance for head injuries. I had a wife and two daughters at the time – and it was just too much of a risk to take.”

PJ Stock, born and raised in the Montreal suburb of Dollard des Ormeaux had played hockey since he was 5, and with several years of playing and lucrative paychecks in his future – at 32 his playing career in the National Hockey League was over.“ PJ continues; “It wasn’t my terms, but I figured that I’m young enough to do something else.”

That ‘something else’ has become a broadcast career on Canada’s highest rated show – Hockey Night In Canada, viewed by more than 2.5 million Canadians every Saturday night from October into the spring and the Stanley Cup playoffs and culminating with the final championship seven game series. PJ Stock’s playing career evolved over many years, but his broadcast career developed quickly. He possesses the self-assurance to put himself into positions where he has the opportunity to perform the task at hand – in his case behind a microphone or in front of a television camera. There was also the possibility of a very public failure. There’s more than a little bit of courage required.

There are only 690 active roster players on the 32 teams in the NHL. Given the tens of thousands of children, teenagers and young adults who play hockey in Canada, the United States, Europe and Russia who all dream of playing on the gleaming white ice surfaces before 20,000-plus fans – those few players who make it to the NHL possess a level of talent and ability that the average fan cannot comprehend. It was a long way from Dollard’s North Shore league to being Wayne Gretzky’s teammate on the New York Rangers. PJ Stock did it.

“I participated in the annual player showcase called Northern Elite at John Abbott College. Scouts and coaches from schools and junior teams that come to evaluate players. Most of my buddies were going out west, but I was recruited by the Pembrooke Lumber Kings. My parents and I wanted a university scholarship in the U.S, but I eventually decided to go to the Victoriaville Tigers in the American Hockey league. My brother and I played there for two years, and then I went to St. Francis Xavier in Nova Scotia.”

After a year at St. FX, PJ signed as an undrafted free agent to the New York Rangers. Their first offer included a clause that could have sent PJ down to one of numerous minor leagues. The next time around, he asked for money to pay for college if he didn’t last two years. “At least with my signing bonus and college money I could finance my education.” PJ signed and was assigned to the Rangers’ American League farm team, the Hartford Wolf Pack before being called up. “It was a star-studded lineup in New York. I played with Wayne Gretzky, Rick Tocchet, Pat Lafontaine, Mike Richter and a bunch of future Hall of Famers. I learned a lot from those guys.”

PJ signed as a free agent with the Montreal Canadiens before being traded to Philadelphia after playing twenty games with his home town team. “We had a young team that was also decimated by injuries. One of my biggest regrets about playing for Montreal was that I don’t think I was ready mentally. It wasn’t until I was in Philadelphia that I really began to understand my role. By the time I arrived in Boston, I was in a comfortable and proud place as a hockey player.”

After two seasons with the Bruins, PJ was sent down briefly to the club’s farm team, and subsequently loaned to the Philadelphia Phantoms. “I got a stick in the eye, and while the doctors were able to fix the primary vision, they couldn’t fix the double vision in my peripheral vision. If they ever operate again, I have a good chance of losing all my vision in that eye.”

PJ and his wife Jean Marie moved back to the Montreal while he was waiting for his eye surgery. “A gentleman in Boston was anxious to buy our house – so I gave him a ridiculous price, which he accepted. I put the phone down and called out, ‘Honey – we’re movin’!”
“My brother had purchased a place in St Lazarre, so we decided to move there; and then flip it when we found out where I’d be playing next after my surgery. But I never played again and here we are.”

“I didn’t know what I was going to do, but my wife and I figured that whatever I did, it would be better with two eyes.”

“Oh yeah, I tried to see if I could still play. I was out on the rink myself, skating at taking shots at the net. One of my shots hit the net crossbar and came directly back to my face. I dropped to the ice and then realized that the puck was actually going twenty feet above my head! The puck wasn’t anywhere near me…I knew I was done.”

“Hockey is the best live game in the world.”
… PJ Stock

“I owe my broadcast career to Mitch Melnick and Wayne Bews at the TEAM 690 (then 990). I did a couple of pre-game shows, and Mitch called and asked me if I wanted to do this (broadcasting).We decided on The Stock Exchange for the show’s name.”

“I remember doing my first show. It was three hours and I used all my material in 8 minutes! It was soooooo bad. However, I figured that the only way to get experience was… to get experience. The people of Montreal were kind enough to tell me that I sucked,” says PJ with his self-deprecating humour. “Now that I’m on Hockey Night – I get it from all across Canada!”

PJ persevered, and his on-air persona improved. And then came the call from Sherali Najack. “I had a message from someone who said he was from Hockey Night in Canada and that his name was Sherali Najack. I figured that it was one of my buddies making a joke. It didn’t even sound like a real name. It was a good thing for me that he called back – because Sherali was the Executive Producer of Hockey Night in Canada! And he wanted to talk to me.”

“Sherali wanted to know about me as a person more than as a former player. He gave me the opportunity to join the Hockey Night broadcast team. I don’t think I took it as seriously as I should have at first. Here I am, hangin’ out with these Hall of Fame former players and these big time hockey guys. They put me in head first and somehow I figured it out.”

“This season we’re taking some cues from NFL broadcasts with our panel discussions before and during the game.”

Before joining the CBC team, PJ was a regular on the French-language Reseau des Sports (RDS) for that channel’s very popular hockey program L’Antichambre. “I still have to do a quick mental translation in my head, and there are times when a particular French expression just doesn’t translate literally. I’m far from perfect, but I find that the guys on the panel appreciate that I’m making the effort to be on live television speaking French.”

Perhaps because he was a known factor to the CBC, PJ was recruited to compete in the first season of Battle of The Blades, a competition that combines former hockey players with Olympic calibre figure skaters; each skating in support of a charity. “It was awful! Here I am in sequined pants at centre-ice with no boards. I never was a great skater and now they’ve got me on figure skates. I found a little corner to practice in the Pierrefonds arena. There’s no padding, and when you fall it hurts. I’m watching all these young kids and they’d get up after every fall and just keep going. So I did to.” Battle of the Blades has been a ratings success, and PJ has returned as one of three judges for the 2013/14 season.

PJ Stock and his family had hoped that hockey would enable him to obtain a college education. Instead, he overshot and became one of only 660 active roster players during the years he played in the NHL. He accepted that his eye injury meant an early end to his career, and has used his on-ice playing experience to win a job on Canada’s most popular television program; Hockey Night In Canada. It’s a remarkable and inspiring accomplishment.