Debra Arbec and Andrew Chang co-anchor CBC News: Montreal and they have established a style that is highly professional and at the same time, their nightly news program is warm and engaging. Viewers have the sense that the two broadcasters are speaking directly to them. For television programming executives, this is like catching lightning in a bottle. It’s a mixture of talent, intelligence, and the elusive ‘it’ factor – personal charisma.

Debra and Andrew have come to the television news desk at CBC from different career paths. I first met them when we did a photo session with the winners of a contest promoted on CBC Radio and Television as well as The Montrealer. I met Andrew again in January when my wife and I visited with him during CBC’s Human Library event at the Atwater Library. Debra adapts one of her Montrealer of the Week television features for a monthly column in The Montrealer titled, Debra Arbec’s Montrealer of the Month.

A native of Ottawa, Andrew attended Carleton University’s School of Journalism. “Ever since I was very young – I wanted to be a writer. As a child I wrote fiction, and my desire to be a writer pulled me towards journalism. Going into my first year – my intention was to pursue a career in print journalism.” Continuing, Andrew describes how he changed his objective, “The first year is a general introduction to journalism and its history. In second year the focus is on print, radio in the third and television in the fourth year. To my surprise – I really enjoyed creating a word picture for radio. But then I started television in fourth year and that was it for me. I realized that this was where I wanted to work.”

“Not only do you have to be coherent on TV – you have to look coherent! On radio you can read and refer to notes. On television you have to be aware of your visual presentation as well. For me – it was always a question of doing what I was best at – and I came to believe that I really wanted to do television – to be a television journalist.”

Andrew’s thousand watt smile lights up the studio set where we’re gathered for our conversation; “The addition of cameras make television much more involved. In university I’d work for hours to prepare a 90 second or 2 minute presentation.”

After graduating from Carleton, Andrew was hired by CBC as a roving reporter in Montreal. He rode busses during election campaigns and did live-from-the-scene reports for evening news broadcasts before being asked to be a co-anchor for CBC News: Montreal. It’s been a rapid progression, giving proof to the saying that “luck” occurs when preparation and talent meet opportunity.

Away from the news desk, Andrew is an outdoor sports enthusiast, a photographer, enjoys canoeing and camping, and is an accomplished musician. He competes in ‘mud races’, a team sport that has racers face water, fire, ice and even electricity as they make their way throughout the course. “We often start by having to jump into a dumpster-sized container filled with cold water and ice. We swim underwater to pass beneath a barrier and then begin the race completely soaked and very, very cold” states the slim broadcaster, who shows little evidence of any extra body insulation. “We have to crawl through the mud under barbed wire. There are lots of sharp sticks and stones in the mud – and we generally get cuts and abrasions on our knees.” Continuing, Andrew says: “It’s a combination of pushing yourself both physically and mentally, and at the same time encouraging your team mates.”

Andrew also has a love of music that has led him to play a variety of instruments, including piano, trombone, trumpet, euphonium, alto saxophone, and both acoustic and electric guitar. “I played trombone in the high school concert band, and only took up guitar when I was in university. I played it so much that I’d sometimes fall asleep with the guitar on top of me.”

In the eight years that he has worked at CBC Montreal, Andrew has covered news stories and elections throughout Quebec and greater Montreal. He recently spent time at CBC headquarters in Toronto working for The National, the network’s nightly news broadcast. Andrew hosted two broadcasts of The National, sitting in for Peter Mansbridge. It was exciting and at the same time daunting. “Someone said to me just minutes before going on air; ‘This is the Stanley Cup of journalism – make it good!’ Once I started into the newscast, I was fine. But I do confess to being apprehensive before we started.”

Debra Arbec grew up in Rawdon, after her parents moved there when she was just six.“We had quite a nice life there. The town was a lot smaller than it is now. It was rural. So rural, I had a horse. It seemed like everyone did at the time.”

After graduating from the Concordia Broadcast Journalism Program, Debra began working at CJAD where she obtained her ‘real life’ training from the late Gord Sinclair. “I was very fortunate to work with Gord and the late George Balcan. “

Television beckoned, and Debra did on-camera work for The Weather Network before she was hired by CTV in 1997 to anchor the weekend evening news. Shortly thereafter Debra moved to anchor the nightly news at 11:30 on weeknights. 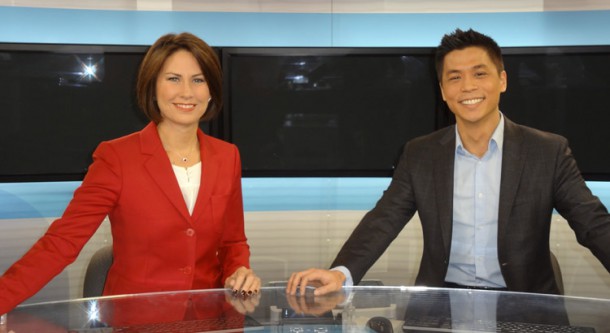 Debra jumped at the opportunity to assume the responsibility the co-anchor’s position with the CBC evening news program. “It’s been really good both intellectually and physically to be doing this 90 minute show five nights a week.”

Debra has always been a community-minded person, and she has a weekly segment called Montreal of the Week. She presents ordinary Montrealers doing extraordinary things to help out their fellow citizens. “It’s been a great experience – being able to be a part of the community and introducing Montrealers to these people. Most of them don’t consider that they’re doing anything all that special, when in fact they are reaching out and touching people in a very personal and meaningful way.”

Debra has always been active, but 15 years ago decided to take her personal fitness to another level. “I’m goal oriented, and thought I’d like to complete a marathon. My first race was a half-marathon, and I enjoyed it so much that I stepped up to a full marathon.” Debra runs an average of two marathons per year, training and running five days a week – picking up the distance and intensity as a race date approaches. “I like to peak at about 30 kilometres shortly before the race.” She speaks lightly of the extra 12 kilometres she runs to complete an actual race that most of us would consider a lifetime achievement. With a chuckle, Debra muses: “All it means is that I get an hour less sleep –It’s a great way to work out problems and relax my mind.”

As the co-anchors of CBC News: Montreal, Andrew and Debra have been in the forefront of the broadcaster’s landmark Living English series, based on an exclusive CBC poll conducted by EKOS Research. The survey asked 1001 Quebec Anglophones – asking a series of questions ranging from politics, access to social services education and how Anglos feel about their future in Quebec. Andrew notes that there have been some surprising results that are at times unsettling. “Fully 27% of Anglos don’t feel welcome. I was surprised at how high that number is.” Statistics became reality when Andrew travelled to Lac Brome, where the town faces the loss of its bilingual status under the proposed Parti Quebecois Bill 14. “The people we interviewed put a face to the EKOS numbers. They are very worried that they may not have a future in the town where they have lived for generations.”

Andrew Chang and Debra Arbec have covered elections, natural disasters, demonstrations, riots and the shooting at the PQ’s minority election victory. The impact of the CBC/EKOS poll is so big that they are now in the position of being part of the very news story that they are covering, with Jean-François Lisée saying it’s a benchmark for the PQ government.

Says Andrew; “I hope that when people see all the effort we put into our broadcasts, that we come across as people who care about our profession and the community we serve. We’re a newscast that people can come to and know that we have done our research to find the real story.” Debra: “We’ve built an incredible team – I’m just really happy to be here.”