Catherine followed a circuitous but rapid path to her current roles of Weather Specialist and acting host of Our Montreal. Her natural effervescence and self-assurance have made her a ‘natural’ in front of the camera, and audiences enjoy the easy banter she shares with news anchor Debra Arbec.

Catherine Verdon-Diamond has taken a circuitous route to her current position of Weather Specialist on CBC television news, and host of Our Montreal. Her CBC career started as an Executive Assistant, followed by some on-air work. She also worked at Citytv before returning to CBC as an on-air personality. While at Citytv, Catherine also did contract work as an event host. She hasn’t followed the normal route through journalism school to become an on-air broadcast personality. It was during our conversation I learned that Catherine has an unusual background and that she’s someone who follows her dreams with determination and enthusiasm.

“When I get a message from a viewer, a guest, or a fan of my work who says how happy they are to see a Black woman on their screen representing them… it makes it all worthwhile”

Catherine was adopted by a white Francophone family when she was just seven months old. Her dad worked for Pratt & Whitney on the South Shore and the family lived in St. Hubert. “My dad worried that my birth mother might take me back, and so my parents adopted another child from Haiti who became my sister. Christine had many health issues when she arrived, and it took a while for her to regain her health.” 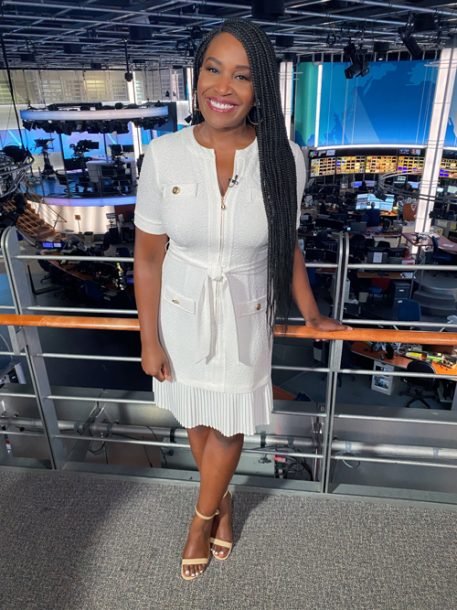 “I felt different when I went to school where most students were white. It was the other students that made me feel different. I had difficulties fitting in.”

Her father’s work in the aerospace industry took the family to Egypt for four years, followed by another four years in Israel. “My parents loved Israel, and wanted to stay there; but as teenagers, my sister and I were anxious to come back to Montreal to finish high school and then go onto CEGEP. In 1994 our parents purchased a condo for us in Griffintown. My sister Christine had graduated from high school in Israel and was ready for CEGEP. I finished my last year of high school at Westmount High and then I enrolled in Social Sciences and at Dawson.”

Catherine grew up quickly when she was just twenty years old. “My sister had Epilepsy, and she had a seizure in our apartment and died in her sleep when she was just twenty-one. I had to deal with the police and contact our parents who were in still living in Israel.” Christine’s untimely passing was a blow to Catherine, and decades later, her emotions still rise to the surface.

“I always wanted to be in the entertainment business, and it was while I was working at a production company that I sent an application in to CBC.” Months went by without a response. Catherine had all but forgotten about her application when she received a call from a person in the Human Resources Department, saying; ‘Catherine, I think you’d be great for CBC. We have a maternity leave Executive Assistant position open for a year, and during that time we’ll figure out for what comes next here.’ Catherine knew that she wanted to move on from the production company, so the prospect of a one-year contract did not deter her from accepting the job.

Catherine became the Executive Assistant for Shelagh Kinch. “I was excited about the new situation, and it turned out that Shelagh and I were a great team and I thoroughly enjoyed working with her.”

For a lark, Catherine and a friend made a video in one of the public washrooms at CBC. “It came to Shelagh’s attention, and she said; ‘I love it, and we want you to replace Sabrina Marandola on weather while she’s on holiday.’ Since then – I’ve been on-air ever since.” 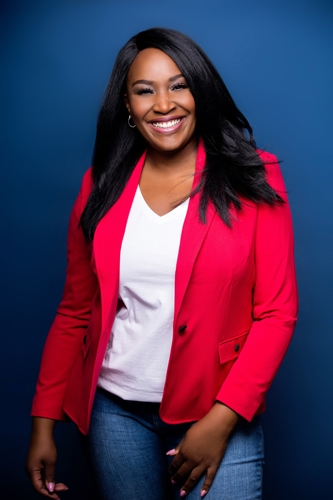 The launch of Citytv in 2013 opened an opportunity for more consistent on-air work for Catherine, and she worked on Breakfast Television from 2013 until the program was cancelled in 2019. Catherine was unemployed and thought the door to CBC had been closed when she left for Citytv. A few days went by, and to her happy surprise, Catherine received a call from CBC… “Can we talk?” Catherine was back on the air by December 2019 as a back-up Weather Presenter, soon to become full time.

In addition to her daily appearances on the CBC News, Catherine is hosting Our Montreal which is aired on Saturday, Sunday and Mondays. “I’m enjoying the interviews, and my skills are improving.”

Catherine’s memories as a young girl being made to feel different have given her a feeling of responsibility as she continues to develop her on-air broadcast career.  She states; “In an industry where people who look like me have fought long and hard to be seen and heard, I do not take for granted the opportunities that have been presented to me.”

“It is an honour for me to be seen in my community as a beacon of hope…a Black woman on television who has something to say and has the platform to do it on.”

“Being on television every day can be emotionally taxing, but when I get a message from a viewer, a guest, or a fan of my work, who says how happy they are to see a Black woman on their screen representing them…it makes it all worthwhile. If I can inspire young BIPOC women to be seen and heard as I am, then I am doing something right. And although I am seeing more and more Black women in front of the camera, I want to see them behind as well. I want to see Black women (and men), directors, producers, camera operators, etc. Yes, there has been change, but there is still a lot of room for improvement.”

Catherine Verdon-Diamond can be seen daily on CBC News Montreal at 6 and weekly on Our Montreal at noon on Saturday, with re-broadcasts on Sunday and Monday.