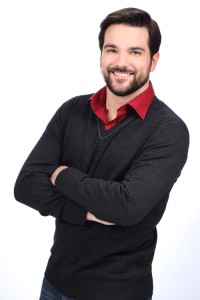 Doug Gelevan reports on Sports on Daybreak at 88.5 FM and during the evening on CBC News

Doug Gelevan, Sonali Karnick and Andrew Chang are part of the CBC Olympic broadcast team. Apart from Toronto, the Montreal contingent is the largest group from any CBC station in the network – a compliment to the local journalists who have been selected to be part of Canada’s daily television coverage of what is the world’s biggest sporting event. For the athletes, it is both an honour and recognition of their ability to win qualifying competitions to make it to the National Olympic Team. For journalists, it is a similar honour and recognition of their individual body of work. They too have had to qualify to tell the stories of the Sochi Olympics, making their applications to the CBC executives and producers who selected the television and radio broadcast journalists.
I had a conversation recently with Doug, Sonali and Andrew to discuss their Olympic assignments.

Sonali Karnick is the Host of All In A Weekend on CBC Radio One and has recently begun hosting Our Montreal on CBC-TV. She has been with CBC since 2000, starting off behind the scene and earned the job reporting on Sports for Daybreak. Sonali has experience in reporting on major sports events; having covered the Stanley Cup Playoffs and Women’s World Soccer.

“When you grow up watching the Olympics, it’s almost like walking on air when you’re selected to cover the Olympics, which I’ll be doing for both television and radio,” notes Sonali. “It’s another kind of experience for us, to be part of the CBC broadcast team covering the world’s biggest sporting event. It’s a huge pat on the back!” 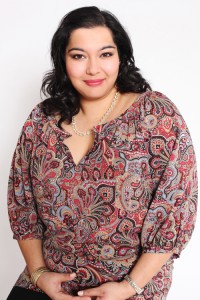 Sonali Karnick, Host of All On A Weekend on CBC Radio and Our Montreal on CBC-TV will be reporting from the ice rinks and following human interest stories throughout the site

Sonali will be covering skating events, in addition to covering the human-interest stories as they emerge during the course of the games. “I’m a huge figure skating fan, and it will be very interesting to see how Patrick Chan does in the competition. He’s pushing the limits of what an athlete can do on figure skates. I’ll also be covering the speed skating semi-finals in addition to figure skating. For the human interest stories – you go where the story is – so I’ll be moving around the site. ”

Andrew Chang adds; “So many of the winter athletes are from Quebec, and we already know a lot about their careers.” For several years Andrew travelled to the towns and villages of Quebec, producing and filming short news items and longer reports about life and news events in Quebec. He has first-hand knowledge of the hometowns and communities of many of Canada’s winter athletes.

Andrew Chang is the Co-Host of CBC News: Montreal, and he will be hosting the anchor desk with Hockey Night In Canada broadcaster Andi Petrillo. They will broadcast live from midnight to 6am; a time in Sochi that will have Andrew and Andi reporting on events as they are happening.

Andrew has provided live coverage major events, including the attempted assassination of Premier-elect Pauline Marois during the last Quebec provincial election. He has also replaced the vacationing Peter Mansbridge as the anchor on The National on the CBC Canada-wide network.

As a news anchor, Andrew brings an additional perspective to the Games. “These Games are not just about the sports. There are important news stories that already are linked to the Winter Olympics. Will there be an effect resulting from the Russian anti-gay legislation? Many athletes are apparently going to wear rainbow pins in protest. The United States is sending two openly gay former athletes as President Obama’s Official Representatives; namely Billie Jean King and Brian Boitano.” 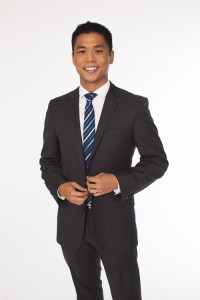 Andrew Chang is the co-anchor of CBC News – Montreal and an avid snowboarder and outdoor enthusiast. He will be a co-anchor of at Olympic desk live from Sochi

“This is also the most expensive Olympic Games ever,” Andrew continues; “and that is also part of the story. Several of the sites were still not ready in mid-December, and there is a problem with the ski jump in that it is sinking. The organizers assure us that everything will be ready, but we also have very powerful athletic organizations that are concerned for the safety of the athletes and the integrity of their sports.” There’s a high potential for hard news stories during the world’s largest sporting event.

Doug Gelevan, a native of Halifax has been with CBC since 2010, and has already won a National award for a radio sports feature. He shares the sports reporting duties with Andie Bennett, alternating between DayBreak on Radio One and on the evening television program, CBC News: Montreal.

“I was involved in sports as a kid, and my friends and I dreamed of going to the Olympics. As we grew older, the list of potential events that we could compete in grew smaller and smaller. So to be going to the Winter Olympics as a journalist is a fulfillment of that dream – just in a different role. Like the athletes who had to qualify to represent Canada, we too had to qualify to be part of the CBC/Radio-Canada Olympic team. It’s a star-studded list of broadcasters – and it’s an honour to be part of that group. Without doubt – working at the Olympics is the biggest moment of my life.”
Doug will be located at the Mountain Cluster, where the alpine competitions will take place. “I’ll be in the mountain mix zone – where the athletes speak to the media. I already know the background of many of our skiers and sliders as part of my job reporting on Sports for radio and TV. Actually, one of my friends has qualified for the Canadian bobsled team.”

Canada has traditionally done very well in Olympic alpine events, and just after Christmas Quebecer Eric Guay won a bronze medal in a World Cup downhill event, and his 21 World Cup podium finishes establish a new record set by Steve Podborsky – one of the original Crazy Canucks from the 1980s. “There is certainly pressure on our skiers to do well, and I’m preparing my background material on all of them.”

Three young CBC Radio and Television personalities are each realizing an Olympic dream – having qualified and made the CBC national broadcast team to cover the Sochi Winter Olympic Games. It’s the world’s biggest and best sporting competition. You’ll be able to see and hear Doug Gelevan, Sonali Karnick and Andrew Chang make their Olympic debuts beginning on February 2.