VIKINGS – DRAGONS OF THE NORTHERN SEAS

Exclusively, and for the first time in Quebec, the exhibition showcases the National Museum of Denmark’s magnificent Viking collection—one of the world’s finest! An exceptionally diverse selection of 650 authentic objects provides a unique and innovative look at the legendary and fascinating culture of the people we call the “Vikings.”

From origins to the end of days: the story of the Vikings told through four captivating narratives

Taking an original approach that weaves together myth and reality, the exhibition offers an in-depth immersion into the real and imaginary world of the Vikings, tracing the history of this legendary people through four great tales: origins, life, travel, and the end of days. Themes through which it addresses the lifestyle, values, and practices of early Scandinavian society; navigation and war; and the mythology and beliefs that played a predominant role in Viking daily life. The exhibition also explores Nordic heritage in today’s popular culture. 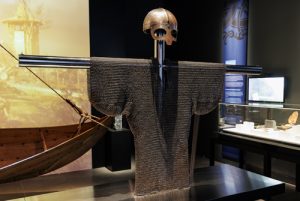 Peasants, traders, navigators, and warriors—the Vikings left their mark on the world between 793 and 1066 CE. These skilled navigators sailed the seas and earned a reputation as fearsome warriors. They were also great traders whose influence extended to the borders of Europe. Their art, inspired by nature and myths, produced several objects adorned with intertwined animals—like birds, wolves, snakes, and dragons—, creating patterns that are typical of the Viking era. Unrivalled at gold and silver work, and renowned as exceptional blacksmiths, they left behind many exemplary pieces, demonstrating their tremendous skill. The 650 objects and artefacts on display include jewelry and finery of great quality, as well as everyday tools and weaponry—authentic evidence of Viking artisan know-how. Some fifty of these objects are being presented in North America for the very first time.

“Enhanced with an original design, Pointe-à-Callière’s presentation will certainly be the most exhaustive and spectacular Viking exhibition ever presented in North America. The quality and diversity of the pieces from the National Museum of Denmark, which holds one of the most beautiful Viking collections in the world, paint an eloquent and most complete portrait of this civilization. We are delighted to offer our visitors an experience of this magnitude.” – Anne Élisabeth Thibault, Executive Director of Pointe-à-Callière

An immersive experience in the world of the Vikings

Following the scald Thorvald (a Scandinavian poet) on an enthralling path through the exhibition, visitors will learn about the myths that populated the Vikings’ imagination and punctuated their lives, while the objects on display speak of the people who once used them. The four tales are an invitation to travel, transporting visitors from one world to another against a visual and aural backdrop that is both immersive and poetic. 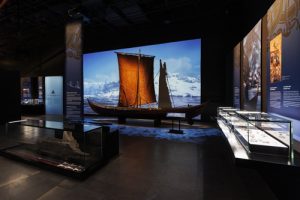 The tale of origins speaks of the profuse Viking cosmogony—nine worlds supported by the tree Yggdrasil. In the centre is Midgard, where humans reign, while the top is where the god Odin presides in his vast palace, Valhalla. With the tale of life, visitors will learn about the Vikings’ daily lives—exploring peoples’ homes, occupations, leisure pursuits, social organization, the economy, and politics. The tale of travel tells of great expeditions, conquests through wars and raids, as well as trade routes and the exploration of territories. The Vikings’ major strength was navigation, which allowed them to sail the seas and even reach the shores of North America. Lastly, the tale of end of days addresses funeral rites, beliefs relating to the beyond, and the end of the Viking era.

Each tale is enhanced in its own strikingly artistic setting, with a deep sense of solemnity running throughout: a Jelling stone here, a reconstruction of a Viking sailing vessel there. All of it set against an enveloping backdrop, punctuated with images from the Ubisoft Montréal game @Assassin’s Creed Valhalla, literally bringing the various tales to life.

“While the tales take your imagination on a journey, allowing it to roam, the immersion in the museum setting supports it, accurately reflecting Viking culture through the colours, sounds, and many objects that were part of Viking daily life. Ubisoft Montréal’s renewed collaboration with Pointe-à-Callière demonstrates how Montréal’s cultural savoir-faire can serve to explore history.” – Maxime Durand, World Design Director, Ubisoft Montréal

A Scandinavian presence in Canada

All along its impressive historical path, VIKINGS – Dragons of the Northern Seas offers new perspectives on Viking society and presents the most up-to-date scientific knowledge. Through a generous loan from the Canadian Museum of History and The Rooms, Newfoundland and Labrador, the exhibition notably features objects from the L’Anse aux Meadows site in Newfoundland, the first known evidence of a Viking presence on the continent, recently dated to the year 1021.

Forming a bridge between the past and the present, a tactile screen at the end of the exhibition examines Scandinavian cultural heritage in Canada, inviting visitors to meet Montreal communities with origins in Norway, Denmark, Sweden, and Finland, and to explore the festivals and events that carry on their traditions.