He was reading the newspaper on a Sunday morning when it happened: a crushing pain in his chest. Realizing something was seriously wrong, he called his wife into the room.

“I told my wife not to be afraid, but to please call Urgence Santé,” says Howard.

The paramedics arrived, and they quickly began to run tests. A physician himself, Howard read the cardiogram. It confirmed his fears: he was having a heart attack.

“I was in the back of the ambulance and in immense pain. I closed my eyes, knowing that I would be in the emergency room any minute. When I opened my eyes again, it was two weeks later and I was in the MUHC’s ICU,” says Howard.

Howard’s heart attack left him in critical condition. He spent over a month in the ICU on a ventilator and hooked up to an ECMO machine, which oxygenates the blood. Though he remembers very little, he does recall the excellent care he received.

“The doctors and nurses were just outstanding. When I was at my worst, they were gentle, compassionate, and always there to help. They helped me pull through,” says Howard. 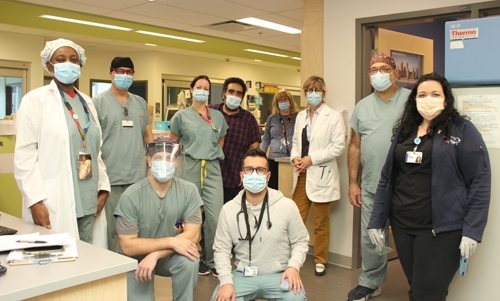 A stay in the ICU is not easy. Howard was sedated and frequently disoriented. He had little concept of time passing. Whenever he was awake, however, his health care team was there to reassure him.

“The nurses were always there to orient me, tell me where I was and give me the date,” says Howard.

After 35 days, Howard was released from the ICU. Though he was able to go home, he wasn’t out of the woods. His heart was severely damaged, and his doctors determined that he would need a heart transplant.

Nine months after his heart attack, Howard had a mechanical heart installed. This device, which is surgically implanted into the heart, is essentially a pump, helping Howard’s heart move blood around his body. The device keeps his heart beating while he waits for a transplant. Following the procedure, he spent two more days in the ICU.

“Once again, my health care team was outstanding—my nurses, my cardiac surgeon, everyone,” says Howard.

Today, Howard is still waiting for his heart transplant. Though he has returned to work part time, his life is far from normal. He carries battery packs everywhere he goes to keep his mechanical heart pumping. Walking even a block leaves him short of breath. Despite this, he took two of the most important walks of his life last year.

“I walked both my daughters down the aisle at their weddings,” says Howard. “I was grateful to be here to experience those important moments.”

Without the support of the ICU at the McGill University Health Centre (MUHC), Howard would not be here to experience milestones in his children’s lives.

“I am grateful that life goes on. I still get to hug my wife, to see my kids,” says Howard.

The ICU is the last resort in life-or-death situations. Its highly-trained staff care for critically ill patients who require significant medical interventions to survive. Often, patients require a ventilator to help them breathe, among other lifesaving machines.

Since the COVID-19 pandemic began, the MUHC’s ICU has been stretched thin. Its staff were on the frontlines at the very beginning, when we had little knowledge or defense against the virus. They remain there today, over two years or 800 days later. In that time, there have been only 35 days without a critically-ill COVID-19 patient in the ICU. They are exhausted, but they have never wavered from their commitment to saving lives.

“In the ICU, it’s common for patients to die. It’s par for the course. What really affected us during COVID-19 was seeing patients die without their families beside them. Because of the restrictions, final good-byes were said behind glass. It was heartbreaking to watch,” says Rita Larotonda, a Nurse Manager and 20-year veteran of the MUHC’s ICU.

Howard’s stay at the ICU made him realize how little fundraising is done for this critical unit. Many people are so ill that they don’t remember their stay, so few think to support it. To show his gratitude, Howard is raising funds with the MUHC Foundation to support the physical and mental well-being of staff, and critical training for life and death situations. You can help him ensure the ICU’s expert staff have everything they need to save lives. To learn more and to donate to his fundraising page, visit https://muhcf.akaraisin.com/ui/pledge/p/DrHGoldsteinICUMUHC