Experience culture, outdoor adventure and bucket-list landscapes on this cruise of  Scandinavia and the Baltic 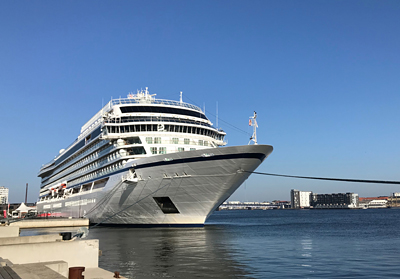 The Viking Star can access most ports which makes it easy to explore destinations independently
Photo: Francisco Sanchez

It’s early afternoon when our fishing boat The RAPP departs from the harbour of Stavenger, Norway. Soon we’ve left the 17th century wood-framed shops of Old Town behind. A gunmetal sky looms on the horizon, icy water splashes our faces and sea birds soar overhead.

Welcome to deep-water fjord fishing in Norway. Norwegians live and breathe the sea. Here, fishing is more than just catching fish. It’s one of the most cherished traditions in Norwegian culture. “The deep, cold waters of southwestern Norway are rich in marine life,” explains Skipper Ulf Torressen as we chug through the silent fjords. He tells us that beneath our boat, at a depth of between 40-80 metres, the waters teem with torsk (cod), flyndre (flounder), hyse (haddock), Atlantic mackerel and more.

We set our rods, sit back and get ready to wait. After all, fishing in most parts of the world is all about patience. Yet within minutes we’re on our feet reeling in strings of mackerel. I’ve got three fish on my line and everyone in our group is hauling in fish as fast as they can.

It’s all part of a traditional fjord fishing excursion with Viking Ocean Cruises on the Viking Star, a luxury cruise ship. This adventure is just one of many Nordic traditions we’ll experience on this cruise. 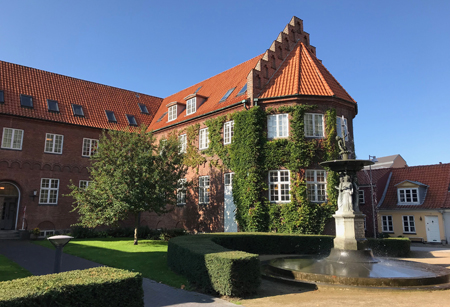 The historic town of Arlborg is one of the charming stops on the Viking Homelands Cruise
Photo: Francisco Sanchez

My itinerary is part of a 15-day Viking Homelands cruise through the waters of Scandinavia and the Baltic visiting eight countries including Berlin (Germany), St. Petersburg (Russia), Bergen (Norway), Copenhagen (Denmark), Tallin, Gdansk, Helsinki and more. It’s one of several ocean cruise itineraries offered by Viking Ocean Cruises, a division of Viking Cruises.

Our 930-passenger ship, the Viking Star, is the first of Viking’s ocean cruise ships. Launched in 2015, it was followed by five more sister ships, including most recently the Viking Jupiter in 2019. Four more ships are scheduled to launch by 2023. Itineraries for their river and ocean cruises include sailings to Scandinavia and Northern Europe, the Mediterranean, the Caribbean, Australia and New Zealand, Asia, Alaska, North and South America, and Africa. 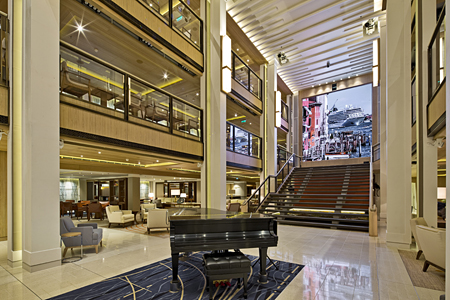 The elegant atrium on Viking ocean ships
is a hub of onboard activity
Photo: Viking Cruises

Classified as small ships, the fleet’s ocean vessels allow direct access into most ports, which means easy embarkation and disembarkation. Viking’s ocean itineraries are also designed to maximize the amount of time travelers spend in port, which appeals to travellers who want to immerse themselves in local culture and experience as much as they can at each destination.

That’s what we did in Copenhagen. There, we began our morning in the Danish capital with a walking tour introducing passengers to sights such as the iconic Little Mermaid bronze statue and a range of landmarks, buildings and gardens from a history dating back to 1043. Participants learned of Denmark’s occupation during WWII and the resistance movement that helped protect much of the country’s Jewish population. 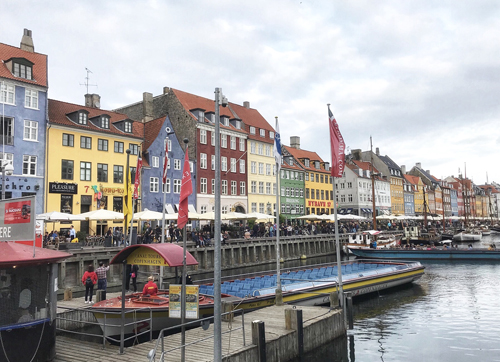 Explore cities such as Copenhagen on the
Viking Homelands Cruise
Photo: Francisco Sanchez

In the afternoon, during our Charming Coastal Copenhagen excursion, we headed southeast beyond the city limits to the windswept village of Dragør. Founded in the 12th century as a port for the herring fishing fleet and sailing ships, its harbour and narrow cobblestone streets lined with homes topped with thatched roofs seem unchanged with time. We returned in time to hop on the complimentary Viking shuttle bus into Copenhagen to enjoy time in the cafes, shops and boutiques later that afternoon.

Viking history loomed large at the next port of call, Alborg, Denmark. Founded by Vikings in the late 900s and set in picturesque Limfjord at its narrowest point, our escorted walking tour introduced us to the Old Town’s half-timbered mansions, churches such as Vor Frue Kirke dating to 1100 and a wealth of well-preserved Renaissance architecture.

As with other ports of call, there was a generous amount of independent time giving us the opportunity to sample aquavit, the potent local aperitif and explore an underground Franciscan church, holding the bones of Alborg citizens buried centuries past.

Ship Life Aboard the Viking Star 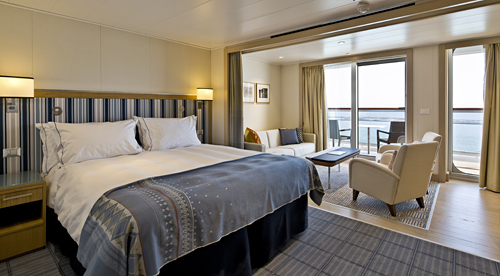 Staterooms are spacious and bright, like this Penthouse Junior Suite Photo: Viking Cruises

Life aboard the Viking Star is filled with light. All curves, blond wood and natural materials, the soaring modern design of the Viking Star is one of understated elegance. Each stateroom features a private veranda spacious enough to enjoy leisurely morning coffee or evening cocktails.

Dining aboard the Viking Star is a memorable experience. With six restaurants and six bars to choose from, options include a wide selection of cuisine from Italian fare at Manfredi’s to a full breakfast buffet at the World Cafe. Beer, wine, juice and soft drinks are available during lunch and dinner at no extra charge. 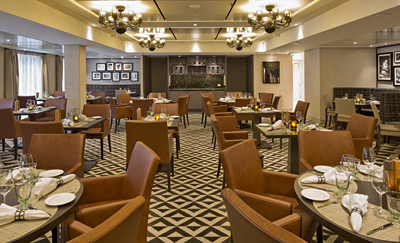 One of the hidden gems for lovers of local cuisine is Mamsen’s Cafe located within the Explorer’s Lounge. Named in honor of Viking founder Torstein Hagen’s mother, this take-out eatery features a variety of Scandinavian dishes such as open-face sandwiches, cheeses and waffles.

For those who prefer to wrap up their full days of explorations in a leisurely way, 24-hour in-room dining is available and features destination-inspired dishes such as Norwegian gravlax with sour cream and potato salad as well as hearty meals such as an Angus New York Strip Steak, grilled to perfection with a classic Caesar salad. 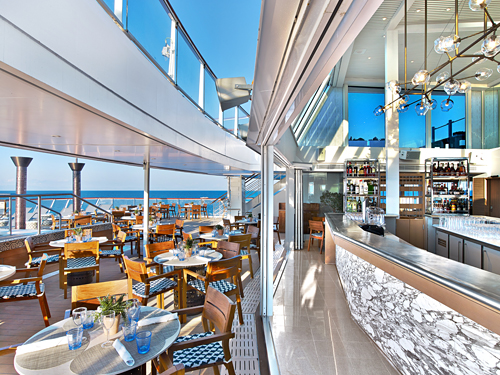 Onboard activities include performances of concert piano, dance shows and other entertainment within the cabaret-style theatre as well as live classical music in the Atrium, a sports deck with gold and shuffleboard plus a well-equipped fitness centre, infinity pool and swimming pool deck with retractable roof. An onboard historian provides welcome insights into Nordic history as well as upcoming ports of call.

A tempting array of spa treatments await within the LiV Nordic spa. The Nordic bathing ritual concept claims that alternating hot and cold hydrotherapy stimulates the immune system, offering a boost of wellness. 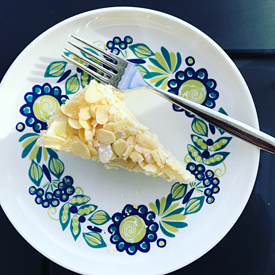 More Nordic heritage awaits within the Viking Star’s onboard museum featuring artifacts, clothing from the Viking era and a video explain the background of The Bayeux Tapestry, a work of incredible embroidery describing the Norman invasion of England. Passengers tempted to think they may have Viking ancestry can do a quick assessment without a DNA test.

At the heart of our Viking Homelands itinerary is the opportunity to “go-a-viking” on land and sea. Historically, the word “viking” was a verb meaning “to go on a waterborne adventure” and Norse farmers in Norway, Sweden and Denmark would go trading, exploring and raiding after their crops were planted. 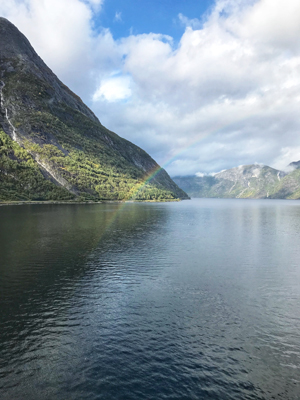 It’s easy to capture that sense of adventure as we glide through stunning Hardangerfjord of Norway and witness a magnificent rainbow arch across the charming hamlet of Eidfjorden. As we explore this gateway to the Hardangervidda, Europe’s largest plateau, we traverse canyons, marvel at mighty Vøringsfossen waterfall and gawk at quaint homes topped with grass trimmed by goats.

While picturesque, it’s a primordial landscape of epic proportions. As I hike up a hilly slope to capture a view of the lichen dotted valley, I’m met with a blast of icy snow and sleet.

It’s a reminder that if seawater runs in the veins of every Norwegian, expecting formidable weather is also part of what it means to “go-a-viking.”