There is no question that when it comes to restaurants, Tom Bountis has the magic touch

Bountis was the founder and creator of the Allô! Mon Coco chain, which he sold to the MTY Group in 2019. He is also co-owner of Mr. Puffs and Shawarmaz. A few years back Bountis was in Cornwall to open a new Mr. Puffs when he came across a spot called Billy K’s, specializing in burgers, wraps and other comfort food. It turned out the owner was looking to sell. He and his sister Fotini and partners Melih Batri and John Sanoudakis decided to purchase the brand.

The first Billy K’s in Quebec opened on Boulevard de Gare in Vaudreuil in March. That has since been followed by a May debut on Lacordaire in St. Leonard. Laval is slated to join the group by the end of the year. 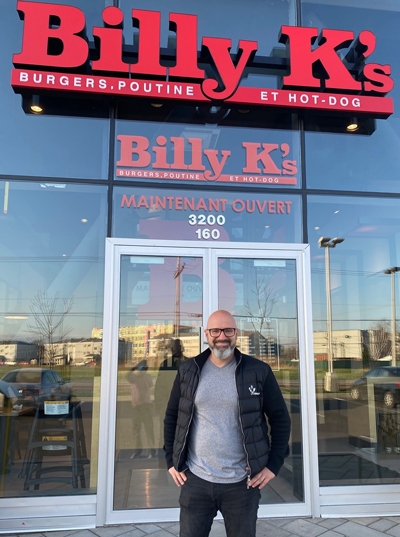 Bountis was hooked by the restaurant business at a young age. He did everything from busboy, dishwasher, waiter and host and until he bought the then only Allô! Mon Coco locale in St. Dorothée, Laval. By the time he sold the breakfast specialty chain, there were 41 franchises. He runs Mr. Puffs, which serves up traditional Greek “donut holes,” or loukoumades, with Dimitri Georgoulas, and Dimitri Nikolidakis. That brand has 43 franchises, including one in Greece and another in Orlando, Florida. NDG is next. Shawarmaz has locales in Vaudreuil, Laval and downtown. His partners there are Bassel, Danny and Hanni Zein.

I met up with Bountis at Billy K’s in Vaudreuil. He brought his wife Maria and kids Peter Thomas, Maïa Sofia and Samuel, who love the food. “After purchasing the Cornwall location, we started to rebrand and give the menu a fresh look;” Bountis said.

I sampled the Billy Burger, containing two thin burgers made from 100 percent Triple A Angus beef and a side order of fries. “We do not cut corners,” said Bountis. “The fries are made on site, from freshly cut potatoes.”

I must say, the hamburger was good indeed and I could not resist the temptation to try a grilled cheese sandwich. They come with different options and I chose Philly Steak. Wow – was that a delicious experience.

For lunch the next day, I took home their thinly cut chicken burger. Also freshly made, I popped it into the microwave, and it tasted like I just got it over the counter. I also chose a fry and meat sauce side, which was a meal unto itself. The smoked meat burger will be on my list next time.

“I love taking brands when they are young and nurturing them,” said Bountis. “Allô! Mon Coco has the best breakfast concept anywhere. It was so ahead of its time. I am very proud of that.”

For more details about Billy K’s go to https://www.billyks.com/en/menu.