Carifiesta Montreal is an annual summer celebration in Montreal. It is all about embracing and celebrating Caribbean culture.

Carifiesta is one of Montreal’s most colourful and exciting parades, featuring everything from steel-pan bands to participants dressed in costumes made of colourful feathers and bouncing fibreglass rods.

Carifiesta is a tradition born of slavery in Trinidad and Tobago, when French colonial masters hosted masquerade balls three days before Ash Wednesday. Slaves got a day off and mimicked their masters at their own parties, a tradition that morphed into Trinidad’s famed Carnival.

That tradition migrated north to such cities as Miami, New York, Toronto and Montreal. Montreal’s competing floats, known as “mas bands,” all “play mas” (as in masquerade). Participants in “mas camps” throughout the city “build mas” (stitch costumes and build floats). 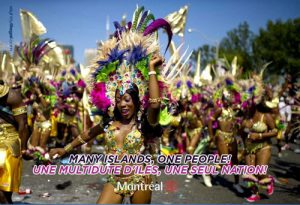 The Parade features groups representing all the different countries in the Caribbean. The streets of Montreal will be full of beautiful costumes, steelpan performances and vibrant personalities which take part in the procession.

Mas Bands are known as the heart and soul of this carnival parade. They are large organizations of people who will all buy a costume from the same designer and parade together. Mas is short for masquerade. Every year the leaders of the mas bands will select a theme and then design all their costumes, floats and music around this theme. The costumes are such intricate pieces of work that they take all year to construct. The costumes seen in the Carifiesta Parade show a lot of skin and feature bright colours. They also have intricate design features with feathers, beading sequins and more. Most costumes also feature exotic headdresses. Mas Bands are always followed by trucks that carry DJ’s or sound systems follow the groups pumping out the soca or calypso music for the mas bands to dance to.

Carifiesta is an opportunity to recognize the various Caribbean cultures which contribute to the multi-faceted and multi-cultural nature of Montreal.

Saturday, July 2, 2022 from 12pm to 4pm
Along Ste. Catherine Street, starting at Guy and ending at Phillips Square