The glowing articles started hitting my desk last fall. There was this new stunning 109 room and suite hotel property in Halifax called The Muir. The accompanying photographs created a double take. This is Halifax? Not possible! Then I saw an announcement that Chef Anthony Walsh, the Chief Culinary Executive of Oliver and Bonacini was going to be leading the cuisine of up to thirteen different restaurants that would form part of the Queen’s Marque district (a multi-use real estate complex in which the Muir is the anchor). I asked myself; what exactly is going on in that city? I had to see for myself. 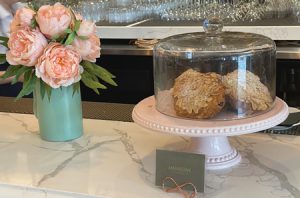 It had been years since I had been to Halifax, but from the moment I arrived, everyone kept telling me that it was now the fastest growing city in the country. In fact, according to the latest census, downtown Halifax grew at a pace of 26.1 per cent (since 2016) beating out Montreal which grew 24.20 per cent, Calgary at 21 per cent and even Toronto at 16.10 per cent. It appears homeowners from various parts of Canada are cashing in on their skyrocketing real estate prices and finding real value in Nova Scotia. Therefore, the timing for Muir and the Queen’s Marque, district could not be any better.

Arriving at Muir does feel like you are entering the city’s new crown jewel of a hotel. Built on the site of a former parking lot, the architectural design is decidedly modern yet makes a territorial statement that is distinctly Nova Scotian. With a stated guiding principle of “Born of this place”, the entrance is on Lower Water Street but both the hotel’s and Queen’s Marque district’s focus are on the harbourfront. Muir is Scottish Gaelic for “sea” and its presence is felt in the property’s views, the seafood- forward cuisine at the in-house restaurant, Drift, and the original artwork that populates each floor and guest room. Even the materials used for construction have nods towards the province’s history and geology such as the Muntz copper metal (a component of Nova Scotian shipbuilding designed to weather harsh seawater conditions), sandstone mined from local quarries and the use of more traditional granite. Combine this all with the enthusiastic assistance of the bellmen and welcoming front desk team, the Nova Scotian brand of hospitality seems complete. 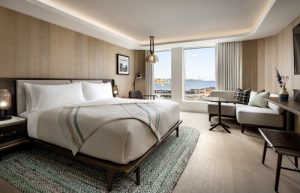 Guest rooms have views of the harbourfront that may include Georges Island in the distance
Photo: Muir

At Muir the guest rooms feature many elements reflecting the East Coast. The interiors and furnishings are the creations of internationally-acclaimed Alessandro Munge of Canada’s Studio Munge. The colour pallet here is composed of a warm and calming array of tones that you would find all along the coast here; evoking faded driftwood and sandy beaches. Walnut was used to craft the work desks, the bed frames, fully stocked private bars and also used in the Stickly-inspired lounge chairs and Ottoman. Even the wool throw at the foot of the bed has been custom designed and is known as the Muir Tartan. While all of the components reflect the seashore, it is the magnificent views of the actual coast laying a skipping-stone’s throw away that took away my breath.

But – there is much more to see than the inside of a guest room on this property. 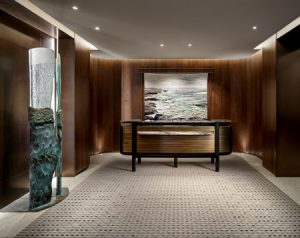 Muir highlights local artists throughout the hotel and in public spaces, including this woven tapestry by Allison Pinsent Baker inspired by the
Nova Scotia coastline
Photo: Muir

Art aficionados will not only appreciate the impressive collection that is displayed both inside and outside the public areas such as the gorgeous woven tapestry behind the front desk but can also treat themselves to a visit of the True Colours private gallery on the second floor. Over $7 million has been dedicated to fostering public art on this property including some rather spectacular installations on the actual waterfront.

Speaking of the waterfront, Muir also offers guests the opportunity to avail themselves (for a supplement) of their motorboat and yacht (yes, yacht) for guided tours of the harbour and even picnics on Georges Island. Landlubbers can also be chauffeured around the immediate parts of town in the house Range Rover (complimentary and depending on availability). We took it to visit the Seaport Farmers’ Market which is open on weekends (one of our rare excursions off the property!) More adventurous souls can take advantage of the hotel’s sea kayaks, stand-up paddleboards and boardwalk-cruising bicycles. 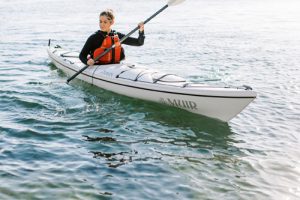 Many boating and water options are available to Muir guests including access to a yacht, motorboat and
sea kayaks.
Photo: Muir

Discerning business travelers will appreciate many of the touches and amenities that were seamlessly integrated into the property features. These include blanket Wi-Fi access, flat-screen TVs equipped with Google Chromecast devices, multiple USB and Lightning chargers and guest room doorways that are setback from the hallways to ensure a quiet working (and sleeping) environment. While not designed to hold business conferences (those take place at the Halifax’s new, massive convention centre located just up the street) this hotel is expected to become the hotel of choice for the attending CEOs and senior executives. Each of these will be fighting over the stunning 2100 square foot Presidential suite called “The Watch” with its panoramic view of the harbour similar to that of a captain’s while commanding a ship. It includes two bars and a private tasting room.  Guests also have access to a fully-equipped private executive meeting space, The Wardroom, that accommodates six while the art gallery can also be used to host private cocktails as well. 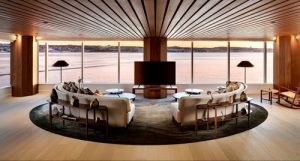 The Watch: The Muir’s presidential suite offers panoramic views of the water much like that of a sea captain’s
Photo: Muir

However, the real star of this seaside apparition is the food and the access to an incredible array of fabulous choices just steps away from your room. This partnership is known as Freehand Hospitality. In an astute move, real estate developers Armour Group Limited contracted with restaurant leaders Oliver and Bonacini to run the food operations throughout the hotel and the Queen’s Marque district.

We decided to start our culinary love affair at the aforementioned Drift which serves as the main dining room of Muir. We reserved for lunch as most evening times were fully booked. Although only open for a few months, Drift already has already developed a loyal reputation amongst the locals as one of the best tables around. And having now dined there, I can easily see why.

We decided to kick things off with a dozen oysters served with freshly-shaved horseradish and a light mignonette. Excellent! Next up was easily the best lobster bisque of my life! So delicious it is hard to describe but included delicate pieces of lobster seeped in a wonderfully rich bisque and dressed with puff croutons. One of our mains included fish cakes stuffed with lobster, Matane shrimp, haddock and served with a brown butter rémoulade and a “36-hour egg”. However, the real star of the show was the seared sustainable blue salmon served with wilted chicories, smashed golden nugget potatoes, smoked bacon and topped with a Nova Scotia oyster dressing. This salmon tasted so fresh it could have been still flailing on the plate. Extraordinary.

Bar Sofia’s cuisine could be described as Peruvian-fusion and has an added focus on its exotic cocktails
Photo: Bar Sofia

The incredible news is that Drift is merely a sampling of the other food offerings within the Queen’s Marque district, all within a stroll from the front door. Café Lunette will appeal to Francophiles longing for their favourite French café. When stepping onto this space you would be forgiven if you felt you had stumbled across it on a side street in Paris. Beautifully decorated, its secret sauce is that it features pastry chef, Cori Osborne, formerly of Toronto’s Canoe and Alo. Café Lunette is a perfect choice for lunch, dinner or a weekend brunch.

Another find here is Bar Sofia, which features what could be best described as Peruvian-fusion cuisine with an added focus on its exotic cocktails (expect sparklers and hollowed out coconuts as drink vessels. Bachelorette parties have taken note.)

Additional culinary treats include Sapori which is serving up traditional Italian dishes in a casual setting and Swanky Burger which looks like Canada’s version of Shake Shack (that is code for best burger anywhere). Oenophiles will find bliss in Peacock with its wine list of over 90 labels of small production and hard-to-find bottles from around the globe. Chocoholics will be salivating at Peace by Chocolate which was founded by Syrian refugees who already have developed a national reputation for their house made chocolates, desserts and drinks. Do not expect to be losing weight on this trip.

The bottom line, or as they like to say in these parts, the Plimsoll Line, is that Muir is truly an entire Maritime experience with an international twist. One stay here and you may find yourself also cashing in on your real estate and joining the immigration invasion of Halifax!