It was near the beginning of our conversation that Elias Makos made it abundantly clear that his dream job is the one he holds as the popular host of CJAD’s morning show in the 9am to noon slot, aptly named The Elias Makos Show. A lifelong Montrealer, Elias has grown up and lived on the island of Montreal; in Cote-des-Neiges, Lachine, NDG and now in the downtown area. “I love Montreal, and I think we often overlook how terrific this city is on the world stage.”

Elias is the youngest of three siblings by a gap of eleven years; including an older sister Vicky and brother Bill. “I grew up surrounded by people who were older than me, and that forced me to be able to express myself more effectively than other kids at my age. We talked about more serious things with my family.” For a person working in media, being able to state your views coherently is a necessary skill. This is especially true for a radio host who is interviewing guests live on the air without a script or prior rehearsal. 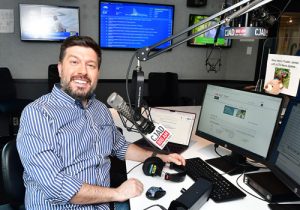 A radio studio is like a second home for Elias, who
welcomes Montrealers to his microphone
Photo: Rob Taussig

Elias attended the Concordia School of Journalism, specializing in Broadcast Journalism. He worked in public relations for the Montreal Expos. He also worked for The Montreal Canadiens in the scoreboard control room. “It wasn’t a big deal, but it was fun for someone in their 20s.” When the Expos left Montreal, it didn’t take long for Elias to find employment – in fact every job he’s had actually found him. “All of the jobs I’ve had came to me through my contacts made while I was at Concordia. That’s how I got all my jobs.”

During an interview for Concordia University Magazine, Elias told Richard Burnett that when addressing a group of incoming students, he said; “I’d like to give you some advice that all journalism students should get when they start. Look around the room and see all the people you have just met and I guarantee you that in three, five and 10 years these are the same people who will be hiring you, and you will be hiring some of the people around you. So be nice to all these people because the connections you make here will pay dividends.”

Elias is right on top of technology developments and this personal interest and his wealth of information has served him well. After graduating with a BA in Journalism, Peter Downie called him with the news that the faculty would be opening a technology department, and asked Elias to be a technical instructor. “Technical skills were quickly becoming a necessity for journalists, and it was a field that I knew well and kept my knowledge up-to-date.” Elias made a u-turn and headed right back into Concordia for a seven year term of employment… and more relationship building.

“I always knew that I’d be in media.

There was no question in my mind

that I’d do anything else as a profession.”

“Through my contacts from Concordia Journalism, I started to get calls to talk on radio and television about tech. Caroline van Vlaardingen from CTV called me for a TV appearance to talk tech, and she said; ‘I need a tech person… you’ll be back.’ And I was!” A few years later, Elias also was a regular guest with Sue Smith at CBC radio.

Professor Bob Babinski is another Concordia contact, and Bob asked Elias to be part of the on-air team for the brand new Citytv Breakfast Television show. Before the show as even launched, Elias signed on as a combination of producer and on-air host. “I’ve learned from people like Bob that you can accomplish a lot with a mixture of kindness and competence.”

Getting up in the middle of the night takes a physical toll on radio and television hosts who start their working days at 5:00 am, and Elias was no exception. It takes a lot of discipline to adjust your lifestyle so that you arrive on set well-rested and mentally sharp.

Elias began to have conversations with CJAD management to explore his potential interest in coming to CJAD. “I grew up listening to CJAD – so of course I had an interest. All the jobs I’ve had, especially CTV and Citytv helped to prepare me for this job as the host of my own radio show.” The conversations proved to be fruitful, and Elias started as host of The Elias Makos Show on CJAD on December 31, 2018.

“When I first started, it was pretty quiet on the news front for a while. The biggest story was a wind storm in Laval. I remember thinking that I wish I could cover a big story. And then, COVID-19 hit in early 2020. “The last two years have been a whirlwind. Working from home was a challenge.”

Elias brings what appears to be a boundless energy to his work. “I do put a lot of pressure on myself in the workplace. At home – it can be hard for me to get off the couch! Let’s just say that I’m more laid back at home…sounds better than lazy.”

“I want to make people think,

to focus on the day’s important issues”

Elias’ natural curiosity is an asset for his three-hour live radio program. “I’m generally a curious and interested person. I try to find ‘the angle’ for each story that I’m working on.” Referring to his late mother who passed away in November 2021 from ALS, Elias states; “My mom was a wealth of content. She was a classic Greek mother – with lots and lots of opinions!” 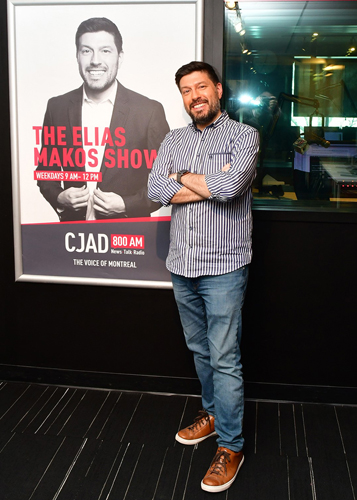 “Look – I want the show to entertaining as well as informative”
Photo: Rob Taussig

“I’m a voracious consumer of what I do for a living. I listen to radio, watch TV and read newspapers and magazines. My job is to know as much as possible, and bring that knowledge to my show. I want to be entertaining and I want to have fun. And you need to be positive! That makes for an engaging show.”

“I fear that people are losing faith in our institutions, governments and the media. There’s an underlying negative message that has become more present. I push back against the negative… I call it the ‘revenge of the centre’. People with far left and far right political views are so entrenched in their opinions that there’s nothing you can say to create a dialogue. To the extent that I’ll fight for the centre – you can say that I’m a radical centrist.”

During the pandemic – Elias championed the health practices based on science. “I’m all for Team Science. Let’s follow the directives of the scientists, doctors and health department.”

During our conversation, Elias went on to say that he is also on Team Secularism. “I really don’t think we need to have religion in positions of authority, such as judges and yes – even teachers. No one is asking that people renounce their religion – just that they not wear their religious symbols in the workplace.”

Elias starts each show with The Big Five, a half hour of lively discussion with a variety of guests. “The Big Five is a lot of fun – and its great way to begin the show.”

As we conclude our conversation, I ask Elias if we’ve missed anything, and he responds; “I work here at CJAD, and I really care about this radio station, our city and the position I have with this morning show.” Based on the top ratings, it’s evident that tens of thousands of Montrealers appreciate the role that Elias Makos plays in their daily lives.

The Elias Makos Show is on CJAD AM 800 from 9am to noon, Monday through Friday. Segments of the show are replayed in the evening, and The Big 5 is also available on podcasts.