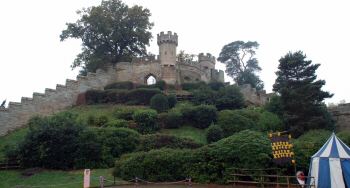 The Mound was ordered to be constructed by William the Conqueror Photo: Julie Kalan

If you ever pretended to be a princess or knight in shining armour, you are sure to feel that excitement and child-like exuberance as you enter Warwick Castle.

The air is damp and fresh from the early morning rain as I pass through the turnstiles and step out of the coach house, which now houses a gift shop.

Side stepping the puddles along the walkway, I am greeted by a one-eyed black and orange tortoiseshell cat. I do not know if this cat is a stray or someone’s pet, but I imagine it comes from a long line of castle cats dating back to its founding in 1068. Either way, she seems perfectly at home on the castle grounds and after a brief introduction, almost as if to say “welcome to my castle,” the cat disappears into the bushes and leaves me to explore on my own. 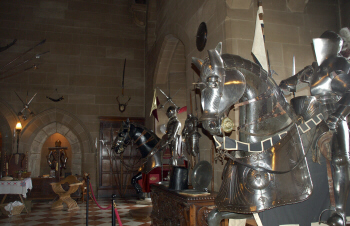 With the castle on my right, I follow the path that brings me to the main entrance.

Framed by formidable towers, the Barbican and Gatehouse were built with the sole purpose of thwarting invaders. Between two iron portcullises (gates that close vertically), attackers faced crossfire from arrow slits and stones or boiling liquid launched through murder holes in the ceiling. 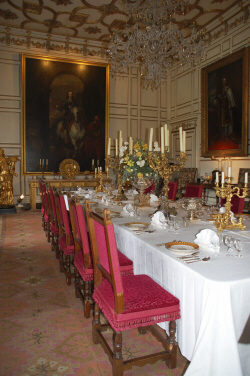 Luckily, it is far easier to enter the castle these days!

Beyond the confines of the entryway lies an expansive grassy oval courtyard. Medieval walls accentuated with towers encircle the area. At the opposite side of the courtyard stands the site of the original castle fortifications – the Mound. On the orders of William the Conqueror, the mound was built up and topped with a wooden fortress. As the castle expanded, the mound lost most of its defensive importance, but none of its visual impact. A paved serpentine path brings me to the top. From this vantage point, I can see the grounds beyond the castle walls. Down to my left, a footbridge crosses over the River Avon to River Island, the site of the world’s largest trebuchet. Made with medieval specifications and techniques, this giant catapult fires large stones twice daily during late spring, summer and early fall. 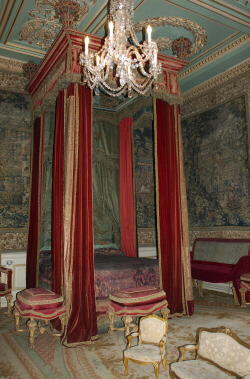 Queen Anne’s bed – she
returned to London without ever sleeping in it
Photo: Julie Kalan

The heart of every castle is the Great Hall. Constructed in the 14th century, with later renovations and restorations, the hall is grand and impressive. High above me, a lone chandelier hangs from the wooden beamed ceiling. On the right wall, three large windows look out over the mill and river. In front of the two furthest windows, knights atop their horses display battle armour. In fact, each stone wall is highlighted by the glint from metal swords, suits and shields.

The Queen Anne bedroom, with tapestries lining the walls, is most notable for the furniture. In preparation for a visit from Queen Anne, a royal bed was sent to the castle. Although the visit was cancelled, the bed stayed.

My bed for the night, while not regal, is at one of the lovely B&B’s, 8 miles (13km) away, in Stratford-upon-Avon. The next morning, with the bright sun keeping the chill in the air at bay, I begin my second day of visiting Warwickshire County in Shakespeare’s old neighbourhood. It is true that Shakespeare’s most prolific years were spent in London, but Stratford-upon-Avon was always home and it is here that the Shakespeare Birth Trust runs the five historic houses associated with him and his family. Three houses are within Stratford-upon-Avon proper, while the other two are only a few miles away. I plan to visit all five houses’, so I am taking advantage of the hop-on hop-off City Sightseeing bus tour. 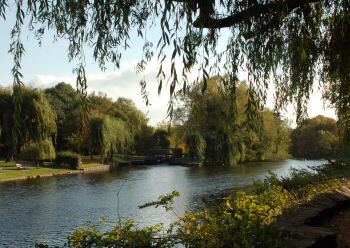 My first stop, Shakespeare’s Birthplace is a surprisingly large timber-framed house on Henley Street. Inside, period furnishings, original flooring and his father’s glove making workshop set the scene for the home that saw William Shakespeare grow from an infant to the world’s foremost playwright.

Nash’s House, home of Shakespeare’s granddaughter, contains some interesting period pieces and is adjacent to the site of Shakespeare’s last residence, New Place. Unfortunately, New Place was demolished in the 18th century, leaving only the gardens for visitors to enjoy.

However, if you go from now until October 30th, 2011 you are in for a real treat. For the second summer in a row, archaeologists working on the Dig for Shakespeare project will be welcoming the public as they sift through layers of soil at the excavation site.

Hall’s Croft, home to Shakespeare’s daughter Susanna and her husband John Hall, is a very elegant home. Perhaps the most interesting of the properties, the home features the writings, instruments and herbs that Dr. Hall used in his medical practice. Considered one of the most eminent physicians of the day, his detailed record keeping has revealed quite a lot about the maladies and remedies of Jacobean England.

Just down the road is Holy Trinity Church, the site of Shakespeare’s baptism and burial. Like visitors have for hundreds of years, I head to the altar and read the lines inscribed on Shakespeare’s grave, “… Bleste be the man that spares thes stones, And curst be he that moves my bones.” Leaving the sanctuary, I turn and walk around the church to the edge of the river Avon. Here, is the perfect spot to take a moment and enjoy the peaceful beauty of this quaint and quiet area. 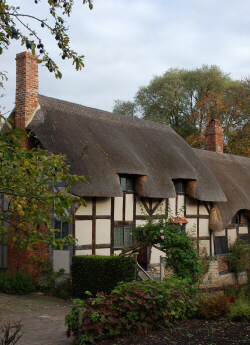 Surrounded by wildflowers, Anne Hathaway’s Cottage is the quintessential thatched, English house. The home where William wooed his future wife is a mile (1.6 km) from Stratford. The large black stones on the kitchen floor have worn unevenly over the last four centuries. Along one wall is a large open fireplace and bread oven. It is here that a period dressed guide describes the workings of an Elizabethan kitchen.

At Mary Arden’s Farm, the childhood home of Shakespeare’s mother, visitors experience 16th century life on the farm. There are chickens, goats and pigs to feed and tend to in the yard. The nature trail brings me past a small orchard and then to a field of sheep. These animals with long woollen bangs, resembling dreadlocks hanging over their eyes, are highly prized Cotswold sheep.

I like this place and willingly could waste my time in it
As You Like it (Act II, Scene IV)

Touring these sites offers an incredible insight into Shakespeare’s world. Whether you are a fan of the Bard’s prose or someone who struggled through each act and scene, a visit to Stratford-upon-Avon is a delight.

Traveling by train from London’s Marylebone station to Warwick takes less than two hours. The same rail link to Stratford-upon-Avon takes 2 ¼ hours. Travel time between cities is 30 minutes or less by both train and local bus. Great B&B’s are located within walking distance from train stations in both cities.

For more information on the attractions, please visit www.warwick-castle.com and  www.shakespeare.org.uk