Tarah Schwartz worked for eighteen years as an award-winning reporter and television anchor. When she and her husband Enrico became pregnant – they were overjoyed. That joy turned to an overwhelming grief when Tarah lost the baby at five months into her pregnancy. “I started to write about my experience, our experience as a couple and the deep hole that I was living in. I wanted to wake up in the future – but of course you can’t do that.” 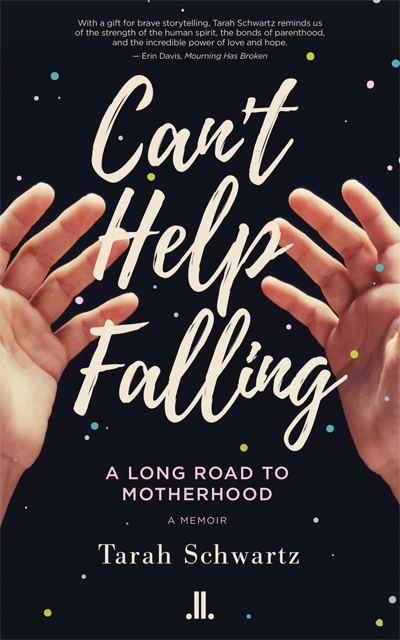 There would be other miscarriages and more sorrow. But Tarah kept getting up. Finally, she and Enrico decided to adopt; but as she recounts in her now best-selling book Can’t Help Falling, there were complications in that process as well.

Tarah sent her manuscript to Linda Leith Publishing, a Montreal-based publishing house. (The Montrealer, October 2021) The company accepts manuscripts only once a year, and they accepted Tarah’s book for publishing. Linda Leith and her colleagues saw a story of courage, emotional strength, and optimism that they believed could be both instructional and inspiring.

“Rarely do stories like this get told, and
even more rarely with such candor.
Can’t Help Falling will stay with you
for a long time.”
– Natasha Hall, CJAD

Tarah continues; “I wanted it to be well-written… I wanted it to be a beautiful book. I also wanted to give women a voice. I know that not every story has a happy ending, but for me, Enrico and our son Sam, we’re blessed. Sam once asked me; ‘Why did you call your book Can’t Help Falling Mommy?’ I told him that there were two reasons. I fell a lot – but I kept getting back up. The other reason Sam, is that I can’t help falling in love with you.”

Tarah’s advice for people considering adoption is to; “Get started now! You don’t have to say ‘Yes.’ There are so many opportunities that you should start your research.”

Can’t Help Falling is published by Linda Leith Publishing; and is available as a physical book and an e-book. www.lindaleith.com