“I want the world to remember that it was his dedication, determination and his love for music and humanity”. Those were the words of Kelly Peterson, widow of Montreal born jazz legend Oscar Peterson when we sat down recently for a phone conversation to talk about a new Oscar Peterson release and about her life with the piano legend who was “The Pride Of Little Burgundy”, the oldest Black community in Montreal that Peterson was raised in.

“It was also his life-long stance for human rights and in believing that everyone has value”, she said, remembering that the man that Duke Ellington called “The Maharajah Of The Piano” was not just about tickling the ivories but cared about the society that he lived in. 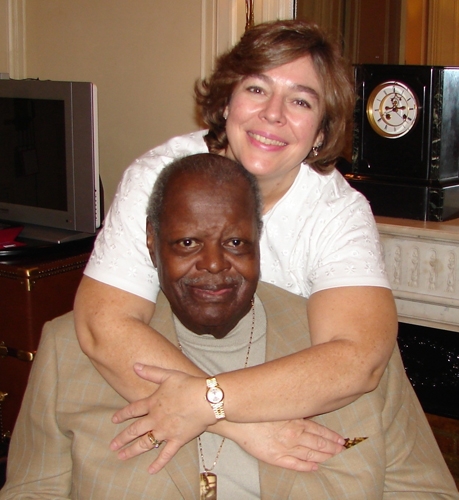 Kelly Peterson with her late husband, the incomparable Oscar Peterson

“There’s so much music that he composed that I hope to keep sharing”, she said.

The latest of that music comes in the form of a double album just out on Mack Avenue Records called “A Time For Love” by Oscar and his quartet. It’s from a 1987 concert in Helsinki which closed off his quartet’s European tour.

The axe-men in question are Martin Drew on drums, Dave Young on bass and the incredible Joe Pass on guitar, whom as always is given lots of opportunities to shine in this show. Peterson and Pass’ musical telepathy runs so deep that ones had to closely listen to hear exactly who’s playing when even the tones on their respected instruments start to sound alike.

“Oscar always wanted Joe to shine. They were very close”.

Kelly met Oscar in Sarasota, Florida in the 80’s. Kelly said, “I was a fan of his. He came to play a concert and I couldn’t go because I was the new manager in a restaurant but If I had gone to the concert, I would not have met him. It all worked out. He (Oscar) would never eat dinner before a concert, and he needed a restaurant to go to late at night after the concert and we were the only restaurant in town that served food after ten o’clock”.

“So, he came to the restaurant and that’s how I met him” she said with a beautiful reflective chuckle.

The new couple spent a year and a half courting before Kelly was brought into his world of world tours and recording. Kelly was on the European tour that culminated with the release of the live Helsinki concert captured on the new album.

“I remember the whirlwind of it primarily. At that point, I had been living with Oscar for a year, so it was all new. Even though I had been on and off the road with him during the years before we were married, it was still quite a whirlwind with getting to know the routine and all the moving around and getting from place to place. I remember the exhilaration of it and the great joy that emanated from all of the musicians (in Oscar’s band) and from Oscar especially. He was so happy to be performing and so passionate about it and had great fun. No matter how hectic it was and how tiring it was, it (Oscar’s performances) was like a special occasion every day.”

Kelly also shared with me something about Oscar that was even more mind-boggling than the way he tickled the ivories in the prodigious manner that Art Tatum did. “Oscar never did a set-list (for his live concerts). No, it was not his habit”, she chuckled. “He often didn’t even go to the sound-check. He would let the guys go and then just show up (at the gig).

When asked about Oscar’s reflections of Montreal before he headed down the 401 in the late 50’s to call Toronto his new home. Kelly said, “The memories he shared with me (of Montreal) were about the vibrant music community. The whole cultural feeling of the city when he was growing up, wanting to play baseball as a kid”.

I mentioned to Kelly about her appearance in last year’s theatrically released documentary about Oscar’s life called “Black + White”. While music greats like Quincy Jones and Brandford Marsalis waxed poetic about Peterson’s musical prowess, Kelly emotionally talked about the man in the film. “It was hard to talk about those memories because I miss him. His daughter (Celine) misses him and his other kids (from Peterson’s 1st marriage) miss him. I wish he was here”.

Peterson had been plagued with arthritis for many years. He had hip replacement surgery in the 90’s and suffered a stroke in 1993. The stroke hampered his playing somewhat but undaunted he continued to perform and still electrified audiences around the planet. On Dec.27, 2007, Peterson died of kidney failure at his home in Mississauga, Ontario.

Asked if she sometimes forgets that this beloved musical master is no longer with us, she replied, “Yes”, she said smilingly and affectionately. “That’s a good question. Yes, occasionally I have to remind myself. You know it’s been 14 years now. So it’s (been) quite a while. But I also feel that he is still here. The music is here forever, and his spirit is here with us and the fact that people are listening to his music, playing his music and thinking about him and talking about him, I think keeps that (his legacy) alive. As a widow, I’m quite fortunate in many ways because there’s so much (documented about Oscar), there’s videos, I can hear his voice. There’s so many men and women who have lost their spouses that don’t have that”.

A Time For Love – The Oscar Peterson Quartet Live In Helsinki 1987 is out now!