Casteliers is delighted to once again be presenting performing arts in theatres at the 17th edition of Festival de Casteliers, to be held March 2 to 6, 2022 in Montréal. This major annual event for artists of the 11th art will highlight puppet theatre from across North America, hosting shows from Mexico, the United States, Nunavut and Québec, for a curated portrait of dramatically rich material that is combined with movement, music… and sometimes the spoken word!

This year’s line-up includes eleven creative works for adults and children, outstanding works, and new creations that we have been waiting for months to see! The Mexican-Québec co-production ¡Burros! will open the festivities, outside and then inside Outremont’s Saint-Viateur church. Bring the whole family to be part of a carnival-like celebration! The official opening night will follow at Théâtre Outremont with the presentation of Innamorati, by Montréal’s Quatuor Bozzini and Marcelle Hudon. They have promised a playful opus of contemporary music, puppets and shadow theatre. The following days will be dedicated to the many forms of the 11th art.

Body Concert is a hybrid dance/puppetry performance that unfolds as a series of haunting vignettes that celebrate our shared human condition, while highlighting our vulnerability and our resilience. Inspired by Japanese Butoh dance and performed to a bittersweet electroacoustic score, the show resonates like a poem and is accentuated with heartbreaking hints of nature throughout. Expanding the puppetry genre boundaries, this minimalistic solo show features beautifully sculpted foam rubber puppets, oversized limbs stripped of their skin, which become a mesmerizing sculpture of moving muscle, tendons, and bone, in an extremely rigorous choreography.

Muntergang and Other Cheerful Downfalls is a puppet show inspired by the life and work of Zuni Maud and Yosl Cutler, two talented and radical American book illustrators who came up with the idea of creating a Yiddish puppet theatre, the Modicut Puppet Theater, in 1925. They were an immediate success in New York’s Lower East Side, merging Jewish tradition, high art, and left-wing politics. Their hilarious plays were subsequently performed to sold-out audiences across the United States, Europe, and the Soviet Union. Using Maud and Cutler’s original images, songs, and scripts, this show is a meditation on their incisive satirical work and on historical models of robust embodied practices for changing social power relationships. 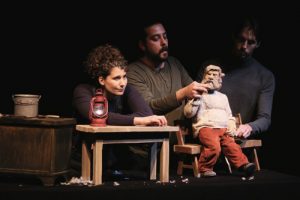 From Mexico, Mi’ño Teatro de Sombras will tell us in French and Indigenous languages the story of The Biggest Sister in the World, a shadow theatre performance about corn cultivation through the centuries and the indigenous cultures of America, drawn from discussions between the Ñäñho and Kanien’kehá:ka nations. Sara Moisan from La Tortue Noire will present As Flesh Fades Away, a multimedia work that is a touching testimony about her father, who was a painter. In Racontars arctiques, La ruée vers l’or uses tabletop puppets and varying scale to stage the graphic novel of the same name. L’histoire à finir de Jimmy Jones et de son camion céleste is a road trip through a mythical 1950s America – its diners, car washes, drive-ins, and endless cornfields. With this grand premiere, Montréal’s La Pire Espèce will celebrate object theatre as only they know how!

Another grand premiere at the festival will be L’île aux patates by Théâtre Magasin. An adorable and wacky story directed by Joël da Silva that combines 2D puppets, tabletop puppets and video animation. A unique short form, Pantition by Mylène Leboeuf-Gagné and Serge Bonin, will also be presented. Lastly, the festivities will close with a presentation of Cuckoo, a rod puppet show by Graham Soul that will take the whole family into the undisciplined life inside a cuckoo clock.

You can purchase your tickets online at www.theatreoutremont.ca or call the box office at 514-495-9944