To call Jimy Sloan an emerging artist, would be to use a misnomer.  Rather than emerge, he exploded onto the art scene with works of astounding maturity. Graduate of the Nova Scotia College of Art and Design University, he boasts a style that is utterly contemporary and deliciously audacious.

The scope of his art is large, and ambitious. He sees his paintings “transform through a process of distillation and media exchange, engaging aspects of historical and contemporary modes of representation.” 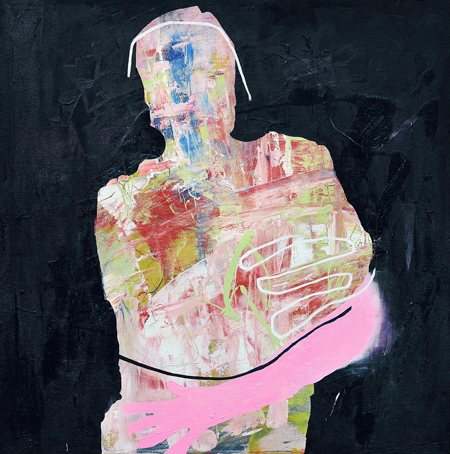 Translated onto canvas, his words become but an echo against the rich visual landscape that is his oeuvre. There is a cosmic aspect to his compositions; fluid, unencumbered brushstrokes invoke the human form against an abstracted, vast background, at times reminiscent of the work of contemporary German painter, Daniel Richter and his large figures, inspired by newspaper images and historical publications. Sloan also draws inspiration from the media and other sources to create his pictorial lexicon, giving his paintings a sense of immediacy. There is implied movement, even speed; images overlap and separate. Painted in bright, almost psychedelic colours against an inky background, the forms explode and pulsate. In Animal House they seem distorted by movement, edging into abstraction, morphing in front of the viewer.

The solitary figure in a work titled In a Sense of Innocence resembles an astronaut suspended in space, a shape composed of colour and frenetic lines, inchoate, or maybe in the process of dissipating.

Sloan’s audacious use of the palette stands in place of the narrative, which the titles of his works seem to insinuate. Bold and expressive, the paintings are in constant dialogue within the confines of the frames, free to escape at any moment, appearing in constant flux. In Place to Stand, the central figure is accompanied by lines and dots, suspended amid an entire universe of abstract swirls and loops. It is as if the multicoloured form was unravelling, or, again, perhaps taking shape. This duality, a subtle dichotomy, in Sloan’s compositions creates a vibrant visual discourse. Deciphering the narrative is left to the eye of the beholder, the beauty of the image self-evident. It lies not only in the physical, pictorial aspect of his paintings but also in the innocence of which they are born. There is something sincere, not to say humble, in Sloan’s approach. It is due to some degree to his age, but more so, to his personal vision. 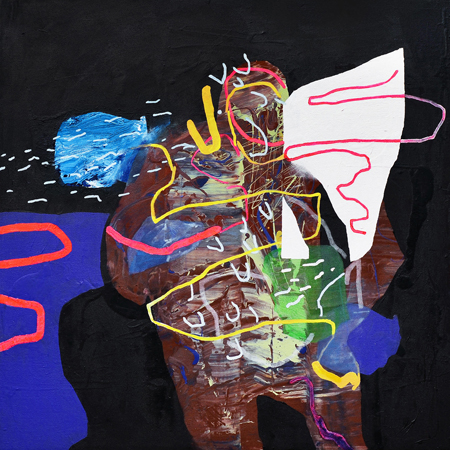 It would not be a stretch to compare him to Peter Doig, whose figurative works possess the same boundless energy. Doig’s art has been called ‘Metamodernism’ for lack of a better term, one that could also be applied to Sloan. Defined by ‘naivety’ and ‘pragmatic idealism’ it is an attempt, yet again, to find a label where none is needed.

Sloan’s paintings carry their own visual manifesto, and are the product of an inquisitive, and as yet unfettered, creative spirit. They are also, inevitably, the product of the modern era, where the constant, relentless deluge of images and data inexorably moulds and distorts our reality. The ‘transitional space’ he creates in his works echoes this, as do his fragmented, fraying figures. Seen from that perspective, they are a portrait of a modern being, one composed of pixels and bytes, of binary lines and graphs. Tossed and jostled by these visible and invisible currents, it has lost its static form and is in the grip of a transformation beyond its control.

Rather than imply a new shape, Sloan leans towards abstraction, as his latest works-in-progress seem to suggest. Giving full rein to colour, he is opting for a graphic approach, with loose lines and colour patches forming an oscillating, undulating composition. Somewhere between these two pictorial universes, Sloan is building a new imagery, a harbinger of a bold contemporary style that will have critics scrambling for a definition. Let it be.

Dorota Kozinska is a writer, art critic, and editor based in Montreal.  Her art reviews and articles have been published extensively in Vie des Arts, Parcours informateur des arts, and The Gazette, as well as broadcast internationally on CBC Radio. She is the author of numerous artists’ catalogues, and an independent curator.