One of five newspaper cartoonists whose work is featured on a stamp, Chapleau is honoured for his unique take on 50 years of news.

Serge Chapleau has drawn inspiration from the biggest European cartoonists and is known for his unique style and high-precision work. From his very first drawing, a portrait of singer Gilles Vigneault published in Perspectives magazine in March 1972, Chapleau became an overnight sensation and quickly established himself as one of the top cartoonists in the Montréal press. After working for various publications, including Le Devoir, L’actualité and 7 jours, he became staff cartoonist for daily newspaper La Presse in 1996, a position he holds to this day.

From doodling in the margins of his schoolbooks to drawing the biggest local and international personalities, Serge Chapleau has gone from pens to touchscreens in his half-century-long career. Known as Quebec’s most famous press cartoonist, he nonetheless frowns when asked about what that implies.

“I don’t think ʻcartoonist’ is a job title. In fact, there’s no such thing as a cartoonist. It’s not a job, it’s the result of going off course!”

In the early 1950s at the Chapleau household on Drolet Street in Montréal, no one played hockey or copied Maurice Richard’s great plays. This modest, working-class family had no books, only paper and pencils. The youngest of seven children, all boys, Serge made his way straight to the École des Beaux-arts de Montréal, an institution that “saved his life”, one drawing at a time. While not very talented when it came to painting or sculpting, Chapleau’s passion lay elsewhere.

“My role models came from the comic book scene. It was the era of magazines like Pilote or Fluide Glacial. We were poor hippies, so we bought magazines instead of food and we loved it!” 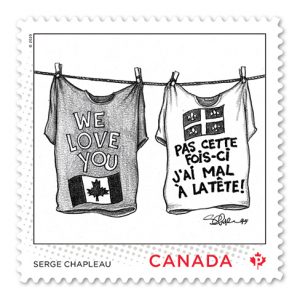 “We love you” “Not tonight, I have a headache!”

Through more than 7,000 drawings over the past 50 years, Chapleau has made people laugh and think by conveying the zeitgeist in a single image. In 1982, as a true pioneer of his profession, he became the first cartoonist to bring his characters to life on television. First with rubber puppets, then graphic animations, his famous character Gérard D. Laflaque captivated audiences, and nearly 500 episodes of shows Et Dieu créa… Laflaque and then ICI Laflaque were aired on Radio-Canada.

Winner of a record eight National Newspaper Awards (Editorial Cartooning category), Chapleau has published L’année Chapleau, a yearly collection of his best press drawings, since 1993. When he was named a Member of the Order of Canada in 2015, he was recognized as “one of Canada’s most innovative and respected cartoonists,” and also a pioneer, having created animated cartoons for television.

His cartoon selected for the stamp expresses the bitter taste left with many Quebecers from the large gathering in Montréal three days before the 1995 referendum on Quebec sovereignty. On October 27, 1995, some 150,000 Canadians from across the country gathered in the city to proclaim their love for “La Belle Province,” an event sovereignists strongly criticized.

Chapleau’s stamp will be available at canadapost.ca and postal outlets across Canada on October 8.

Chapleau, Profession: Cartoonist – at the McCord Museum runs until January 9, 2022.

These talented Canadian artists have made us laugh, reflect and cry with cartoons that tap into the emotions of a country. Their combination of humour and art has enlightened and entertained us, contributed to national debate, and brought attention to unfairness and injustice. Canada Post is proud to honour their enormous contributions to Canadian media and society.

A live panel discussion with the cartoonists and Ian Macpherson, Duncan’s son, will be held online on October 8 at 11 am, ET. Register for the webcast here.

The Editorial Cartoonists stamps and collectibles will be available at canadapost.ca and postal outlets across Canada on October 8, 2021.