Irving Ludmer, one of Montreal’s most successful entrepreneurs and business leaders, is playing a leading role in making the city a global hub in brain research informatics

Less well understood is the fact that Montrealers are taking a leading role. “Scientists know more about outer space that we know about the inside of our own brains,” says Irving Ludmer, one of the city’s most successful entrepreneurs and the driving force behind the Ludmer Centre for Neuroinformatics and Mental Health which he helped found in 2013. “We wanted to help address that issue.”

Ludmer’s contributions have helped turn Montreal into an international brain research hub. “The idea of what makes consciousness possible has always fascinated me,” said Ludmer. “I regard the brain as the universe within and made it my mission to find out more.” Spending research dollars wisely is hard. Skilled philanthropists thus often generate more value through the time they invest than the money they contribute. Ludmer, who first came to broader public attention after he rejoined Steinbergs where he had begun his career, is one example.

“The idea of what makes consciousness possible has always fascinated me.” – Irving Ludmer

Ludmer took on the CEO spot at the historic grocery retailer in 1985, and later managed a highly-successful divestment of the business which was suffering competitive disadvantages due to crippling labour contracts. However Ludmer, who graduated from McGill University in engineering physics in 1957, and worked with several of Quebec’s most successful consultancy, real estate and retail businesses, always had much broader interests.

A revolution in brain research

The nearly $20 million in support that The Ludmer Family Foundation’s has provided to The Ludmer Centre, which seeks to find ways to streamline and synthesize more 20 years of research knowledge, neuroinformatics expertise, and infrastructure accumulated at three major institutions is helping to do just that. 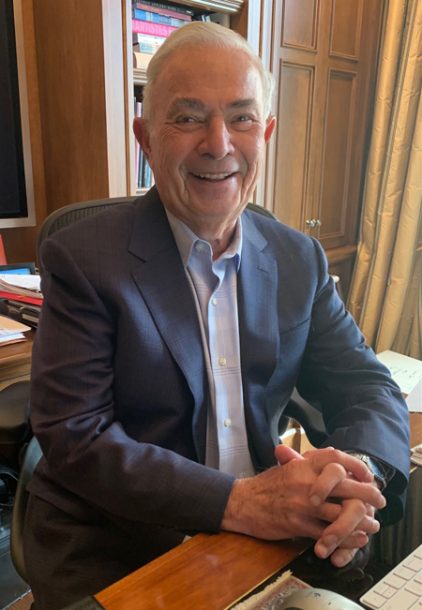 Irving Ludmer attends brain research conferences all over the world

The Douglas Mental Health University Institute, the Jewish General Hospital, and the Montreal Neurological Institute (MNI), which are the Ludmer Centre’s three driving bodies all bring a range of capabilities to the table. However, each contributes in its own special way. For example, the Douglas Hospital, which is a leader in mental health has accumulated a pool of 4,000 brains that can be used for study. The Jewish General Hospital’s Lady Davis Centre has capabilities in biostatistics and mathematical analysis and the Montreal Neurological Institute is a leader in brain imaging.  However, pooling these capabilities and sharing them in a Global Brain Consortium that includes Canada, China, Cuba, as well as the U.S., Europe and many other countries generates outsized effects.

“The Ludmer Centre is uniquely poised to become a world leader in big-data analysis for brain and mental-health research,” says Evans. “If we make information such as a global database of MRI brain scans available in the public domain where they can be used by hundreds of researchers, rather than the one of two that worked on specific projects we can vastly expand effectiveness.”

Ageing is far from the Ludmer Centre’s only area of interest. Diagnosing and classifying mental disorders – such as schizophrenia, anxiety, and attention deficit – which has hitherto relied on the checklists of physical symptoms is another key area that is ripe for innovation.

For example development of blood or saliva tests that doctors could use to diagnose depression or bi-polar disorders, or predict if a given child is at risk of developing a mental illness would provide a major advance. Ludmer Centre officials argue that “big data” mining combined with neuroinformatics, genetics, epigenetics and neuroimaging tools and research could one day improve prevention, diagnosis and treatment.

The Ludmer Centre was recently involved in the development of a key insight related to Alzheimer’s, when a researcher associated with the institute noted that buildups in amyloid,  which accumulated in the brains of patients associated with the disease, occurred not because the protein was being produced in excess, but rather because it was not being washed away.

While the Ludmer Centre’s future plans depend in large part on Ludmer’s success in raising the funds to finance new research, all indications are that it is just getting started. While new and refined pharmaceutical interventions are naturally on the table, brain researchers are increasingly asking grandma for advice. One expert we spoke to suggested that a key difference between President Biden’s mental profile and that of Fauci, his chief pandemic advisor, may be related to the latter’s lifestyle which is highly focused on exercise and healthy eating. “Good blood circulation is good for the body,” we were told. “But it also appears to be good for the brain.”

Ludmer, who travels the world to attend research events, meet and badger brain specialists, and learn ever more about the field has made it his business to continue to drive the institution forward says one long-time crony. “Irving, who is an engineer by training, is one of the few people who could keep up with the top experts in the field,” notes Myer Bick, former president, and CEO of the JGH Foundation, who played a critical role in driving the Ludmer Centre forward. “Judging from his enthusiasm, I don’t see that stopping anytime soon.”