A historic birthday for the oldest hotel in Canada

The Clarendon Hotel, Canada’s oldest hotel, reopened on June 10th, in time to celebrate its 150th birthday. The original plan was to mark the historic anniversary in 2020, but the pandemic put the family-owned hotel’s anniversary party on hold.

The Hôtel Clarendon in Quebec City is
celebrating its 150th Anniversary

“You have no idea how excited we are to see our team back in action and welcome clients to our beautiful, completely refurbished hotel,” said Clarendon Hotel co-owner Michel Côté. “We had just put the finishing touches on 12 months of major renovations after a fire, just in time to celebrate our 150th anniversary, when the pandemic compelled us to close our doors anew for an extended time.” Repair work and upgrades to the 144 rooms amounted to $10 million.

“It still matters to us that we commemorate the Clarendon Hotel sesquicentenary. It’s a true heritage site among tourist lodgings,” said co-owner Marc-Olivier Côté. “This is a family-run business, and it’s our privilege to operate this historic establishment. We’re proud to keep this jewel of Québec City’s heritage thriving.”

Located in the heart of Old Québec a stone’s throw from major tourist events and other attractions, the Clarendon Hotel is a true city landmark. It has always been owned by Québec families and has long been a part of the rich history of Canada and Québec.

From printing house to hotel

When architect Charles Baillairgé constructed the building in 1858 at the corner of rue Sainte-Anne and rue des Jardins, he could never have imagined that the four-storey stone-and-brick neo-Renaissance structure would become a hotel. In 1860, George-Edouard Desbarats and Stewart Derbishire took possession the property and redesigned it to house the Queen’s Printer. Their main duties consisted of printing and distributing documents, legislation, and the official newspaper of the United Province of Canada government. Ten years later, the Desbarats family commissioned architect Edward Staveley to convert the building into a hotel, which became known as Clarendon House.

The Clarendon – a family affair

Even though the Clarendon Hotel has always been operated by Québec families, this independent business has undergone major changes over its 150 years.

It was first owned by the heirs of Desbarats and Derbishire, but it was managed by William Russell & Son under the name Russell House. Théodore Hilaire Lizotte took over in 1894, changed the name back to Clarendon House, and oversaw renovations at a cost of $6,000 that included new paint, wallpaper, plumbing, and hot water heating. At that time, room rates were between $2.00 and $5.00 per day.

The Côté family invested $10 million to
renovate all 144 rooms

Clarendon House was being managed by J. Télesphore Bégin in 1912 when a fire started in the closet of one of its 40 rooms. The first two floors suffered extensive water damage. Repair costs were between $2,000 and $4,000.

Several years after this unfortunate event, hotelier and father of twelve children; Joseph Drapeau bought the hotel. He commissioned construction of a flat-roofed floor, adding 30 new rooms. Two years later, the Drapeau family bought the neighbouring property, known as Hotel Henchey, and undertook expansion work with help from architect Raoul Chênevert. Chênevert took inspiration from Art Deco to restore the building, connecting it to the Clarendon and adding 50 rooms. The main entrance, notable for its splendid wrought oak doors, was moved to rue Sainte-Anne where it remains to this day.

In August 1943, the Clarendon played a key role for journalists during the Québec Conferences. While Winston Churchill, Franklin Delano Roosevelt, and Mackenzie King met at the Château Frontenac to develop military strategies to end the Second World War, the Clarendon welcomed the international cadre of journalists covering these crucial talks.

The Côté family era: 2012 to the present day 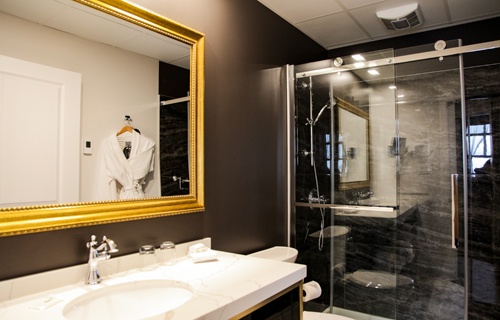 Entrepreneur Michel Côté and his son Marc-Olivier bought the Clarendon in 2012, perpetuating the tradition of family hotelier ownership. After more than seven years of success at the Clarendon, father and son faced a major setback when a fire broke out in the attic, forcing a 12-month closure. Extensive damage, mostly from water that spread to all floors, obliged them to refurbish and upgrade all 144 rooms. They invested more than $10 million in this large-scale undertaking.

This Old Québec icon came away from the fire with a completely new look and fully modern amenities, while also preserving the cachet and warm ambiance of a period hotel. Destination restaurant Les Mordus now calls the Clarendon home, drawing seafood lovers with its creative menu.

Located in the heart of Old Québec The Clarendon is close to major tourist attractions. The 144-room hotel offers a distinctive historical setting combined with the comfort and services of a four-star hotel. For more information about The Clarendon Hotel, please visit: www.hotelclarendon.com