For Joyce DiDonato, Schubert’s Winterreise is one of “the masterpieces: those holy relics of unparalleled genius that have changed the course of the art form entirely … a singular, crowning achievement in song.”

Composed in 1827, the year before Schubert died at the age of just 31, Winterreise is made up of 24 songs, written to texts by Wilhelm Müller. The cycle, perhaps the ultimate challenge for performers of Lieder, tells its story through fragments and references rather than structured narrative. It is seen through the eyes of a heartbroken young man, disappointed in love, who makes his way through a desolate, frozen winter landscape. Exactly what happens at the end is unclear, but it is generally assumed that, after the chilling final song about an obsessive beggar musician, the young man commits suicide.

Traditionally, Winterreise has been the preserve of tenors or baritones, but some major female singers of previous generations have set their stamp on it: Lotte Lehmann, Elena Gerhardt, Christa Ludwig and Brigitte Fassbaender. Joyce DiDonato joins this distinguished company by taking a characteristically probing approach to the cycle. As she says, “Perhaps one element of a true masterpiece is that it invites itself to be experienced in a new light.” 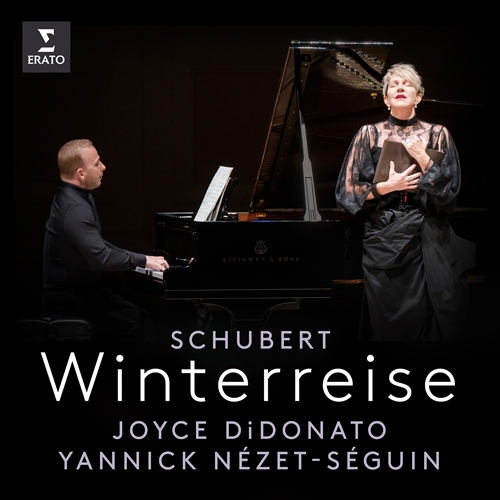 The choice of repertoire can be credited to DiDonato’s partner for this recording, pianist Yannick Nézet-Séguin, who suggested Schubert’s cycle to take on their recital tour together. DiDonato admitted that she had never considered taking on Winterreise: “For me, that belonged to other people.” With Nézet-Séguin’s encouragement, she spent time exploring the material and became fascinated with the woman in the story, “the survivor”.

“But what about her? The woman he loved and who, for whatever reason, disappointed him,” she asks. “Perhaps it’s my identification with Charlotte in Massenet’s opera Werther that kept this question front and centre in my mind. I’ve always wondered what happens to her when the curtain comes down [after Werther has died from a self-inflicted gunshot wound] … What if the young man of Winterreise sent her his last journals before he parted? What if his final words arrived to her as a kind of suicide note? … And what if she reads the writings? Word for word. Over and over … ‘Ces lettres … ces lettres,’ Charlotte screams out in Werther … So what about the woman who spoke of love in the first song of Winterreise? This can also be her journey.”

As Nézet-Séguin points out, in this version, one might even say that the piano itself takes on a new role, that of Schubert’s original protagonist witnessing the outcome of his actions, as the woman reads the heart-wrenching words he has left behind. “It really becomes a parallel journey,” DiDonato explains, “between the man’s words and emotions, and then the woman’s experience of them.”

Joyce DiDonato recorded the song cycle at New York’s Carnegie Hall in December 2019 with Yannick Nézet-Séguin, who in his customary role as conductor is music director of both the Metropolitan Opera, New York, and the Philadelphia Orchestra, and Artistic Director of the Orchestre Métropolitain of Montréal. Musical collaborations require a base of trust, DiDonato explains, and she finds this easily with Nézet-Séguin, who fosters “a space to create … I can’t imagine a better partner for this.”

The New York Times summed up the concept behind the interpretation: “Not content to simply sing Winterreise as a mezzo-soprano, Ms. DiDonato sought something different in the version she brought to Carnegie Hall on Sunday, with Yannick Nézet-Séguin trading his conductor’s baton for a seat at the piano. Their Winterreise hinges on a change in perspective. Little is known about the cycle’s protagonist, other than that heartbreak has sent him on a bitter march toward despair and possibly death. Even less is revealed about the woman he loves – yet her story is the one Ms DiDonato wants to tell.”

After the performance at Carnegie Hall, New York Classical Review wrote that Joyce DiDonato gave “a searching interpretation of the cycle, her emotions raw, her musical choices seemingly as spontaneous as though she were encountering the text for the first time,” her concept of reading the journals “generating the intense emotional responses that made her interpretation so moving … What stood out was the heavy emotion that came through in her singing, as she lingered on a syllable here, pressed her tone there. … Within the song tradition, Winterreise is profound, a genre-defining work, but even beyond its own domain it stands as one of the great achievements in art … When great artists undertake Winterreise it is a transporting experience, and we’re lucky that DiDonato has added her interpretation to the performance tradition.”