Have you been thinking of making a meaningful donation to a cause close to your heart but wonder if you may need to rely on the income that would otherwise be generated by your capital? What if you could do both? Give generously now, while taking care of you and your loved one’s financial security. With a Charitable Remainder Trust (“CRT”), both are indeed possible. A CRT allows you to donate now, while still benefiting from the annual income of the trust.

“A CRT allows you to donate now,
while still benefitting from the
annual income of the trust.” 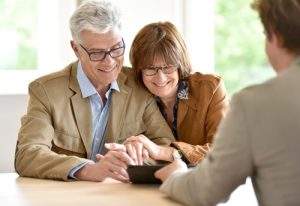 A CRT includes a lasting legacy and prudent tax planning

Here’s how it works:

Assume Barbara and David, a retired couple, have accumulated savings over their lifetime. They would like to donate to charity but hesitate to think they may need the income earned from their savings to live on. If they were to donate part of their capital, they would lose the investment income generated by that capital.

1)They would continue to receive the income earned on the capital in the same way as if they had not transferred the capital to the charity. Therefore, the funds available for them to live on would not be diminished. They would get a 3.5% annual return, giving them $35,000 of income every year during their lifetime. With interest rates rising the annual return would increase.

2) They would receive a donation receipt which could be used to offset taxes in the year of donation or over the next 5 years. It is important to note, that the donation receipt will be discounted. As Barbara and David will continue to receive the income during their lifetime and the charity will only have access to the funds at some time in the future after their death, the amount of the receipt will be reduced based on their life expectancy. If, for example Barbara and David were 74 years old, the donation receipt may be approximately $700,000, which could save them $350,000 in taxes, assuming they are in the highest tax bracket.

“The funds available for them to live on would not be diminished, giving them an income every year during their lifetime.”

The outcome? An immediate benefit to Barbara and David and as well as a long-term benefit. They’ve just created a legacy gift of $1 million that will benefit those charities they care about most.

As always, we encourage you to seek the advice of your trusted professional advisors to make sure a CRT and other Smart Philanthropy® tools work for you and your family.