Nearly 50,000 women served in the Canadian army, navy and air force during the Second World War. Women in Service – The War Art of Molly Lamb Bobak, a new online exhibition launched today by the Canadian War Museum, offers a unique perspective on the important contributions and day-to-day activities of Canadian servicewomen.

Molly Lamb Bobak enlisted in the Canadian Women’s Army Corps (CWAC) in 1942 and was appointed an official war artist in 1945. She was the first Canadian servicewoman to hold that position and would be the only official woman war artist to serve overseas, where she painted members of the CWAC in Britain and the Netherlands. Her experiences as a war artist helped establish her professionally and, by the time of her death in 2014, she had become one of Canada’s most celebrated artists.

“… everywhere you turn there is something terrific to paint. I love the army and I’ll keep on putting down what I see until the war is over…” 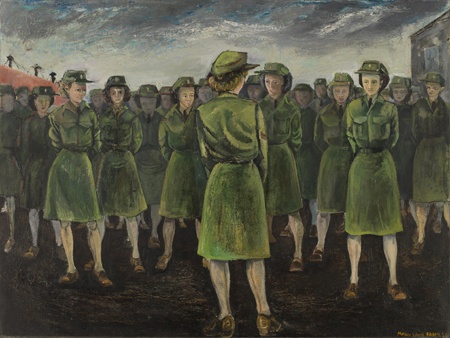 “As an official war artist who was also a member of the Canadian Women’s Army Corps, Molly Lamb Bobak was uniquely placed to capture the experiences of Canadian servicewomen during the Second World War,” said Caroline Dromaguet, Acting Director General of the Canadian War Museum. “The works in this exhibition, drawn from the Museum’s Beaverbrook Collection of War Art, contribute to a greater understanding of the CWAC’s role and impact.”

The exhibition features 19 works, selected from the War Museum’s collection of more than 100 wartime paintings and drawings by Molly Lamb Bobak. Representing everything from basic training in Alberta and officer training in Quebec, to canteens, garages, laundries and offices in England and the Netherlands, the works reveal fascinating details about the everyday lives and changing roles of Canadian servicewomen.

Women in Service – The War Art of Molly Lamb Bobak is one of several initiatives developed by the Canadian War Museum in 2020 to mark the 75th anniversary of the end of the Second World War. The exhibition is available now at warmuseum.ca/mollylambbobak.