Last January and February we published articles about Toronto with a focus on the theatre and jazz club entertainment options available to tourists and business people travelling to Canada’s largest city. Reaction from our readers was enthusiastic. When we told our colleagues at Tourism Toronto that we were planning a return trip to see Beautiful: The Carol King Story; they prepared an interesting gastronomic itinerary for us. So here goes…

Our favourite way to make the trip is with VIA Rail, with downtown-to-downtown hassle free service. If you’re travelling in the early evening, the Business Class service that includes cocktails, wine with dinner and after-dinner apéritifs is worth considering. We took an early morning train, boarding at Dorval and arriving in Union Station just before noon, ready for an afternoon of sightseeing. 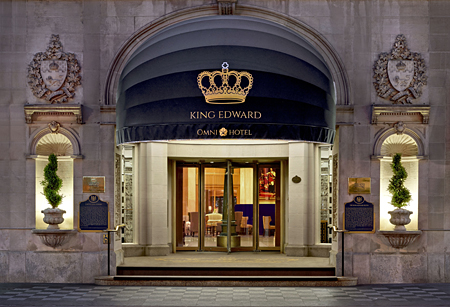 We enjoyed two nights at the Omni King Edward Hotel, which recently received a $140 million renovation

We checked into the grand Omni King Edward Hotel, located on King Street East in the heart of downtown, an easy walk to the financial district, St Lawrence Market, theatres on Front Street, The Hockey Hall of Fame; and just a ten-minute  walk from the classic Ed Mirvish Theatre and our favourite Toronto jazz club – The Jazz Bistro. Across from the hotel at 18 King Street East, we enjoyed lunch at the BeerBistro. It’s a beer lover’s paradise – with twenty-two beers on tap. Not surprisingly, many dishes are cooked with beer; and I enjoyed the best mussels I’ve ever had, steamed in Blanche de Chambly beer broth with lemon and garlic and served with fresh sourdough bread. If you find yourself downtown around lunch or before a show – BeerBistro is well worth a try. www.beerbistro.com 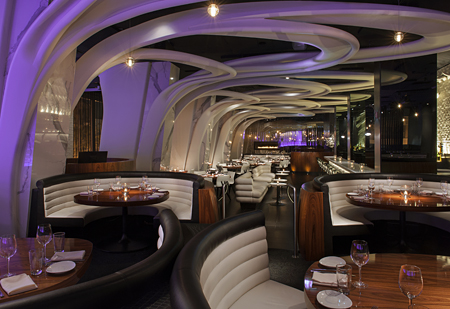 Toronto is home to some of Canada’s finest restaurants, including STK, an international operation with restaurants in New York, London, Milan, Chicago, Milan, Atlanta and Los Angeles

That evening we set off for the ever-trendy Yorkville neighbourhood and dinner at STK. STK is an international chain of restaurants that successfully brings the traditional steakhouse well into the 21st Century. STK (pronounced ‘steak’) operates in London, New York, Milan, Chicago and is favoured by celebrities because the food is excellent and consistent throughout the network.  STK caters the private loges for the Super Bowl. Located at 153 Yorkville, it’s a good idea to allow time to stroll along this fascinating street with the laneway of shops that adjoins the equally urbane Cumberland St. 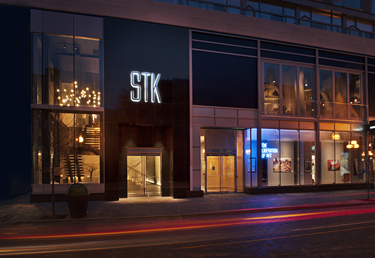 The decor of STK is striking – walls and ceilings are flowing sculptures in white, with white banquette seating offset with wood-grain tables. No matter how cool the decor – the cuisine has to be first rate for the sophisticated tastes of this restaurant’s clientele. STK has been rated “In The Top 100 Steakhouses in America” by Forbes Magazine and Zagat describes STK as “Never a dull moment”, while The Thrill List describes STK as a “Steakhouse for the Stiletto Set”. On the evening we visited; several groups of business executives were unwinding and enjoying the ambiance. It’s clearly the place to be in Toronto. 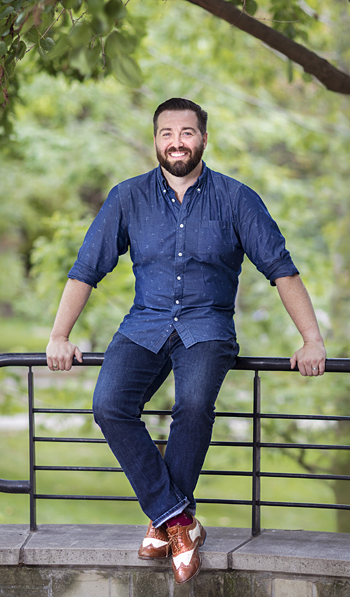 Chef Tommy McHugh brings a lifetime of hospitality experience, years of European training and a lot of enthusiasm as
Executive Chef at STK

For starters we enjoyed a delicious Tuna Tartare and Lil BRGS (sliders) of wagyu beef with a special STK sauce and served on small sesame seed buns.  Our main course was a perfectly cooked Delmonico steak and Mediterranean Sea Bass served with baby bok choy, fermented black bean vinaigrette and pickled ginger. Our side order was a decidedly decadent “loaded potato tater tot poutine”. It was delicious and fortunately we were sharing. We also enjoyed a serving of al dente Asparagus.  STK Donuts are signature miniature menu items that topped off the meal with a sweet finish, and were accompanied by maple glaze-candied pecans. That could have been enough, but we weren’t done. Chef Tommy McHugh wanted us to try his signature Sticky Toffee Pudding. Tommy’s twist on this traditional comfort food has been so popular that the company has added this dessert to the official STK menu. In a word – it was delicious and when you visit STK, at least one person has to order Chef Tommy’s Sticky Toffee Pudding.

Tommy’s family has a rich background in the hospitality business. His father owned several restaurants and clubs in Toronto, and Tommy literally grew up helping his Dad. He uses the European brigade system in his kitchen (as does Daniel Boulud). Tommy describes his management style; “We work with job titles and a clear structure in the kitchen, with 4 – 5 different stations. Our employees need to be familiar with all stations and master of one or two. We promote from within, and we have continuous recognition and promotions for our kitchen staff – so they are advancing their careers in real and measurable ways. Unlike a lot of kitchens, our staff has a full benefit system and we share a staff meal on a regular basis. It’s a formula that illustrates the hospitality maxim: ‘happy chefs = happy food = happy clients’.”

STK also has two private dining rooms that can be opened to create a larger room – ideal for family reunions or business dining. Service from the entire staff was friendly, courteous and first rate. www.STKHOUSE.COM  It’s a popular restaurant, and we recommend that you make reservations. 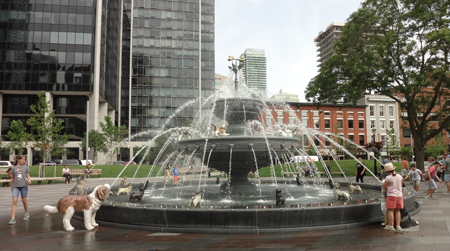 We spent the following morning meandering along Front Street, past the Flat Iron Building, and came upon a new park fountain dedicated to dogs. The Berczy Park fountain was created by Montreal sculptor Claude Cormier. The hand-painted dog sculptures give the large fountain a refreshingly whimsical quality.

We walked down to The Harbourfront, and continued past the boat, kayak and paddleboard rental locations, past the HTO Park lakefront dry beach, bandstands, a yacht marina, the Mariposa Harbour Cruise dock, and all the way to the bucolic Toronto Music Garden. This is a little lakeside oasis with a few open-air performance spaces where classical musicians perform in string quartet ensembles. It’s a peaceful and contemplative park that overlooks a marina and is surrounded by Canada’s largest city. The Harbourfront area has become a destination in itself, with a good variety of restaurants and pubs. 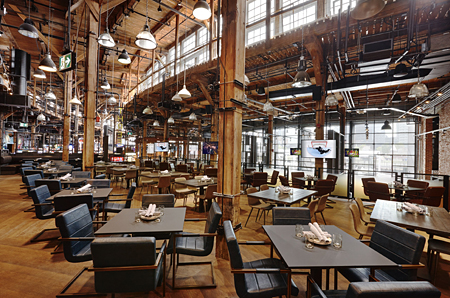 Transformed from a train roundhouse, The Rec Room
offers a unique dining experience

We visited a restaurant/amusement centre called The Rec Room that is set up within the old railway roundhouse; a heritage building that has been meticulously preserved.  The Rec Room is within 200 metres of the Rogers Centre (home to the Toronto Blue Jays), the CN Tower, Ripley’s Aquarium and not much further to the Air Canada Centre, home to the Maple Leafs and Toronto Raptors.

Once capable of servicing multiple train locomotives indoors, it’s a massive 40,000 square foot building that can accommodate 1,200 guests with a staff of 500. In addition to the restaurant function, The Rec Room is akin to an indoor amusement park, with an arcade and retro carnival-like games of skill. Marketing Manager Betty Dang commented that to their surprise – the old school midway games are the most popular. You purchase a bracelet that activates the games you select, and your score is stored on the wristband device. Once you’ve completed your circuit, players go to the ‘Trophy Room’ where their score is registered, and you can then select your prize from a wide variety of items, including the ubiquitous plush toy – just like a real midway. 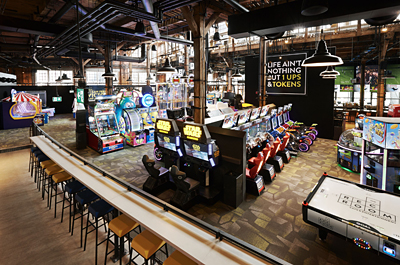 The Rec Room also offers a virtual reality game called The Void that is based on a Ghostbusters theme. We tried it and had fun blasting away at the imaginary ghosts, flying dragons, goblins and everything else that moved. A super idea if you’re travelling with teenagers or adults with a healthy sense of fun. It’s not recommended for young children. On the day we visited there were many families in the restaurant wearing their Blue Jay t-shirts and caps prior to the game’s 4pm start. With its close proximity to the other sports venues, it’s already proven to be immensely popular as a pre-game destination. Private meeting rooms and dining areas make it a unique offsite location for sales and management meetings. The Canadian-inspired cuisine of ribs, burgers, chicken and pizza is excellent. It’s worth investigating if you’re looking for a something completely different for a business outing. 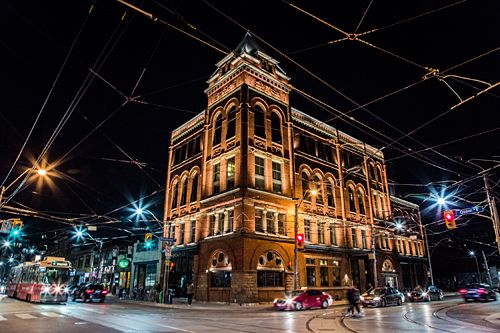 The newly opened Broadview Hotel is located in the heart of trendy Queen St. East and is already immensely popular

The Mirvish family alone operates four theatres that feature Broadway-style musicals; and only London’s West End and New York City produce more musicals and shows than are presented in Toronto. We took in Beautiful: The Carol King Story at the Ed Mirvish Theatre. It’s a grand old theatre that has been fully restored, and we thoroughly enjoyed the show that included so many hits written by the team of Carol King and her husband Gerry Goffin; including Up On The Roof, Take Good Care Of My Baby, Will You Still Love Me Tomorrow, The show wrapped up with ‘Carol’ performing songs that she wrote herself, including It’s Too Late, You’ve Got A Friend and of course – Beautiful.

Next month we’ll re-visit the always interesting Royal Ontario Museum (ROM), our visit to the fascinating Casa Loma and our dining experiences at The Drake Commissary and Ricarda’s.