Mahan Esfahani’s concert features two of Bach’s six French Suites, which contain some of Bach’s most attractive keyboard writing. The arrangement of contrasting dances, all in the same key, into a suite makes for very satisfying musical compositions. 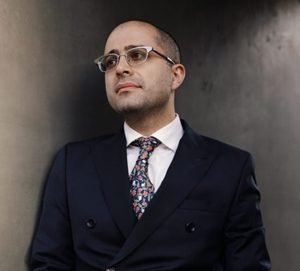 Since making his London debut in 2009, Mahan Esfahani has established himself as the first harpsichordist in a generation whose work spans virtually all the areas of classical music-making from critically-acclaimed performances and recordings of the standard repertoire to working with the leading composers of the day to pioneering concerto appearances with major symphony orchestras on four continents. He was the first and only harpsichordist to be a BBC New Generation Artist (2008-2010), a Borletti-Buitoni prize winner (2009), a nominee for Gramophone’s Artist of the Year (2014, 2015, 2017), and on the shortlist as Instrumentalist of the Year for the Royal Philharmonic Society Awards (2013, 2019).

Esfahani’s work with new and modern music is particularly acclaimed, with high-profile solo and concertante commissions from George Lewis, Bent Sørensen, Poul Ruders, Anahita Abbasi, Laurence Osborne, Gary Carpenter, Miroslav Srnka, Elena Kats-Chernin, Daniel Kidane, Michael Berkeley, and other contemporary voices in forming the backbone of his repertoire. His commitment to exploring the contemporary voice for the harpsichord is reflected in his 2020 Hyperion release ‘Musique?’ – a compilation of electronic and acoustic works including the modern revival of Luc Ferrari’s 1974 Programme commun for harpsichord and tape.

His richly-varied discography for Hyperion and Deutsch Grammophon – including an ongoing series of the complete works of Bach for the former – has been acclaimed in the English- and foreign-language press and has garnered one Gramophone award, two BBC Music Magazine Awards, a Diapason d’Or and ‘Choc de Classica’ in France, and an ICMA as well as numerous Editor’s Choices in a variety of publications including a spot in the Telegraph’s compilation of essential classical music and the New York Times List of Top Recordings.