Bitcoin which has more than doubled in price since the start of the year, continues to bounce near all-time highs outperforming all major asset classes. Yet according to one expert, the digital asset is attracting a different category of investors than during its previous spike in 2017.

“We cater mostly to high net worth individuals, traders and institutions, which is where we are seeing the most interest,” says Bilal Hammoud, CEO of NDAX/National Digital Asset Exchange. “The low volume of Google searches for Bitcoin suggests that the public still has not caught on.”

In recent months inflows into Bitcoin investment vehicles are hitting record levels. Leading hedge fund investors from Paul Tudor Jones to Stan Druckenmiller have made positive comments about the “crypto currency” launched by pseudonymous programmer Satoshi Nakamoto a decade ago. Analyst calls, such as a recent report by Citi to institutional clients, which speculated that Bitcoin could rise more than 15-fold to $314,000 during coming years, are getting increasingly bullish.

Bitcoin proponents argue that the digital asset could backstop a new financial system centered around Nakamoto’s vision of a “peer to peer electronic cash,” supplemented by “second layer solutions” such as the “Lightning Network.” Bitcoin is also said to function as a non-correlated asset class backed by an immutable public database and the world’s most powerful computer network, which gives the crypto asset “digital gold” store of wealth properties.

“Central bank money printing has been likened to “stealing money from seniors slowly.”

“The key problem that Bitcoin solves, is inflation,” says Hammoud. “The pandemic strengthens the case for Bitcoin because global central banks are printing increasing amounts of money and pushing it into the economy to keep businesses running and people employed.” Such actions, which devalue hard earned savings and pension assets have been likened by analyst Russell Napier of Electronic Research Interchange to “stealing money from seniors slowly.”

These tailwinds, and the relative dearth of places to buy Bitcoin economically give Canadian digital asset exchanges significant upside potential. For example investment vehicles like Grayscale Bitcoin Trust, which recently surpassed a stunning $10 billion of assets under management, charge a premium of as much as 40% on the Bitcoin investors buy, coupled with annual storage fees of more than 2% per year.

Private exchanges which enable users to buy Bitcoin and to store it onsite or privately, enable them to bypass those costs. However, there are risks. For one, while the price of Bitcoin has risen more than hundred-fold during the past five years, it has also lost between 80% and 90% of its value several times.  As if that weren’t enough, the Canadian market has been hit hard by scandals surrounding digital asset exchanges such as Coinsquare, Quadriga and Einstein.

NDAX’s main challenge over the near term is to build independently verifiable credibility. “Safety is our number one priority,” says Hammoud. “We hold 95%-98% of user funds in offline multi-signature wallets. That’s a fancy way of saying that your digital assets are locked up tight and will be there when you want them.”

The Alberta-based exchange, which does considerable business in Quebec, where one of their compliance officers is based,  has also prioritized adherence to rules enunciated by SOC II and FINTRAC, where it is registered as a money services business, and plans to register as a dealer with the Alberta Securities Commission. “Our goal is to implement Canada’s highest security standards, to ensure regulatory compliance and insurance protection,” says Hammoud. “However, we encourage all consumers to do their own research before investing in any digital asset.”

Hammound’s and NDAX’s efforts couldn’t be coming at a better time. During a budget update in late November the Trudeau government announced another vast expansion of borrowing and spending. This despite the fact that Canadian public, private and household sector actors owe a stunning $9.3 trillion dollars in debts. That works out to more than $1 million for each child under the age of 19. 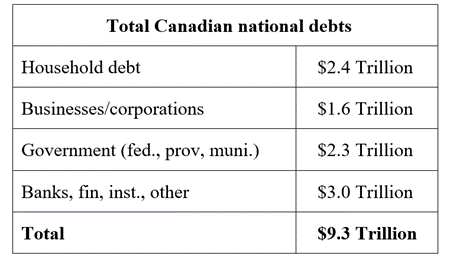 Bank of Canada Governor Tiff Macklem recently brushed off accusations that the central bank’s $154 billion “quantitative easing” (which ordinary folk describe as “money printing”) is creating inflation risks. But few who are not paid to do so, agree. As John Williams of Shadow Government Statistics noted in a famous 2013 paper, governments systematically understate consumer prices, in order to cut the cost of living adjustments they have to pay to pensioners.

Here in Canada official numbers indicate that inflation is rising by around 2% per year. However, an objective look at the broader data tells a different story. Housing and stock prices for example, both of which are excluded from the CPI calculations, have skyrocketed during the past three decades, making homes and saving for retirement essentially unaffordable for Canadian youth.

Bitcoin proponents argue that one way to judge the Canadian dollar’s performance over long periods of time is to compare it with a neutral asset such as gold, against which the loony has lost 98% of its value during the past 50 years. “With its limited supply and decentralized nature, Bitcoin makes for one of the best store-of-value assets,” says Hammoud. “Inflation and geopolitical instability are big drivers in the recent trend of US companies such as MicroStrategy and Square which invested $425 Million and $50 Million respectively in Bitcoin.”

During recent months financial services providers in the U.S. such as PayPal and Square have made Bitcoin easier to buy. While these services are not available in Canada, time will tell how much they will spark an increase in demand.