The month was June and the year was 2000. Dr. Lucy Gilbert makes the trip across the pond from London to Montreal after being offered a complimentary, no obligations trip to visit the McGill University Health Centre (MUHC). Having never travelled to Canada before, Dr. Gilbert took advantage of the opportunity and with an open mind she embarked on what would end up being one of the most significant experiences of her life.

Growing up in Singapore but with a footprint in India and England, Dr. Gilbert has called Montreal home since 2001. “When people ask me where I’m from, I usually tell them that I am a gypsy,” she says smiling. “While I was born and raised in Singapore, my family moved to India, and my studies have also taken me to England and the United States,” she states. 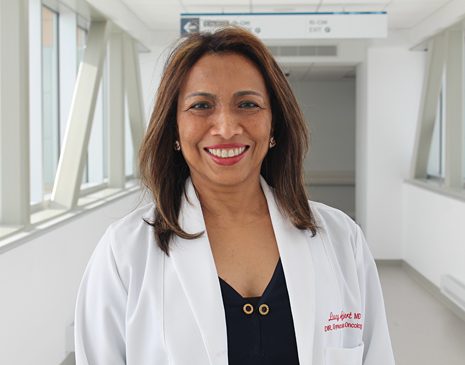 Dr. Lucy Gilbert is the Director of Gynaecologic Oncology at the MUHC and McGill University

Speaking of family, Dr. Gilbert comes from a large one. She has 6 sisters and in addition to sharing an unbreakable bond, they also share another connection – they are all physicians. “All of my siblings live in the United States and while we work in different specialities, our love of medicine runs deep,” she explains. “Our father, who was not a doctor, inspired and encouraged us to pursue our respective careers and when we were growing up, he wanted to help in any way that he could. When we needed to get up at the crack of dawn to study or get ready for school, he would get up alongside us. In fact, he would often wake up an hour earlier to turn on our water heater so that all of his girls could take hot showers,” she recalls.

Although Dr. Gilbert thoroughly enjoyed that trip to Montreal in 2000, it took her a full year to make up her mind about relocating to the MUHC. “I was a bit nervous about packing up my life in England and moving to a new city, but I am so glad that I did! I love Montreal; it has the best of Europe and North America in one place,” she says.

Dr. Gilbert is the Director of Gynaecologic Oncology at the MUHC and McGill University. She also founded the Detecting Ovarian and Endometrial Cancers Early project (DOvEE) at the Royal Victoria Hospital and leads an integrated team of medical professionals who are working to change and improve the outcome of patients who are affected by these two deadly forms of cancer. “There has been no improvement in the cure rate of ovarian cancer in 30 years and this is unacceptable,” Dr. Gilbert explains. “If you look at a cell phone or computer from 30 years ago, today’s versions are tremendously different, and these types of advancements haven’t happened with respect to the early diagnosis of ovarian cancer,” she says.

Recently, Dr. Gilbert and her team, in collaboration with researchers at John Hopkins University in Baltimore, Maryland, developed a test that provides a safe and minimally invasive method to detect ovarian and endometrial cancers at an earlier stage than is currently possible with existing tests. This has the potential to finally get the better of the third highest cancer-killer of Canadian women. While there is still much more work that needs to be done before the test is available to patients, this breakthrough brings her closer to what has been driving her over the course of her entire medical career – a cure is finally within her grasp. 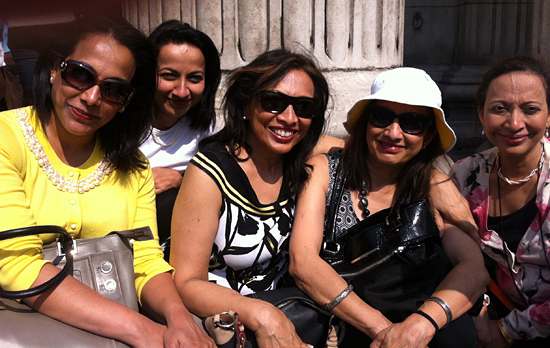 Dr. Gilbert (centre) and her four sisters – all physicians

Grateful and humble, Dr. Gilbert acknowledges how privileged she is to have such a fulfilling career. “I was taught from a young age to always find meaning in anything that you do. Every day, I have the opportunity to alleviate suffering and change people’s lives, it is so gratifying,” she says.

Like many Montrealers, there are times when she struggles with the long and harsh winters, but she has made the most of it by teaching herself how to downhill ski. “I am a thrill junky and taking up skiing has certainly helped me embrace winter more favourably!” Dr. Gilbert explains. Although she misses portions of her life in England, particularly because her daughter and son work and live in London, residing in Montreal has provided her with the best of both worlds, from professional and personal standpoints.

“I worked briefly in the United States and I struggled with their medical system,” Dr. Gilbert says. “It was one of the reasons why I returned to England because I wanted to work within a public healthcare system. Working in Montreal is so great because the medical system has the same general framework as the one in England with the added bonus of having the community’s generous financial support. This balance is extremely important to me,” she says.

With so many successes to be proud of, Dr. Gilbert has never strayed far away from her personal and professional philosophy. “It’s simple, be kind to yourself and to others,” she says.