In Quebec City it is easy to become an instant history buff or at least have your interest in the subject piqued. For example, did you know the city was founded in 1608 and, at the time, was one of the earliest European settlements in North America? I certainly did not or, if I did, I had long forgotten!

The city which was recognized as a UNESCO World Heritage Site in 1985, is roughly divided into two sections: The Upper Town where Samuel de Champlain first established a fort overlooking the St. Lawrence River and has long been anchored by the majestic Chateau Frontenac; and Lower Town which originally housed the harbour’s longshoremen, seamen and artisans of the maritime-based economy. Later on, Lower Town became populated by merchants and bankers as the local economy flourished while the seat of government was established in the Upper Town. 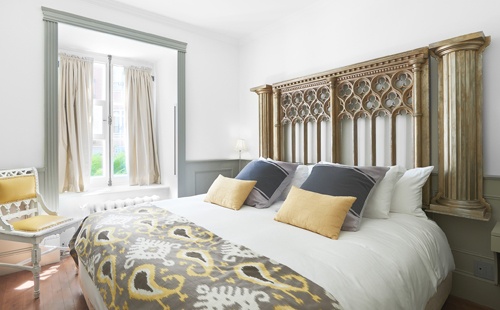 Flash forward to the 1990’s, Lower Town was largely run-down and a place that locals would avoid.

Architecturally, Lower Town is a bounty of riches with cobbled stoned streets lined with former bank buildings, historic warehouses and interspersed with ultra-modern structures (such as the Museum of Civilization) often integrated with the original 17th and 18th century structures. It is within this unique and breathtaking neighbourhood, at the base of a very steep hill known as Cap Diamant, we find the extraordinary Auberge Saint-Antoine, a member of the Relais and Châteaux network five star of boutique hotels

“In the 1990’s, you would not believe the prices these buildings were going for!” exclaims co-proprietor, Evan Price waving his hands towards the surrounding streets during a recent interview in the hotel’s appropriately named bar, Artefact. “They were practically giving them away!” 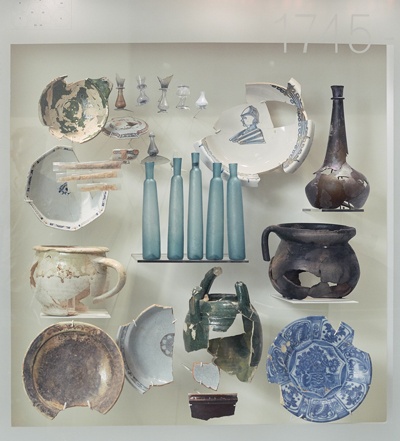 The Price family has a long history in the city, and the region, having originally settled here over 200 Years ago as Welsh immigrants whom became dominant players in the logging and forestry industry, mainly in the Saguenay and along the Gaspé Peninsula. When asked how the family made the leap from their more traditionally known business into the world of hotelier, Price recounts his immediate family’s time in Africa, where his father Tony Price was working for a Canadian government agency and raising a family along with Evan’s mother, Martha Bate Price. “There we constantly had strangers coming in and out of our home and we treated everyone like family. We’re very welcoming people. We have a strong sense of hospitality. When we returned from Africa, we had this idea of establishing an ‘urban inn’.”

Knowing the city well, in 1992 the family decided to acquire a stone warehouse in the Lower Town known as the Chillas warehouse, built for a cooper (a repairer of casts and barrels) in 1822 where they installed the auberge’s original 23 rooms. In 1996 they expanded the hotel to 31 rooms absorbing a nearby building called the Hunt House as designed by architect Thomas Hunt in 1720.

In 2003, the hotel expanded into a total of 95 rooms following an arduous and painstaking excavation of a connecting parking lot to create a more modern wing with the additional rooms and suites. During the course of the construction, the site soon evolved into a 15 year archaeological dig deemed necessary by the number of artefacts that each shovel into the ground seemed to uncover. Based on the family’s sensitivity to the city’s history, an archaeological team, mainly comprised by participants from the City of Quebec and Laval University, was engaged in order to preserve and catalogue all that was uncovered in the process. Iron keys were bagged and labeled, pieces of china and porcelain delicately packaged, religious statues gingerly wrapped, and so on. One of the prized discoveries was an actual canon used by the French along with a cannonball that was still lodged in a piece of wood it had impacted. 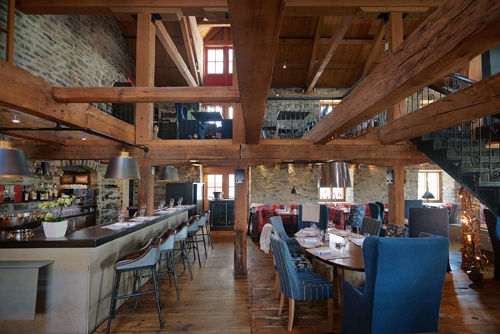 Chez Muffy is the popular bar and dining room at Auberge Saint-Antoine, named after the Price family’s matriarch

A decision was eventually made through negotiations with local historians assigned to protect these relics of national heritage, that, instead of housing these items in museum warehouses where they may have never be seen again by the public, why not create a showcase within the hotel where they would be prominently displayed? To this end, the hotel interior designers created museum quality display cases to exquisitely present the fruits of these finds to all guests and visitors to the auberge. In fact, not only are many of these items displayed in the hotel lobby but each hotel room features both a historic nameplate and a small piece of history from the excavation at each guest room’s doorway! One cannot help feeling immersed in history as a result.

In addition, if one wants to go all the way with this step back in time, guests can avail themselves of one of the 12 historic suites located in the Hunt House wing of the auberge. Here marvellously decorated rooms by the interior designer firm Décors Price Amyot Price incorporate 18th and 19th century furnishings such as four poster beds and antique writing desks while including the modern comforts expected by connoisseurs of boutique hotels such as the latest bathroom fixtures. Auberge Saint-Antoine’s overall architecture and interior design has won it international design awards and is also a member of the coveted Relais and Chateau group of hotels, one of the few in Quebec. 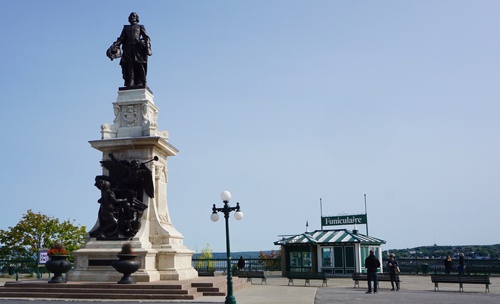 In addition to the aforementioned gathering place, Artefact, where exotic cocktails and light meals are served, the auberge also features the wonderful Chez Muffy, showcasing “bistronomique” cuisine that utilises locally-sourced foods, mainly grown on the family farm on nearby Île d’Orléans. A spectacular breakfast is served here and is included with the hotel’s Fall packages (now extending into November and December, excluding holidays) where weekday rates start at 275$ per night plus taxes for two people, including parking (as well as a daily $20 food and beverage or spa credit for those who stay two nights or more).

Quebec City is an easy two and a half hour drive from Montreal or a relaxing train ride from downtown Montreal directly to Lower Town but it is also a 400 year journey into our country’s past. Why not experience it for yourself? Tell them Samuel de Champlain sent you!

A.J. Twist is a Montreal based travel writer and photographer. Email: [email protected]

With more and more Montrealers seeking regional travel options, Quebec City’s Auberge Saint-Antoine and North Hatley’s Manoir Hovey (both Relais and Châteaux branded hotels) have teamed up to incentivize travelers to start at one hotel and travel to the other while enjoying the Quebec countryside between the destinations (a two and a half hour drive). The package includes accommodation in a luxe king room, breakfast for two, a welcome amenity, a picnic basket for two (for the trip between hotels, if you like) and complimentary indoor parking. Rates start at $350 per night. Call either hotel for details. https://www.saint-antoine.com/promotions-and-packages/quebec-staycation