1700 La Poste is pleased to invite you to an exhibition devoted to Montreal artist Geneviève Cadieux. In her photographic installations of imposing dimensions, the artist approaches the human body as a landscape and addresses large spaces under the perspective of a portrait. A selection of works executed between 1993 and 2020 brings together these two bodies of works in which Geneviève Cadieux was able to capture the passage of time with a play of scale and light. This exhibition will also unveil the new creation of the artist, Firmament.

“Cadieux does not see her work as restricted to photography, but as an artistic experience in which she engages painting through the treatment of surfaces, as well as a sculptor’s eye in the monumental presentation of her images. The introduction of palladium and gold-leaf illumination lends preciousness and originality to her work and gives it a cosmic dimension. ” – Isabelle de Mévius

Born in Montréal, Geneviève Cadieux spent her adolescence in Ottawa and studied painting there in university. Growing up, she was immersed in the world of contemporary culture thanks to her father, Germain Cadieux. A film buff, he made Ottawa’s Towne Cinema into a repertory venue and directed its program of French, European and American movies. 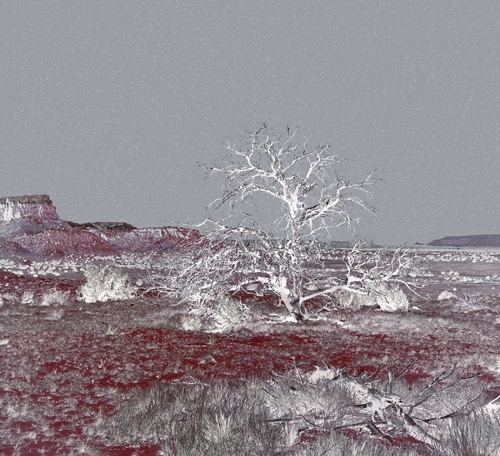 Cadieux’s photographic work is rooted in the poetic experience of those first encounters with film, where close-ups establish a mysterious and powerful connection between the character on the screen and the viewer. We forget ourselves, entering the actor’s performance through the tightly framed shots and identifying with the emotions portrayed. Throughout her work, Cadieux invites us to feel the sculptural monumentality of the image of the face, body or landscape that she confronts us with.

At the start of her career, Cadieux oriented her work around the study of the body and made numerous portraits of family members and acquaintances. She began in 1977 with shots of parts of the body, then turned to portraits of faces and emphatically frontal half-body images. The poses of her staged subjects often suggest a breakdown of communication; they seem to be suffering, on the verge of expressing their pain but unable to do so, trapped in an in-between. A scar or a bruise is the sign of an incident that is trying to mend itself. The subject is caught up in an internal experience, seemingly holding back emotion.

Her large photographs often consist of two similar images placed side-by-side, as if to be understood as mutually explanatory. A color photograph of a landscape is juxtaposed with its double in black and white; the artist calls attention to the effect of light on the photographed subject. The corollary allows a greater interiorization and a more intimate perception of the image, revealing it from a different angle; the viewer is caught up in this relationship and the tension it establishes between the two images.

Cadieux’s recent work marks a passage from the representation of the body-as-other to that of landscape approached as portraiture.

Since the early 1980s, Cadieux has participated in numerous group exhibitions in Canada, the United States, Europe, Australia and Japan, as well as major art biennials. Since 2002, Cadieux has been Associate Professor of Photography in the Faculty of Fine Arts at Concordia University in Montreal. She has taught as a visiting artist at the College of Architecture, University of Illinois, Chicago (1998), the Universitat Politècnica de Valencìa, Spain (1997), the École d’art de Grenoble, France (1996) and the École nationale supérieure des beaux-arts in Paris (1993-1994).

Cadieux received the Governor General’s Award in Visual and Media Arts in 2011. She was named a Fellow of the Royal Society of Canada in 2014, and was granted the Prix Paul-Émile Borduas, Québec’s most prestigious arts award, in 2018. Geneviève Cadieux is represented by Galerie René Blouin in Montréal.

An exclusive documentary about the artist, directed by Bruno Boulianne, will  be shown during the opening hours.

To ensure a safe visit, several measures have been implemented in accordance with the standards decreed by public health. In particular, wearing a mask will be compulsory throughout your visit. Capacity limits will be respected. You are welcome to reserve your place to visit the exhibition.