Perhaps you are disappointed that your bucket-list tour of the Napa Valley was cancelled due to your inability to cross the US border, or that your planned Fall bike trip through the Loire Valley might not look all that prudent under the circumstances? Well, fear not! The Niagara Wine Region of Ontario has got your back! With over 88 wineries to choose from complete with rolling hills of vineyards and crisp country air, you may even forget you’re in Canada! Certainly I, for one, was amazed with what I discovered in this area anchored by Niagara-On-The Lake during a recent trip to Toronto. 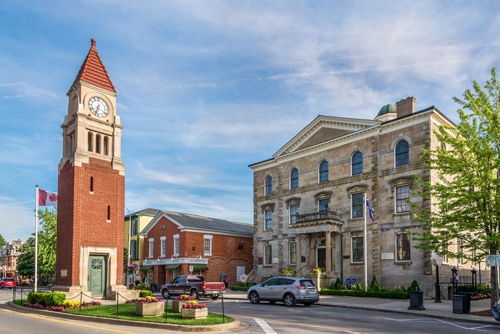 Picturesque Niagara-on-the-Lake is an ideal base camp to enjoy visiting the surrounding wineries
Photo: Shutterstock

While planning my trip to the Big Smoke, (I opted to get there by train which featured socially-distanced seating and strict mask enforcement throughout the journey) my hosts at the other end were insisting that a day trip to the Niagara region would be an excellent idea. I finally relented, and on a Saturday the four of us (my hosts, their very cooperative dachshund and I) bundled into their Audi and hit  highway 403 headed west for the one and a half hour drive (which can take up to three hours, depending on the traffic) towards Niagara.

We exited the highway at Fruitland and found ourselves almost immediately immersed in the Peach Capital of Canada with orchards of trees by the road and inviting fruit stands along the way. Did you know that here are 15 different varieties of peaches to be found here? I was shocked to learn that there were more than 1! My hosts tell me that the annual peach festival held every August can be a fun event to visit as well.

Further to the south, past the town of Grimsby, we began to enter wine country first indicated by a monstrous faux- chateau at the base of the Niagara Escarpment overlooking its vineyards. I was getting nervous that I was in for a day of gaudy attempts to reproduce the aforementioned Loire Valley but I was pleasantly relieved that this first vineyard was the exception rather than the norm. As we drove deeper into the region, more authentic settings featuring converted barns (like the Between the Lines Winery) and country estates (Frog Pond Organic Winery) dominated the landscape intertwined with the massive modern architecture of well-known vineyards such as the Jackson-Triggs Niagara Estate Winery or the Wayne Gretzky Estates Winery. 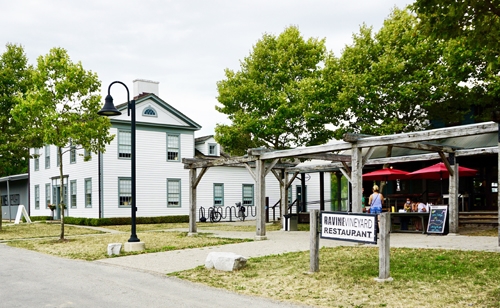 Our destination today was the Ravine Vineyard where we were set to meet up with family members of my hosts for a mid-afternoon lunch.  Here we sat outside in a large covered patio on picnic tables with a stunning view overlooking their acres of vineyards growing the next crop right before our eyes. A bubbly server suggested that today was the perfect day to try their sparkling rosé which sounded like a great idea to all present! And it was! It was a citrusy and refreshing pleasure on a summer’s day. To accompany our imbibing we also ordered two of their thin-crusted pizzas which arrived piping hot right out of their stone ovens and were scrumptious.

It is here that I realized that these wineries were quite large businesses where their restaurants, wine cellars, wine tastings and wine stores really did make for an action-packed afternoon. I was beginning to regret we were not going to be spending more time in the region and made a personal pledge to do so next time.

Next we headed along the Niagara River parkway where my host gave me a historical review of the Battle of 1812 when the newly formed US army fought the British Loyalists on the shores of this waterway for new territory that would become Canada. History buffs can get their fix at Old Fort Erie here where tourist guides dress up in authentic period costumes to re-enact the life of a British garrison in 1812. We did the quick alternative by visiting the Brock Monument which pays tribute to the British General, Sir Isaac Brock, who lost his life at the Battle of Queenston in 1812.

Heading towards our final destination we made a quick pit stop at the World’s Smallest Church, whose official name is the Living Waters Wayside Chapel, where I am told actual weddings are held (albeit small ones, as it can only hold six people!) 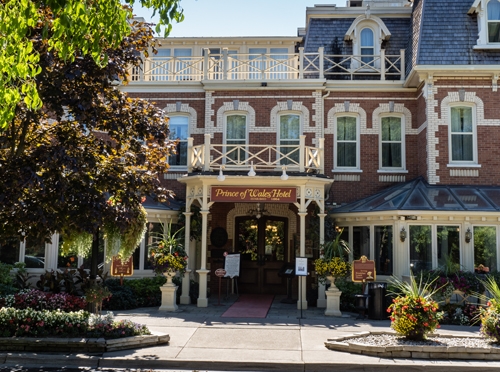 Finally we arrived at the region’s main town, Niagara-On-The-Lake (NOTL). Clearly this is where most of the day visitors (and overnight guests) head to as this place was busy! Finding parking was a challenge and social distancing on the narrow sidewalks was virtually impossible (I think most of Toronto was here on the day we visited) but the town’s Georgian-style architecture and charm did win me over in the end.

Niagara-On-The Lake would be one’s ideal base camp from which to conquer all of the wineries that you can manage depending on the length of your stay in the region. Delightful accommodations here include the exquisite Charles Hotel which features an outstanding breakfast and the more modern 124 On Queen which offers a spa and rooftop patio right in the heart of the action. Its in-house restaurant, Treadwell Cuisine, is a foodie’s treat. Other restaurants of fine repute include the one at the Trius Winery where local oenophile (and my guide for all things NOTL), Kevin Fitzpatrick, recommends the Clarke Farm pinot noir (“it goes with everything”) or the farm-to-table menu at the Peller Estates Restaurant (“certainly upscale but totally worth it”).

So whether you have the time for a day visit or want to plan an entire long weekend (or a week) in the region, Niagara On The Lake and environs has enough to keep you well fed, entertained and certainly well-imbibed, for your entire stay!

A.J. Twist is a Montreal based travel writer and photographer.  ajtwist@me.com

The magnificent Niagara and Horseshoe Falls respectively on the U.S. and
Canadian sides of the border
Photo: Shutterstock