When travelling to New York City, it is always a coup to find accommodations within walking distance of magical Times Square. On our recent trip we truly hit the jackpot with the famous Algonquin Hotel (www.algonquinhotel.com). Located in the heart of Midtown Manhattan, this jewel of historic New York hotels commands the center of 44th Street, two blocks from Times Square.

The Algonquin first opened its doors in 1902. Today it is part of the Marriott chain’s Autograph Collection, an evolving ensemble of strikingly independent hotels. Each destination has been selected for its quality, bold originality, rich character and uncommon details. From near to far, iconic to historic, the result is an array of properties that is nothing less than unique. The Algonquin Hotel is the first New York City property to become a part of the collection. “The Autograph Collection is a very cool brand,” says Nicholas Sciammarella, manager of marketing and e-commerce. “Each hotel in this group is really unique and different to stay at.”

For 100 years, the Algonquin has been greeting and lodging the country’s most prominent writers and literary personalities, as well as the leading figures of the American stage. The hotel is best known, perhaps, for the members of the Round Table, a group of luminaries who had in common both the ability to fire blazing witticisms and to withstand being on the receiving end of them. The tone they set during their daily meetings set the literary style of the 1920s. After World War I, Vanity Fair writers and Algonquin regulars Dorothy Parker, Robert Benchley and Robert E. Sherwood began lunching at the Algonquin. Though society columns referred to them as the Algonquin Round Table, they called themselves the Vicious Circle. “By force of character,” observed drama critic Brooks Atkinson, “they changed the nature of American comedy and established the tastes of a new period in the arts and theatre.” 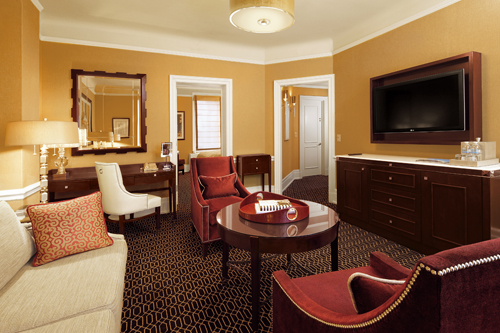 Each of the 181 rooms and 25 suites features a comfortable well-lit work desk, as well as complimentary Wi-Fi. Always one step ahead of everyone else, the hotel was the first to offer accommodations to actors and single women travellers. We stayed in a very comfortable one bedroom suite named the Robert Sherwood Suite.

Delighting thirsty revelers when it opened at the demise of the Prohibition in 1933, The Blue Bar has moved – both physically and eruditely – through decades of Times Square hotel bar trends. There is also The Round Table Restaurant and the casual Lobby Lounge.

As a cat lover I was eager to meet Matilda, the house cat. She is a real beauty and can be found sleeping in atop her cat house at the front desk or making her way through the different cat doors on the main floor. Matilda is a large ragdoll cat, soft as velvet. Operations manager Abeer Soliman was kind enough to bring her out so I could pet her.

For many years the history of The Algonquin Cat was believed to have its origins in the 1930’s, when a stray cat came wandering into the hotel for food and water. After the hotel acquired an out-of-print book written by the hotel’s first general manager, Frank Case, a chapter was discovered about a cat named Billy. Based on the timeline of the book, the hotel is now proud to say the lineage of The Algonquin Cat dates back to the early 1920’s. Two days after Billy passed, a stray cat wandered into the hotel and The Algonquin welcomed Rusty. The famous classical actor, John Barrymore, was a resident at the time in the early 1930’s and Rusty was renamed Hamlet in his honor. Hamlet is said to have been Barrymore’s greatest stage role. The hotel has had a total of 11 cats, including Billy. The lineage includes seven Hamlets and three Matildas. Each cat that has reigned at The Algonquin has been a rescue. In 1980, author Hilary Knight immortalized The Algonquin Cat with his cartoons for a children’s book on which he collaborated with Val Schaffner. The current Matilda began her residence in December 2010.

Today, Matilda is looked after by the hotel’s Chief Cat Officer, Alice De Almeida. The hotel’s executive chef cooks her special meals on holidays. She receives fan mail and gifts constantly, from around the world, including Japan, Australia and Russia. Matilda can be found on Facebook, Twitter and Instagram. She can also be reached via e-mail: [email protected].

Matilda lives in a custom-made pet home perched atop the front desk. She freely roams the luxurious property (except the kitchen and dining areas), takes plenty of catnaps (which are in her job description), and receives fan mail and gifts from all over the world (including the aforementioned pet home). We got to pet her a few times.

I received a copy of a book about the hotel when I checked in called the Algonquin Kid: Adventures Growing Up In New York’s Legendary Hotel. The author is Librettist/Lyricist Michael Colby, whose grandparents Mary and Ben Bodne, Southern Jews, owned the hotel from 1946 to 1987. As a kid, Colby and siblings visited their grandparents every weekend. Colby took up permanent residence in the hotel at the age of 18 and made his way into the theater world as a librettist, composer and lyricist. His musical, Charlotte Sweet, an all-sung, all-rhymed original musical with libretto by Colby and music by Gerald Jay Markoe, received three Drama Desk Award nominations and was critically lauded as “adorable, strange and delectable” by the New York Times.”

The book also reveals how the Bodnes turned the hotel into a haven for victims of 1950s McCarthyism and a home away from home for such Black Americans as Ella Fitzgerald, Roy Wilkins, and Maya Angelou. I could not put the book down and finished it before checking out. Colby is an excellent storyteller. Colby grew up on Long Island. He, his parents, and two younger brothers, Douglas and David, looked forward to those weekends with the Bodnes who made room for them in their huge suite on the 10th floor.

If you have never stayed at the Algonquin before, this book will make you want to. It is available at www.amazon.com and www.michaelcolby.com.